Weekend of responsibility and pop culture

In terms of superhero type material, I watched Superman IV: Quest for Peace on Thursday evening (I was too tired and in a bad mood to work on my Girlz ‘N’ Games). Yeesh, that film really proves how the Superman series decreased in quality. Forget rotating the world backwards. To defeat his new nemesis Nuclear Man (who is utterly useless when not exposed to the sun), Superman moves the moon to cause an eclipse – forget damage to the world’s tidal systems! And Nuclear Man drags Supes’ love interest into outer space and she’s perfectly fine, despite the lack of oxygen. 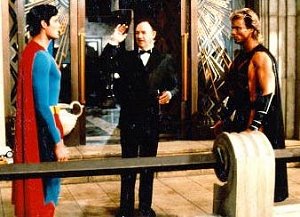 On Sunday, Batman Begins was on TV and I felt compelled to watch that again. I still have mixed feelings about the film, especially since they wasted Scarecrow, one of my favourite ever Bat villains. After the film finished I just had to load Tim Burton’s Batman in the DVD player and watch his far more iconic, dreamlike interpretation of the death of Bruce Wayne’s parents.

Batman Begins sequel, The Dark Knight is supposedly beginning filming soon. According to the very reliable LatinoReview, although district attorney Rachel Dawes WILL be back, Katie Holmes won’t be playing her. Instead, we can look forward to Heath Ledger as the Joker, as well as (fill-this-space) as Harvey Dent, the future Two Face. Apparently Matt Damon has turned down the silver-dollar flipping, split-personality role (a pity!) but Josh Lucas, Edward Norton and Ethan Hawke could be circling.

Now if only they'd release a free-roaming GTA-style Batman video game (Superman and Spider-Man ahve them) and we'd be sorted.

Otherwise, this weekend, Paul and I did the responsible, grown-up thing and finally opened investment accounts, putting aside a chunk of cash to grow interest. I was further impressed with myself on Saturday. I made and cooked a braai for 5 people, and the fire and meat were perfect.

In terms of gaming, Paul and I finished the Greece section of Titan Quest on Epic difficulty. It is my mission to take my battlemage Gothicus to the post-expansion level cap of 75. Currently I’m on Level 40.

I saw on Lord Spaceman’s blog, that BT Games at the Pavilion was having a games sale, so we checked it out. Although the PC selection wasn’t that great, plenty of PS2 games were reduced to R100-R150. I picked up BloodRayne 2 and the cartoony tribal Tak: The Great Juju Challenge, which apparently has a fun, genuinely co-operative mode. With all the next-gen hoopla, my plan is to snatch up a number of reduced PS2 games worth owning. I’m waiting now for Bully and Justice League Heroes to come down. And the Silent Hills or Forbidden Sirens if I come across them.

In terms of movies, currently there are 3 on circuit that I am really keen to see – Blood Diamond, The Prestige (Hugh ‘Wolverine’ Jackman and Christian ‘Batman’ Bale in a Christopher Nolan film!) and Apocalypto – my sister saw Mel Gibson’s film this weekend and thought it was amazing; better than The Departed in fact.

Within the next 7 days I’m hoping to have ticked at least 2 of the above off my Watch List.

EDIT: Oh yes, I resisted the Exclusive Books Summer sale, but while in-store I followed the recommendations of several people and picked up a copy of Ursula Le Guin's Earthsea Quartet. My to-read pile is ever growing;)

Oh, and I ordered my LCD flatscreen Dell monitor, which should be delivered within the next 15 working days. Finally I'll be able to rearrange my desk and make more space for my peripherals.
Books and comics Film Gaming Personal