Showing posts from January, 2011
Show all

Movies out in South Africa today: a princess, a monster and plenty pills

It's all about weird, wonderful and pill-popping women at South African cinemas today.

Tangled: Disney (not Disney-Pixar, mind you) does Rapunzel. Finally. Screening in 2D and 3D is this CGI-animated adventure loosely based on the classic Brother's Grimm fairytale. Carrying on from The Princess and the Frog, Tangled is a return to old school Disney entertainment for the whole family, although - and the trailers sneakily omit all reference to this - the film is actually an Alan Menken musical. Mandy Moore voices Rapunzel while Zachary Levi is the roguish thief who stumbles onto her tower prison.

Tangled is definitely my movie pick of the week, and I'll likely seek it out in 3D. Although the trailer was horrible - trying too hard to be sassy and zany - the finished film has released to surprisingly massive acclaim. Tangled is 89% Fresh on review aggregator site Rotten Tomatoes, where it is being heralded as a visually stunning return to the glory days of Disney animation.

The Oscar and Razzie nominations: Best and worst movies of 2010? 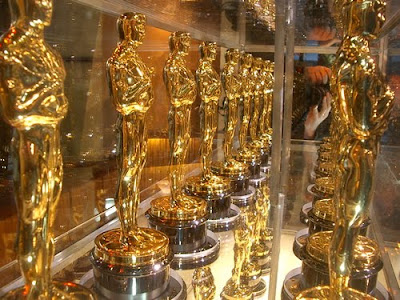 You know, you can increase the number of Best Picture nominees to accommodate those rare award-worthy blockbusters the public know and support (even if they have zip chances of winning). You can even introduce a slight format change. Still though, the Academy of Motion Picture Arts and Sciences cannot escape predictability. So once again, the big nominees for the 83rd Annual Academy Awards include an inspirational sports story, a period-set biography of a famous historical figure, a Coen Brothers release, something British, a down-in-the-dumps indie family drama and a topical tale centred on issues that already send the Media into a debate frenzy.

I love watching the Oscars and I'm exceptionally happy that I'll be in the position to watch many of the big nominees in the coming weeks - well, the ones I haven't already seen - before the 27 February results ceremony. However, I generally prefer to avoid the online speculation in the weeks and months beforehand, largely because…
Post a Comment
Read more

Although it certainly won’t change the world, Easy A puts wit and intelligence back into the high school comedy subgenre. If you enjoyed the likes of Bring It On, Clueless, 10 Things I Hate About You and Mean Girls, you’ll get a kick out of this tale, which, unlike many sex-centred teen comedies, places emphasis on playfulness as opposed to crassness.


Emma Stone heads up a very likeable cast as mature-for-her-age Olive Penderghast. For some inexplicable reason, the appeal of svelte and witty Olive is lost on high school boys and she’s a social nobody until a rumour spreads that she’s lost her virginity. From there the little white lie mushrooms into a reputation-destroying web of dishonesty. However, for Olive even bad attention is better than no attention at all, and she revels in her notoriety – donning suggestive outfits, pasting a Scarlet Letter onto her clothes (inspired by her English set novel) and pretending to bed many of the school’s saddest outcasts to help boost their socia…
1 comment
Read more

I was completely unaware of The Warrior's Way until the trailer sprang on me during a recent trip to the cinema. Certainly not for everyone, this mashing together of fantasy, martial arts action and Western conventions looks geek-tastically ridiculous - like the filmmakers eavesdropped on a group of fantasizing fanboys and then scripted their movie. Surprisingly, almost, The Warrior's Way isn't a comic or video game adaptation.


Korean superstar Jang Dong-gun stars as Yang, a fierce swordsman and deadly assassin who finds himself on the run after refusing to kill a baby. He crosses the Pacific and joins a carnival in a dilapidated Badlands town. He finds contentment, and maybe even love, in his new home - but his bloody past soon catches up with him. Geoffrey Rush and Kate Bosworthare inhabitants of the town, while Danny Huston is a vicious cowboy villain.

I'll admit The Warrior's Way could be utter junk. And I certainly wouldn't advice watching it except on a ha…
1 comment
Read more

The Next Three Days - Probably the biggest, dumbest and most blockbustery of the new movie releases is this Prison Break-esque thriller, in which Russell Crowe refuses to trust in the justice system and instead decides to break his wife (Elizabeth Banks) out of prison while she awaits trial for murder. You know, as one does in such situations. To accomplish this, Crowe turns to hardened criminal and frequent jail breaker Liam Neeson.

The Next Three Days has a solid cast (Brian Dennehy and Olivia Wilde also appear) but the big question is whether this remake of a French film can overcome its mind-numbingly stupid premise? The answer is "kinda." The Next Three Days is a critic-splitting 48% Fresh on Rotten Tomatoes. Some reviewers have called it likeably acted and edge-of-your-seat suspenseful, especially in the second half. Othe…
Post a Comment
Read more

Girlz 'N' Games comic #83: The Girl Who Succumbed to Overkill

I told my long term readers that Girlz ‘N’ Games would be running its own Millennium Trilogy and this new comic delivers on that promise. GNG #83 rounds off the 3-part series (see Part 1 and Part 2) inspired by Stieg Larsson’s spectacularly successful crime thriller novels – and their movie adaptations.

I jettisoned my original strip concept when, towards the end of last week, the first images of the American Lisbeth Salander appeared online. The English language adaptation of The Girl With the Dragon Tattoo is only set for release on 21 December, and is still filming, but W Magazine managed to secure an exclusive interview with director David (Fight Club, Se7en, Social Network) Fincher, as well as an exclusive photo shoot with actress Rooney (Nightmare on Elm Street, Social Network) Mara, who stars as enigmatic goth hacker, Lisbeth in the movie.

I was a huge fan of the subtitled Swedish version of The Girl With the Dragon Tattoo, so I’ll certainly be watching the highly anticipated Ame…
Post a Comment
Read more

Continuing the recent Trailer Tuesday trend of profilingsome of 2011's big alien-centric movie releases (and there are a helluva lot of them), today we're looking at sci-fi geek comedy Paul.

R-rated Paul stars - and is written by - Shaun of the Dead and Hot Fuzz's Simon Pegg and Nick Frost (both of whom are prolific Twitter users out of interest). The film co-stars Jason Bateman, Kristen Wiig, Bill Hader and Sigourney Weaver, features the voice of Seth Rogen as the title character, and is directed by Superbad's Greg Mottola (instead of Pegg and Frost's frequent behind-the-camera collaborator, Edgar Wright).


Paul centres on 2 best friend British geeks (Pegg and Frost) who are fulfilling their lifelong dream of road-tripping across America to get to San Diego Comic-Con. Their journey takes them through "UFO country" and in Area 51 they encounter a real alien, Paul (voiced by Rogen) - who couldn't be more different from E.T. With Paul in their camper van, …
1 comment
Read more 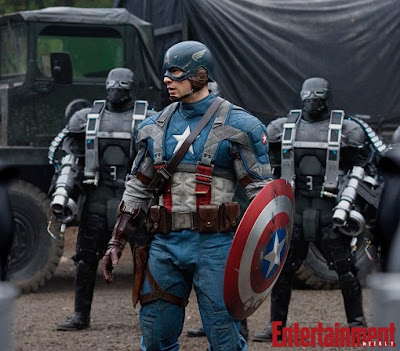 Towards the end of last week, the first official "in costume" pics were released for 3 of the most highly anticipated upcoming movies of the next 18 months: Captain America: The First Avenger (releasing 22 July), the American adaptation of The Girl with the Dragon Tattoo (21 December) and the Spider-Man reboot (releasing 3 July 2012). And damn if I'm not blissfully happy with each of these first looks.


Entertainment Weekly scored this first pic of Cap in full costume, after we'd only been exposed to the closely matching concept art before. Initially I was resistant to Chris Evans (who already has played The Human Torch in the Fantastic Four movies) claiming another icon of the Marvel universe for himself, but in every image I've seen he has increasingly looked the part - being completely devoid of Johnny Storm's cockiness.

I've blogged before about the new Captain America film and why you should be excited about it. For the record, Captain America: The Firs…
Post a Comment
Read more

Movies out today: Pony up for high school sluts and alien invaders

Easy A: My pick of the new releases is this high school comedy in which a nobody (Emma Stone) embraces her new notoriety as a slut after pretending to bed - and boost the reputations - of the school's biggest social outcasts. As rumours of her promiscuity spread, Olive even goes so far as to don a red A in reference to the classic adultery-themed novel, A Scarlet Letter, that her class is studying. Of course, Olive soon learns that bad reputations are very difficult to shake once you have them, and they can ruin your chances at true love.

Twenty movies to look forward to in 2011: January - June

I initially started this post with the intention of profiling my Top 20 Most Highly Anticipated films of 2011. However, as I scanned the release schedules, I realised it was going to be a challenge just to whittle my selection down to 20 for the first 6 months of the year. However that still seemed like a more realistic goal than attempting to cover the entire year, so yeah, there will be 2 Top 20 lists covering 2011 in 6 month increments.

I'm certain I've missed some goodie releases with this list - not only am I only profiling the films that appeal to me and/or have piqued my interest, but sleeper hits always pop up from nowhere every year. Also, bearing in mind that South Africa often receives movies much later than the United States, several of these movies have already released overseas in 2010. 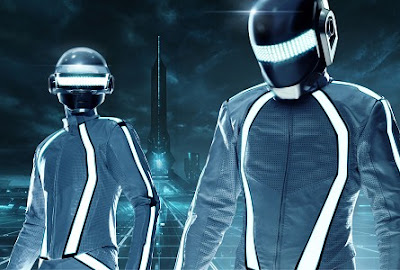 I just realised a glaring omission from my Best & Worst of 2010 film awards posted last week - and that's the best score and/or soundtrack from a movie released during the last year. I'm something of a score/OST junkie (it's my favourite music to work to) so it's definitely a category that should have received a mention.

For the record, Awards Daily - which tracks all the award season love from the various critics' societies and film bodies - has the following listed as their big 2010 contenders.