- August 27, 2010
Seven new films open in South Africa today, and considering I'd be content catching over half of them, I thought I'd do the weekly release rundown a little differently this time. First up though are the movies that have done little to catch my attention.

These include romantic comedy Just Wright, starring Queen Latifah and Common as a no-nonsense physical therapist and injured basketball star respectively (49% Fresh at Rotten Tomatoes). Then there's Bollywood drama Aashayein, about a compulsive gambler (John Abraham) who is forced to reassess his life when he learns he has only three months to live. Sonal Sehgal and Anaitha Nair co-star. Finally there's Bad Lieutenant: Port of Call New Orleans, the first of two films opening today that star Nicolas Cage. A kind of, though denied, remake of the controversial Harvey Keitel movie, this Werner Herzog crime drama focuses on a corrupt cop struggling with drug addiction. The new Bad Lieutenant has been highly acclaimed, scoring several prestigious film awards nominations, a spot on many critics' Best of 2009 lists and a Rotten Tomatoes score of 87%. Eva Mendes and Val Kilmer also star.

Moving on to this week's more high profile, and interesting, releases:

The film: The Sorcerer's Apprentice

What is it: The team (including uber-producer Jerry Bruckheimer and Walt Disney Pictures) that brought audiences the National Treasure franchise brings you the tale of a talented sorcerer who enlists an apparently very ordinary, and sceptical, college student (Jay Baruchel) to be his apprentice in the magical battle between good and evil. Loosely based on the Sorcerer's Apprentice segment of Fantastia, which is in turn based on the orchestral work by Paul Dukas, and the 18th century ballad by Johann Wolfgang von Goethe.

Why watch it: With the Harry Potter movies almost over, it's best to get your family-orientated action-fantasy kicks where you can. And The Sorcerer's Apprentice is certainly a big budget affair with a lot of blockbuster pedigree involved (Cage can be hit-or-miss but for the record the film also stars Alfred Molina, Monica Bellucci and Alice Krige). The special effects in The Sorcerer's Apprentice look pretty damn nifty too. You can also read my initial thoughts on the movie, and watch the trailer, here.

What is it: Return to the planet of Pandora and re-experience Jake Sully's (Sam Worthington) life- and consciousness-changing adventure with the Na'vi people eight months after the initial release of James Cameron's groundbreaking action sci-fi epic Avatar. Avatar is, of course, the highest grossing film of all time - as well as a multi-Oscar winner, for Art Direction, Cinematography and Visual Effects (My Avatar review here). Now the film is being re-released worldwide today in select 3D cinemas, with a further 8-9 minutes of action-packed footage integrated into the film.

Why watch it: On the big screen and in 3D is how Avatar is best viewed, and this is likely to be your last chance to experience the film this way for a very long time. Also, although some people may scoff at this claim, 8-9 minutes of additional footage can make quite a big difference to a film. Personally I've yet to see an extended edition of a film that didn't improve on the original cut. And this is especially true of James Cameron's Director's Cuts.

Why watch it: The predominant draw here is the film's top cast. Also, it looks like it will be interesting to watch wide-eyed Seyfried cast aside her "nice girl" movie image and instead play the cunning, manipulative seductress.

What is it: A historical drama set in Roman-controlled Egypt during the 4th Century ADE. Directed by acclaimed Spanish director Alejandro (The Others, The Sea Inside) Amenábar, Agora centres on Hypatia (Academy Award winner Rachel Weisz), one of the first notable female mathematicians, philosophers and astronomers, who found herself a polarising figure in the midst of political and religious turmoil - as old Roman paganism and science clashed with the new fundamentalist Christian faith.

Why watch it: The talented combination of Amenabar and Weisz is enticing to begin with, but Agora - the highest grossing film in Spain in 2009, and the winner of 7 Spanish Oscars, the Goyas - appears to be a VERY well-made, authentic-looking, sandals-and-togas film... if the trailer is anything to go by. Considering that these type of historical dramas are hardly ever made these days because of the production scale and large budget required, Agora's release is to be embraced, especially if you, like me, love this old school movie genre - that includes the likes of Ben-Hur, The Robe and Quo Vadis.

Rotten Tomatoes rating: 53% Fresh. Expensive looking yet thought-provoking, with gripping performances; although for some it's tediously boring, meandering and uninvolving. 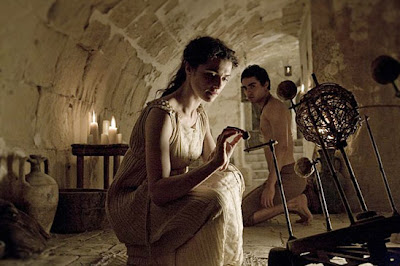 Anonymous said…
Just so you know, when one runs a search of the word on your blog, the word "forgettable" comes up in every post, for every review. For a professional writer, thats pretty disappointing. I recommend a thesaurus. :/
2:34 PM

Al said…
When one runs a search for "Anonymous" in the comment authors, the dumb comes up every time. Should we also run searches for "the" and "movie"?

Words are there to be used, aren't they? Your writing and reviews are great.
2:48 PM

MJenks said…
Chloe:
Why watch it:

There's been a lot of buzz on this movie...via Mr. Skin. He does a radio segment here every Tuesday, and I perked up when I heard that this was one of his top movie picks and the reason(s) why.
9:02 PM

MJenks said…
@ Anonymous: Just so you know, when one runs a search of your name on the internet, your name pops up with every lily-livered, backbiting comment on the blogosphere. I recommend a backbone.
9:03 PM

Brandon said…
If you watch Bad Lieutenant, keep in mind it is a black comedy. Well, either that or I'm crazy. Nonetheless, I found it hilarious.
3:33 AM

Dante said…
This comment has been removed by a blog administrator.
12:48 PM

FLJustice said…
I saw Agora when it first came out in NYC and agree it was a beautifully shot movie. I loved Weisz' performance as Hypatia. Amenabar distorted some history in pursuit of his art. The Great Library didn't end as he depicted and Synesius wasn't such a jerk. However, that's what artists do. I don't go to movies for accurate history. For people who want to know more about the historical Hypatia, I highly recommend a very readable biography by Maria Dzielska called Hypatia of Alexandria (Harvard Press, 1995.) I also have a series of posts on my blog on the events and characters from the film - not a movie review, just a "reel vs. real" discussion.
5:15 PM

Pfangirl said…
Anonymous, I'm prepared to accept your criticism but it didn't need to include the thesaurus comment. That's just spiteful! And hiding your identity behind anonymity does nothing to reinforce the legitimacy of your comment. For the record, my reviews are treated as independent entities so repeat adjectives are very likely to happen, especially since so much of what Hollywood produces is forgettable.

MJenks, to my knowledge Ms Moore doesn't have a problem getting nekkid in her movies. Boogie Nights comes immediately to mind:)

Brandon, I keep hearing how funny Bad Lieutenant is - in a dark, twisted way. So clearly you're not alone. I wonder what the filmmaker's intentions were though?

FLJustice, thanks for commenting. I think I'm going to catch Agora on Wednesday, and then give your blog posts a read. I must say I'm especially excited to see the Alexandrian Library and Lighthouse depicted onscreen.
9:20 PM

Dante said…
Percy Jackson is my guilty pleasure. That being said percy is better. Mages are gay. :P
12:50 PM