Happy to be Expendable

- August 09, 2010
Right, now I know I said I wasn't going to be blogging today but then I thought this was too cool not to share.

It turns out that for the past few months, I've been received a hefty chunk of traffic from the official Expendables movie website. I was pleasantly... or more accurately, ecstatically... surprised to find that my Trailer Tuesday blog post on the film is listed as the first News item on the site. Which, of course, is pretty damn awesome! A huge thank you must go to whoever it is at Lionsgate, or whoever makes the decisions regarding their website content, for linking to my blog. 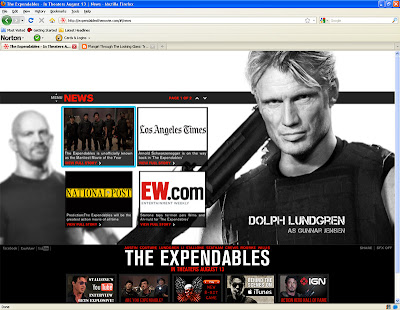 Anyway, The Expendables opens in North America on 13 August, and in South Africa a month later on 17 September. For those who don't know anything about it, the film is pretty much the ultimate action movie. The Expendables is written by, directed by and stars Sylvester Stallone, who has filled his cast with some of the greatest ass-kicking action stars (both A and B-grade) from the 1980s onwards: Jason Statham, Jet Li, Dolph Lundgren, Terry Crews, Randy Couture and Mickey Rourke. Bruce Willis and Arnold Schwarzenegger even make cameo appearances in this tale of a band of cynical mercenaries who decide to finally take a moral stand during an increasingly dangerous mission to overthrow a ruthless South American dictator. David Zayas, Eric Roberts, Steve Austin and Gary Daniels provide the villainy.

MJenks said…
The only thing it's missing is a cameo by Chuck Norris.

joven said…
beautiful blog..pls visit mine and be a follower.. thanks and God bless..

Pfangirl said…
MJenks, out of interest initially there were attempts to get Wesley Snipes, Jean Claude Van Damme and Steven Seagal all in the film as well. As for Blogger word verification, it definitely has a sense of humour;)
9:23 AM