There's really not much to explain about this new Girlz 'N' Games comic. It's really just a little piece of connect-the-dots nonsense that I hope lovers of action sci-fi movies will appreciate. Mostly the strip was inspired by my recent viewing of Predators (my review here) where Alice Braga's female character - the lone woman in the film - is possibly the worst sniper in cinematic history. Not only does she never adopt a sniper's remote, silent-but-deadly approach to combat, but sometimes I had to wonder if she even knew how to hold her rifle. And this is a character who is supposed to run CIA black ops missions and be a top Israeli Defense Forces operative?

Isabelle is a far cry from Private Vasquez (Jenette Goldstein) in 1986's Aliens, who is arguably the toughest, most badass character in the entire Alien franchise. Vasquez can also be viewed as the spiritual predecessor of the much softer, but much more rebellious, pilot Trudy Chacon (Michelle Rodriguez) in Avatar. Of course, both Aliens and Avatar were written and directed by James Cameron, an apparent lover of cinematic warrior women.

For the record, I'm really happy with how the movie characters came out in the new comic. The drawings actually look like the actresses, and that was accomplished without hours of sketching, erasing and re-sketching, as can often be required.

As a little trivia side-note: Alice Braga in Predators, despite playing an Israeli (presumably), is actually Brazilian - which is not typically accepted as Latino. The actress playing Vasquez meanwhile, Jenette Goldstein, is a Jewish American in reality... which leaves Michelle Rodriguez as the only actress of authentic Latino heritage (Dominican Republic, Puerto Rica) playing an authentic Latino action heroine. And now you know! Ah, Hollywood, where any ethnicity is as good, and interchangeable, as the next. 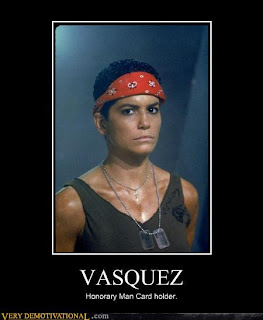 MJenks said…
This is very well done. And you did a good job making the drawn characters look like the real characters!
3:06 PM

Pfangirl said…
Thanks for commenting, MJenks:) The comics take the most time and effort of anything I put up on the web, so it's always great to hear some positive feedback instead of silence from the abyss.
8:57 PM