- December 23, 2009
It’s been 12 years since director James Cameron wowed the world with Titanic, the most successful film of all time, as well as only 1 of 3 movies to ever win a jaw-dropping 11 Academy Awards (the others being Ben-Hur and The Lord of the Rings: The Return of the King). Now Cameron is back and captivating audiences once more with an epic sci-fi fantasy adventure that is assured of (flawed) classic status.

Avatar is set in 2154 and centres on the alien moon of Pandora, where profit-hungry humans have initiated a military-backed mining operation to seize the planet’s rare mineral resources. The problem though is that Pandora is an exceptionally hostile world, and its native population, the Na’vi – giant, blue-skinned warriors and nature worshippers – are highly distrustful of the “Sky People.”

Dr. Grace Augustine (Sigourney Weaver) and her team of scientists have had some success interacting with the Na’vi through the control of genetically engineered, hybrid Na’vi-human bodies (Avatars), but true progress is only achieved when crippled Marine Jake Sully (Sam Worthington) is recruited to replace his dead twin brother as an Avatar operator. While Grace tends to view her work as a diplomatic and anthropological experiment, Jake embraces the adventure his new body provides and soon finds himself accepted by a Na’vi clan. Fierce but spiritually-attuned Neytiri (Zoë Saldaña) is charged with educating Jake in the ways of the Na’vi culture, which he soon comes to love. But this puts Jake in direct opposition to his former ally, head of human security Colonel Miles Quaritch (Stephen Lang), who is intent on destroying the local population.

I’ll say upfront that Avatar is certainly not the Best Film of the Year. Its storyline is way too clichéd and predictable for that. However, Avatar is certain to dominate all the technical categories this awards season. Sorry Watchmen! From the instant Jake Sully comes out of cryo-sleep and wheels himself down onto the surface of Pandora, the audience is filled with a sense of wonder that can only be compared to the first time watching Jurassic Park or The Fellowship of the Ring.

What separates Avatar from so many of today’s special effects bonanzas is its immersiveness. At no point is the viewer encouraged to step back from the film experience, disengage their emotions and coolly appreciate the CGI-wizardry that has made this world possible. From the get-go you accept what you are seeing as “real,” and intellectual assessment of the visuals goes out the window. George Lucas, please compare Avatar to your overly slick, clearly artificial creations and take notes. 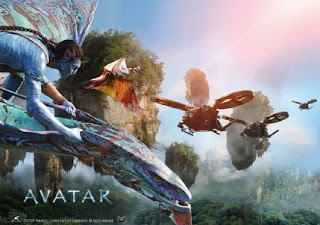 Robert Zemeckis too, given his current obsession with performance capture-based animation, could also learn a lot from the groundbreaking techniques that Cameron uses to realise the Na’vi and Avatars onscreen. The characters are not dead-eyed dolls. They’re credible, emotive creatures that allow the performances of Worthington, Saldana and others to shine through the CGI.

Speaking of performances it’s refreshing to see that Cameron hasn’t abandoned his tradition of including strong female characters in his movies. The filmmaker who previously gave us Sarah Connor, and a much tougher Ellen Ripley, here presents us with the soulful, highly likeable Neytiri, tough human pilot Trudy Chacon (Michelle Rodriguez) – strongly reminiscent of Aliens’ Vasquez – and Weaver’s no-nonsense Grace. In fact, next to Lang’s badass, mech-driving, I-don’t-need-no-breathing-apparatus military commander, Grace was probably my favourite character in the film. Weaver’s presence onscreen is both reassuring and strongly nostalgic – whether she’s in human form or striding around in her lanky Avatar and explorer gear like a big blue Dian Fossey. 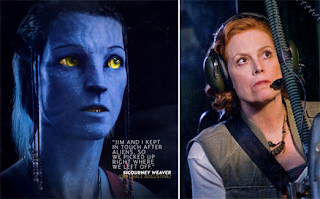 It’s a real pity then that as enjoyable as Avatar is, it’s also a sci-fi adventure that lacks thematic depth. As masterfully as Cameron paces the film’s 2 hours and 40 minute running time – the audience truly doesn’t feels it at all – and as rousing as the final battle is, Avatar never emerges as anything more than a spectacular-looking popcorn flick. It has nothing to say. Or, rather, it has nothing new to say about the relationship between man, nature and spirituality. As usual, the “primitive” indigenous peoples are noble beings who have seen the Truth about life, and lead admirable existences. Meanwhile anyone in a business suit and army camo is a greedy, destructive sleaze never to be trusted.

This kind of simplification is fine for an entertaining action blockbuster, but it does mean that Avatar cannot be considered as anything more than “Great”; certainly not “Outstanding.” 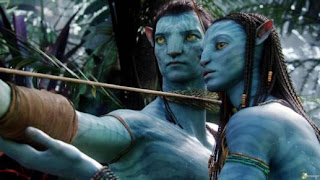 Sidenote: For the time being, you can probably consider Avatar to be an unofficial World of WarCraft movie. Fans of the WarCraft games will no doubt recognise Hyjal and the World Tree, Nagrand and Zangarmarsh, all of which appear in Avatar – but under different names of course.

It’s my hope that the WOW filmmakers watch James Cameron’s movie and adopt a similar creative style. I personally think advanced performance capture would be the perfect way to realise the more unusual-looking, abnormally-sized fantasy races like the Tauren, goblins and Draenei. 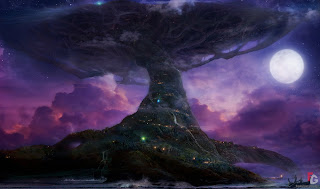 Niel de la Rouviere said…
Did you watch it in 3D? 'Cause I have to say, that I've not had such an immersive movie going experience ever. It was, like you said, totally believable, but the epic way Cameron told the cliched storyline makes me want to excuse the cliches.

Also, the depth of Avatar is just crazy. The language of the natives was created specifically for the movie. You can actually go and learn it: similiar to Elfish and Klingon.

I don't wanna sound a like fanboy, but Avatar will certainly make me a future jaded movie goer, for I doubt that anything will top that movie experience for quite a while. Note, not in terms of film per say, but as a cinema experience.
11:05 PM

Pfangirl said…
Hey Niel, I saw the film on IMAX, although I'm seriously considering rewatching it in 3D to see what that experience is all about.

For me Avatar definitely had its problems but I think one day it will be considered alongside Star Wars and The Lord of The Rings in terms of how it captured people's imaginations. I think there are a lot of 10 year old boys and girls out there who have just been instantly converted to geekdom because of this film.

You're absolutely right about making the distinction between the film and the cinema experience it provides.
9:12 AM