I know I shouldn't really be encouraging anyone to watch cinematic trash, because the more money juvenile, junk movies make, the more frequently these films are greenlit at the expense of quality big screen entertainment. This said, I have to admit that the trailer for Twilight spoof Vampires Suck tickled my funny bone. So, even if you don't pay to watch the film at the cinema (and by the sounds of things, that's advisable!), it's worth downloading the trailer above for a guilty pleasure giggle or two. The same goes for the film's slightly different international trailer. 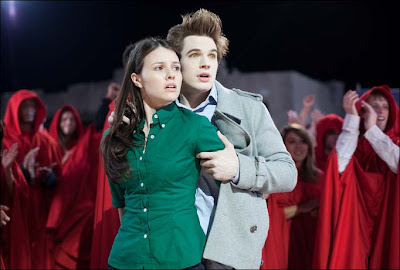 Brought to you by Jason Friedberg and Aaron Seltzer, the same writing-producing-and-directing team responsible for the fairly amusing Date Movie, as well as the rock-bottom Epic Movie, Meet the Spartans and Disaster Movie, Vampires Suck closely parodies the first two Twilight films - while occasionally ripping on other current pop culture obsessions. The film follows teenager Becca Crane (Jenn Proske) as she moves to the small town of Sporks to live with her irritating father. In the process she meets vampire Edward Sullen (Matt Lanter), develops feelings for cheerful werewolf Jacob White (Christopher N. Riggi), and has to choose between them when events come to a head at the Sporks High School prom.

I'm not delusional enough to think that the best moments in Vampires Suck haven't already been revealed in the trailer, but damn that Black Eyed Peas moment is funny. Plus, in terms of casting and performances, the filmmakers seem to have got the impersonations spot-on, and I'm curious to see more. Jenn Proske, in particular, has apparently nailed Kristen Stewart's quirks as Bella. 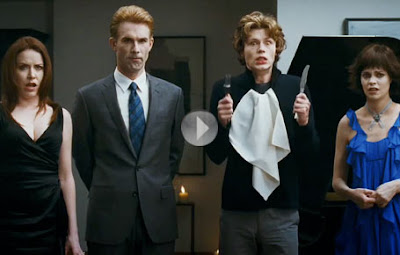 Having opened in the United States already on 18 August, Vampires Suck has a horrific 6% Fresh rating at review aggregator site, Rotten Tomatoes. As a slight positive though, this score makes Vampires Suck the most highly rated film that Friedberg and Seltzer have ever made. Then again, every time I'm tempted to catch this one, I remember my own assessment that the original Twilight films are amusingly cheesy enough without needing the parody treatment. The Twilight franchise comes with its own case of delicious badness.