- August 30, 2010
I haven't done one of these compilation review posts in a while - and considering I'm wrestling with a serious sleep deprivation headache after a physically and emotionally exhausting past week - short, sweet and to the point seems to be the way to go. So, in no particular order, here are a few mini-commentaries on recent movies I've watched.

For the record, while I've been largely dissatisfied lately with new cinema releases, I seem to have had much better luck with the movies I've made the effort to watch on pay-TV.

The Wrestler - Only two years late but I finally caught the highly acclaimed Darren Aronofsky sports drama that should, frankly, have won Mickey Rourke an Oscar. In one of the greatest career comeback performances of recent years, Rourke is superb as washed up, but likeable pro-wrestler, Randy "the Ram" Robinson - who is struggling with a heart condition after years of steroid use and punishment inside the ring. It's rare for a film to be both testosterone-filled and touching, but The Wrestler easily accomplishes this difficult balancing act. Plus, you'll finish watching the film with a whole new, unexpected respect for professional wrestling. Must see if you've never watched it. P.S. Marisa Tomei is tres sexy in the film.

I Love You, Man - Ignore the silly, slacker title. I Love You, Man is a surprisingly enjoyable romantic comedy... with a difference. The film is a sexually frank "bromance," centering on newly engaged Peter (Paul Rudd), who is struggling to find a best man given that he's always had stronger friendships with girls than guys. Enter free-spirited Sydney (Jason Segel), who challenges Peter to embrace his masculine identity. Although events play out predictably enough, the gender swapping adds enough freshness to make I Love You, Man worth watching - particularly if you're in the market for something amusing and undemanding. Rudd has never been more likeable, or believable, and he has great chemistry with Segel.

Trick 'r Treat - In an age where it seems like most American horror films are Saw-style torture porn, or tedious adaptations of Korean and Japanese flicks with creepy, long-haired little girls, this little known, little seen horror-comedy stands out. Feeling something like a cross between Tales from the Crypt, Goosebumps and those old EC horror comics, Trick 'r Treat consists of at least five interlinking stories set in a small town on Halloween. Each of the pitch-black tales comes with a delicious, often unpredictable twist. Trick 'r Treat has a refreshing old school, 80s approach to horror, where CGI is eschewed in favour of make-up and prosthetics, and the film happily mixes humour, gore and chills in equal parts. Highly recommended.

The Young Victoria - The winner for Best Costume Design at this year's Oscars, The Young Victoria is a treat for lovers of historical romance and the British royals. The film looks at the early years of Queen Victoria's (Emily Blunt) reign, especially her romance with Prince Albert (Rupert Friend) at a time when she was struggling to establish her credibility as a monarch. The Young Victoria's strong cast includes Miranda Richardson, Jim Broadbent, Paul Bettany and Mark Strong, although the real strength of the movie lies in the tenderness and realism of the relationship depicted - based on identifiable, contemporary qualities such as mutual respect. The Young Victoria isn't a film that will change the world, but it's sweet and interesting nonetheless. 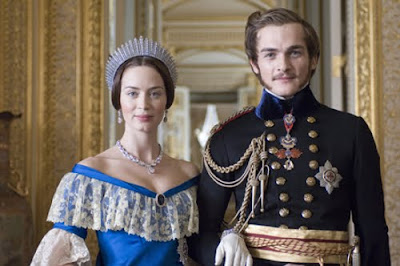 Cleric said…
I Love You Man, was one of the most enjoyable and hilarious movies I've seen in a while! No matter the story, what these two guys do together... man, I laughed my @55 off! :D

Definitely worth watching. It's something both guys and girls will enjoy ;)
11:47 AM

Pfangirl said…
Thanks for commenting, Cleric. It's true, even my mother (in her 50s) loved the movie!
9:21 PM