- August 04, 2010
Don’t get me wrong. Inception is a very good film – well made, well acted, original and thought provoking. It’s just that given the tide of hype that has propelled this sci-fi tinted crime caper into cinemas, I just wasn’t as satisfied as I thought I should be. Although I was never once bored during the film’s two-and-a-half hour running time, I never experienced the sense of exhilaration that comes from deep emotional immersion in an excellent, entertaining film. Instead I felt detached, distracted more by the mind games played by writer-director Christopher (Memento, The Dark Knight) Nolan, than really embracing the onscreen events. 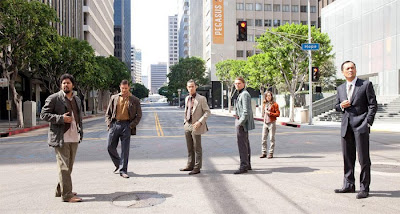 Without giving too much away, Inception is something of a cross between The Italian Job and The Matrix. It’s a globe-trotting heist movie set predominantly in the unstable world of dreams, where characters are continually forced to question what is real, and, by extension, if something isn’t real, is it any less emotionally valid. Cobb (Leonardo DiCaprio) is the best extractor in a dubious business. In an age where information is far more valuable than any physical thing, Cobb and his team steal secrets for powerful corporate clients. They do this by intercepting their target, sedating him and then creating a shared dream world in which they can manipulate the target into revealing the desired information.

It’s a fascinating concept, and Nolan explores it in a way that’s a joy for the thinking moviegoer. For example, by initiating dreams within dreams, it’s possible to penetrate more deeply into a person’s subconscious. Also, the human mind is naturally defensive when it comes to intruders. If a target realises his dream is being controlled by someone else, all the “people” the target has populated the dream with, will violently turn on the extractor – like white blood cells attacking an infection. Such a combination of fury and relentless pursuit is an exciting, (literally) nightmarish concept.

The plot of Inception centres on Cobb’s final, and potentially most challenging, mission. Instead of extracting an idea, he must perform an inception – planting a single, and hopefully behaviour-changing, thought in the mind of Robert Fischer (Cillian Murphy), the heir to a billion dollar business empire.

Inception features a surprisingly youthful cast – the majority of actors are under 35 – and performances are excellent all around. Even though Cobb is pretty much just a calmer version of the character played by DiCaprio in Shutter Island earlier this year, he’s still likeable as he attempts to complete his task while smothering past mistakes. Rounding out Cobb’s team meanwhile, Ellen Page is appropriately wilful and courageous, Tom Hardy provides much of the film’s comic relief and Joseph Gordon-Levitt offers cool stability as Cobb’s reliable back-up man. Marion Cotillard and Ken Watanabe add some exotic international flavour to proceedings and make effective use of their screen time, while acting veterans Michael Caine and Pete Postlethwaite appear in small roles.

One of the major drawcards of Inception, apart from intelligence, is its special effects. Dream worlds are obviously not governed by the same rules as reality: the city of Paris can be folded vertically, penrose stairs and mazes dominate imagined buildings and urban areas, and gravity is not a given. In fact, Inception’s best action sequence is marvellously and dizzyingly inventive – a hallway and hotel room fight unrestrained by normal physics. As with the first Matrix film, Inception’s visuals push the film to exospheric levels of coolness, while viewers struggle to work out how the effects were achieved.

It’s a pity then that this breathtaking sense of wonder could not be sustained throughout the entire film. Given Nolan’s fondness for multi-layered plots that often double back on themselves, Inception was not nearly as twisty and complicated as it could have been. Or what I expected it to be. I may have been over-thinking things but I found myself taking the storyline in interesting directions that were barely touched upon onscreen.

Inception seems lazily content to present a (relatively) straightforward narrative while the audience is left to forage for deeper meaning among the dozens of ideas and cryptic statements thrown about. And as much as I enjoy ambiguity, I receive far more mental gratification from following a trail of meaning and, at the end, either being proven right, or cleverly misled and one-upped by a filmmaker. I suppose in Inception-speak that means I would rather be the Mark than the Architect.

In the end then, despite the undeniable “kick” of its action scenes, and general entertainment value, Inception is not entirely fulfilling. A repeat viewing is required on my part to see if my appreciation improves with further digestion. However, as it currently stands I just can’t rave about Inception the way many others are. It’s a film worthy of 4 out of 5 stars; nothing more. Nolan’s earlier films, including Memento, Insomnia and The Prestige, all hit the mental sweet spot far more consistently.

Cleric said…
Can't wait to see it. And I'm surprised that I haven't seen Shutter Island yet! :-o
3:10 PM

Brandon said…
My biggest problem with Inception was that it lacked character development. Even Cobb's arc was minimal, but those of his team were nonexistant. Did any of his team members (except for perhaps Ellen Page) have any personality whatsoever? I agree, too, that the mindfuck aspect was far less than I was expecting going in, and the film's concept could have been expanded upon. But, at least it is a stellar concept and it was executed well. That said, I think it would have been better as a book, and I think running time limitations hurt it from both the character development and the mindfuck/concept development angle.
4:17 AM

Pfangirl said…
Cleric, definitely go and see both... especially since Shutter Island is more of a mindfuck.

Brandon, I agree completely about the lack of personality. I kept expecting one of the support characters to be a traitor or something but everyone seemed to be content with trusting unstable Cobb. Also, I think the story would be interesting in a book format. And my sister raised the interesting point of wanting to know more about the people who train the businessmen to protect their subconscious. That's an interesting, unexplored concept in the film.
9:08 AM

Although I agree that the "mindfuck" factor was a bit too easy to catch than it was with The Matrix, but I could see where they got their inspiration from :)

I was also expecting someone to betray Cobb, but then again there was a time limit, sadly. For what it's worth, the movie was imaginative, not unique as I would have hoped, but still visually impressive, and a movie that made you think, which is good :)

I recommend it, but start with an open mind with neutral expectations for the best experience imo.