Step Up for new movies opening in South Africa today

- August 13, 2010
Six new films open in South Africa today, although unfortunately none of them are really my "thing" so I'll likely be steering clear of the cinema this weekend.

Anyway, first up is acclaimed, festival-touring Bollywood satire Peepli Live (75% Fresh on Rotten Tomatoes), about bankrupt rural farmers enticed to commit suicide for financial reasons, and the media and political frenzy that their actions produce.

Second up is Please Give (88% Fresh), a independent comedy-drama starring Catherine Keener, Oliver Platt and Amanda Peet. The film centres on a wealthy New York furniture dealer conflicted about her comfortable life and exploitative business practices when there's so much poverty and homelessness around her.

For those in the market for brainless action and hand-to-hand combat, there's The King of Fighters based on the popular video game series. Sean Faris, Maggie Q, Will Yun Lee and Ray Park star in this tale of rival fighting clans who have to defeat increasingly tougher foes as they're whisked into alternate dimensions by a mysterious, evil force. The King of Fighters only releases in North America at the end of the year, so the film hasn't yet been widely reviewed. Like other fighter-game-to-film adaptations, however, I expect it to be Z-grade crap. 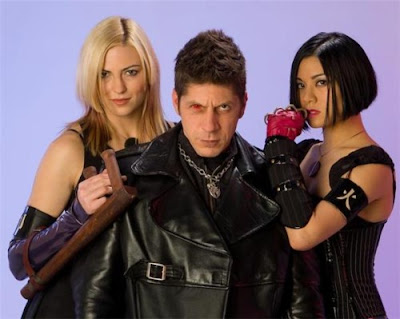 If you're a film lover with "local is lekker" tastes, then there are two South African movies to choose from this weekend. Shirley Adams is a harrowing drama about a middle-aged woman (Denise Newman) who is pushed to emotional, and financial, breaking point when her son is paralysed during a shooting and she's forced to give up her life to care for him. The film, a first from writer-director Oliver Hermanus, won three awards at the recent Durban International Film Festival - including Best South African Film, Best Actress and Best First Feature Film. A bit more lighthearted meanwhile is Afrikaans comedy-drama Die Ongelooflike Avonture van Hanna Hoekom, based on the coming-of-age novel by Marita van der Vyver. Just like the book, the film centres on inquisitive young girl, Hanna, who finds herself stranded during the Winter holidays with her eccentric, highly dysfunctional family in a remote mountain retreat.

Finally there's the most high profile release of the weekend - urban dance drama and sequel Step Up 3, or, more correctly, Step Up 3D. Featuring some characters (and actors) returning from the first and second Step Up films, the high energy Step Up 3D centres on the ultimate dance battle involving the best crews from New York's street dancing underground. The gimmick this time of course is that the mind-blowing moves are captured in 3D. For the record, Step Up 3 was specifically made as a showcase for the multi-dimension medium, as opposed to being a cheap, rushed conversion of a conventional 2D film.

Anyway, the Step Up series appeals to a certain type of filmgoer - the type of person who is already addicted to youth-centric TV talent shows like So You Think You Can Dance. These people will be watching Step Up 3 regardless of what critics have to say. In turn, if you aren't already a fan of urban dance movies, changes are that Step Up 3 won't convert you... or even entice you into the cinema. For the record, the film is a decent 49% Fresh on Rotten Tomatoes. Although clearly dividing critics, some reviewers are praising the film for its stunning visuals and innovative choreography, while others are lamenting the blandness of the cast, amateur acting and over-reliance on tired formula. Still though, the film is the most widely screening of those movies debuting this weekend, and it's sure to be a hit with local audiences.

Cleric said…
Woot! Can't wait for Step Up 3D! When I saw those hands in my face in 3D and the water splashing everywhere, I got chills :)
9:32 AM

Pfangirl said…
Hey Cleric, let me know what you thought of it if and when you watch the film.
10:45 AM