Girlz 'N' Games #59: Have yourself a sparkly Christmas! 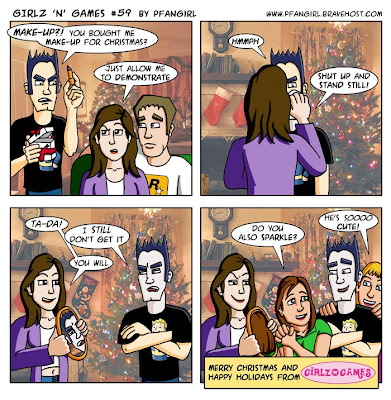 Right, so here it is: the special Christmas 2009 Girlz 'N' Games comic. Really it's the sister strip to #58, seeing as they both are Twilight themed.

I decided for once to give the character of Dorian - a confirmed bachelor - a joyous Christmas, especially after the debacle of last year's festive celebrations, when his supposedly cunning gift idea backfired royally.

Dorian's happy ending this year did of course mean slapping on a thick layer of base and lipstick, but I guess the end justifies the means. Who would have ever thought that pasty wimpiness would be considered sexy? And I apologise right now to all the guys out there for posting the following image... Turn away, quickly! If this doesn't suit you, you can also follow me on Twitter - I tend to tweet when a comic is in production, as well as provide a heads up when it's about to debut online.
Books and comics Film Fun