- March 18, 2009
The Goon is a lesser known comic property, an Eisner Award winning series from creator-writer-artist Eric Powell. I've written a bit about The Goon before, here and here, but for those of you who don't know, the series can probably best be described as a cross between Hellboy, Sin City and noir-ish pulp fiction in general.

Set in a rundown Depression era city, The Goon focuses on a brutish mob enforcer (known as the Goon), his diminutive buddy Franky, and their oddball collection of friends (including a werewolf called Merle), as they battle an assortment of zombies, mad scientists, monsters, aliens and, of course, other gangsters who all want a piece of the Goon's highly profitable turf. Like Hellboy, the Goon isn't one for lengthy discussions - he prefers to settle matters with his enormous fists. 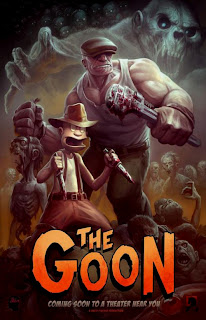 The Goon, from Dark Horse Comics, is a highly enjoyable read, especially if you're a comic fan sick of overpowered heroes in tights and capes, and looking for an action-packed alternative. A twisted sense of humour and a non-aversion to graphic violence is also a must for wannabe readers.

Anyway, Hollywood is still gaga for comic properties at the moment - even the obscure ones - so it's little surprise then that a Goon movie has been in development for a while now. Fight Club, Se7en and The Curious Case of Benjamin Button director David Fincher acquired the movie rights last year apparently.

At the time it was also announced that, curiously, The Goon would be a CGI-animated film, with Fincher producing, and the comic's creator, Eric Powell responsible for the script.

It didn't take long for the first Goon teaser poster to be unveiled at the 2008 San Diego Comic Con last September. You can see that poster near the top of this blog entry. And sure it's a great poster, but having been done in the same style as the comic and looking just like an overblown trade paperback cover, it didn't give any indication of what the film's animation would look like.

And this, of course, is what fans of the comic (well, myself at least) were most concerned about. Especially since, at the time, I didn't think that a live-action Goon film was an impossibility, given how successfully Robert Rodriguez and Frank Miller handled Marv's storyline in the Sin City film.

As it turns out, apparently I didn't need to worry. Last week the first few stills from the Goon movie were unveiled online at Ain't It Cool News, and they look super sweet - although we've yet to see how convincingly the characters move, Powell's beautiful 2-D pencils and inks seem to have been perfectly translated to a computer-generated 3-D format. Ah, fan bliss!

The Goon is apparently due for release in either 2010 or, more likely, 2011, so unfortunately it's still quite a wait for this film.
Books and comics Film

Anonymous said…
hmm, believe it or not, I've never come across the Goon before. Looks like a pretty entertaining read. Am surprised to hear it got picked up for a movie release though. Wonder if it'll go straight to DVD?

Stills are looking pretty awesome though! :)
9:40 AM

Pfangirl said…
Craig, I think the series is popular enough overseas to warrant a cinema release. I hope it doesn't go straight to DVD; I'm looking forward to it. I suggest checking out the Goon trade paperbacks although the first few aren't that great - it takes a few issues for Powell to hit his creative stride.

Mary Christine, thanks for taking the time to comment :)
9:01 AM