22 minutes, 22 seconds: The Lord of the Rings - The Return of the King

- March 19, 2009
Right, so as part of the 22 minutes, 22 seconds screenshot series, we’ve finally reached The Return of the King, the concluding installment in the Lord of the Rings film trilogy.

What’s surprising is that at this specific point into the film, yet again, for the third time in a row, hobbits are proving to be surprisingly resistant to evil influence. And they are very, very lucky. To see what I mean, don’t forget to check out The Fellowship of the Ring and The Two Towers’ 22 minutes, 22 seconds screencaps here and here.

Anyway, this scene follows on directly after the one in which an overly curious Pippin Took gets his hands on a palantir, a scrying orb that allows for long distance communication between fellow palantir users (think of it as a fantasy world equivalent of a telephone). Unfortunately for Pippin, but fortunately for our heroes as a whole, this palantir links the mind of its user with that of super deluxe evil overlord Sauron, who is still manifesting himself as a giant flaming eye over the dark kingdom of Mordor.

While this mind-link experience is horrific for Pippin, somehow he is able to resist Sauron’s probing for valuable information. And at the same time he receives glimpses of the Dark Lord’s plans for world domination. 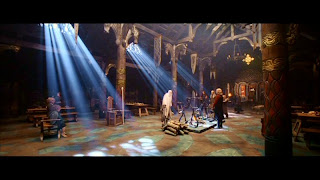 Gandalf: There was no lie in Pippin’s eyes. 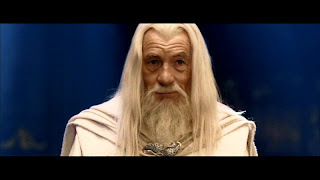 Gandalf: A fool, but an honest fool he remains. 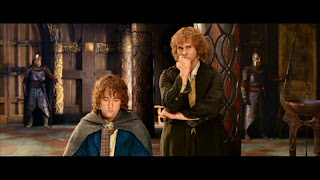 Gandalf: He told Sauron nothing of Frodo and the Ring. 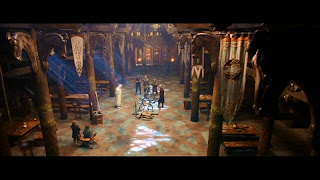 And so kicks off one of those scenes that, if this was a Dungeons & Dragons session, normally puts me to sleep. There’s lots of planning and debating and individual quest-giving as Gandalf reveals Sauron’s next target for destruction is the human city of Minas Tirith.

I also just had to grab this screenshot below from the same scene due to its distinct feeling of “D&D”ness. Just look at all the different character classes all nicely lined up for action. Pity the party is a bit of a sausage fest (if you’re counting Legolas as male(!)), but that’s Tolkien for you. 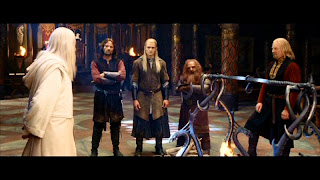 The big fantasy battle scenes are still so groundbreaking and jaw-dropping that everything Hollywood has attempted since has paled in comparison. However, on the downside there’s a lot to scoff about in The Return of the King, there’s a surprising amount of singing (admittedly true to Tolkien’s books), just when you think you’ve reached the end there are several more endings to sit through, and this time, unfortunately, the hefty deviations from the novel did grate me.

I’ll always be sore about Saruman’s lame fate in the theatrical cut of the film. For the record, I haven’t seen the extended edition of The Return of the King, or any of the Trilogy for that matter. I’ve always wanted to, but I think I need to go into some kind of intensive training before I can attempt to tackle the even longer running times.

Anyway, coming up next as part of the 22 minutes, 22 seconds series, we’ll be dipping into some other classic movie trilogies, and perhaps some beloved 80's hits as well.
Books and comics Film

MJenks said…
I own all of the extended versions. Return of the King was always my favorite (though my favorite book was Fellowship of the Ring) movie. The siege of Minas Tirith was fabulous.

True, the fate of Saruman was grating, but, like Watchmen, something had to be cut and unfortunately, it was Saruman. Luckily this freed up Christopher Lee to play Count Dooku who is...the...exact same...character...and whose fate was as equally unpalatable.
3:27 PM

Pfangirl said…
Bah, Count Dooku - the silly name alone just ruined the character for me. Lee was much cooler and much more menacing as Saruman.

I don't think any fantasy battle has yet topped the war for Minas Tirith. Similar scenes from other fantasy films always come across as pale, derivative creations when they're compared to it. Eragon is a case in point.

I will make an exception though for the Narnia films because of the way they mixed mythological and magical beasties into battles, making the scenes more colourful and visually exciting.
9:13 AM