- March 02, 2009
After a frustrating day of work on Friday, compounded by having to complete a dull but urgent task, and being tortured with only intermittent Internet access, it was a relief to finally get out the office, enjoy a delicious meal of creamy spinach and chicken pasta at Musgrave’s Circus Circus, and then head off to the Elizabeth Sneddon theatre at the University to watch Pieter-Dirk Uys’s latest touring one-man show, Elections & Erections.

It was actually my third time seeing this legendary local satirist in the flesh, and once again it was a highly entertaining, thought-provoking evening.

The first half of the show sees Uys talking about his life-changing experiences in Apartheid South Africa, stressing the importance of the coming April elections, and impersonating a host of famous figures including Hillary and Bill Clinton, PW Botha and Thabo Mbeki. A couple of Uys’ less famous, but reoccurring characters pop up as well, including hypocritical kugel Nowell Fine and a coloured Muslim woman who runs a furniture store in the Cape Flats. 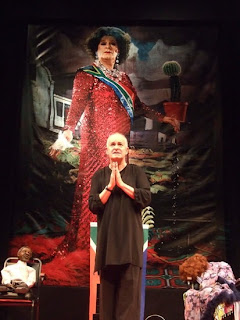 This first half of the show was amusing, and in parts touching, but the show reaches a whole new level of hilarity after intermission, when Evita Bezuidenhout herself comes out on stage to interact with the audience and interview a prominent local figure on stage. Now apparently earlier in the show’s Durban run, hated city municipal dictator… er… manager, Mike Sutcliffe was there. On Friday night, however, the interview portion of the show seemed to be a scripted satire. Another white male comedian came out onto the stage in drag to play a powerful black businesswoman, and he was utterly amazing in his impersonation. If you closed your eyes you would have sworn a black woman was on stage.

Elections and Erections moves through to Johannesburg this week and then Cape Town throughout April. If you’re at all interested in or amused by the absurdity of South African politics, you should definitely check it out.

On Saturday Durban was hit by a freakish midday flash flood/thunderstorm. I was on the freeway, on my way back from kids’ Brazilian Jiu-Jitsu class, when the worst of it hit. At one point a wave of water hit my windscreen and I was totally blinded for what felt like 4 seconds. I’m an anxious driver as it is so after that potentially deadly experience I was a bit pale and twitchy for the rest of the day.

I did head off in the late afternoon though to see the Oscar nominated The Curious Case of Benjamin Button. Of course you can expect my full review up here soon but I think I can say upfront that the film will probably have more of an impact on female viewers as they fall in love with Brad Pitt’s character. With a largely episodic format, the 3-hour film does drag in parts, but it gets increasingly touching as it goes along. Plus, the technical wizardry used to pull off the ageing effects is utterly mind blowing.

Sunday was wet and cool, and I tried to keep myself busy with as many assorted little tasks as possible on this loneliest, most hollow-feeling day of the week. So I baked banana bread, wrote my Valkyrie review (see below), started doing some long overdue PC backups and began playing Rise of the Argonauts. An action-RPG in the vein of Jade Empire, Argonauts is probably the gaming equivalent of Frank Miller’s 300. It isn’t obviously as over-the-top as 300, but your hunky Leonidas-lookalike hero even enters slo-mo mode when he unleashes his heavier, graphically violent attacks. I think I’ll switch to playing the game with my gamepad though because the default PC controls require way more dexterity than my fingers are capable of. 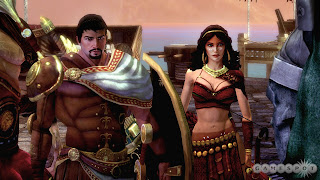 Finally I rounded off the weekend with chick-flick deluxe, Georgia Rule, which stars Jane Fonda, Lindsay Lohan and Felicity Huffman as 3 generations of free-spirited women in the same family. Forced together over one Summer, the women are forced to deal with some painful secrets. Of course, describing the film like this makes it sound pretty awful but the performances are excellent. Despite being deglamorised Jane Fonda energises the screen every time she appears... which isn't nearly enough. There really is no school like the old school.
Film Gaming Out and About Personal