- March 26, 2009
I've written before about director Tim Burton's highly anticipated new take on Alice in Wonderland, which I believe has finished principal photography and is now well into the post-production stage (to add in all the special effects and stop-motion animation).

Anyway, some new images from the film (mostly concept art) recently appeared online, including this one of Alice herself (played by young Aussie actress Mia Wasikowska).

Check out more of these pics here or, for better quality, here. You see the film, from Disney, was recently profiled in the new Disney magazine, D23.

What was revealed was that the film isn't just a bog standard reinterpretation of Lewis Carroll's original story. Rather, much like the video game American McGee's Alice, and in the same vein as cult 80's classic (and one of my childhood faves!) Return to Oz, Tim Burton's Alice in Wonderland will feature a new storyline, and see an older Alice returning to a darker, distorted Wonderland. All the character favourites will be there, including the Cheshire Cat, Mad Hatter, Queen of Hearts and the Caterpillar, but things have definitely changed.

Extracted from Wikipedia:
Tim Burton states that "given what this story is, if Alice had this adventure as a little girl and now she’s going back all these years later, it’s a bit overgrown...[and there’s] a slightly haunted quality to Wonderland, even though it’s got strong elements of color." She is now 17 years old and someone "who doesn't quite fit into Victorian society and structure." This journey "becomes a rite of passage as she discovers her voice and herself."

Alice in Wonderland is due for release in March 2010.

Still speaking of Alice, and in particular, the gothic video game American McGee's Alice, it looks like creator American McGee and EA are actually FINALLY working on a sequel, for release on Xbox, PS3 and PC. You can read the press release, as well as what American McGee himself has to say on the matter.

Count me officially ecstatic! Action-adventure American McGee's Alice is of course one of my favourite ever games, as you may have guessed from the imagery and concept art adorning this blog. However, having been released in 2000, the game looks very jagged and dated today. Frankly I would have been happy if McGee's Spicy Horse game development studio just simply remade the original, but I'll settle for a sequel - even if it doesn't quite make sense.

You see, by the end of the original game, Alice had overcome her personal demons, restoring peace and order to Wonderland. She returned to the fantasy world in the first place when her entire family was killed in a fire, plunging her into a grief-stricken catatonic state. But eventually, by facing her monsters, represented by the likes of the Jabberwocky and Red Queen, she got over it. I'm not entirely sure what event in the real world could trigger another relapse, and send her back down the rabbit hole. The loss of another loved one? 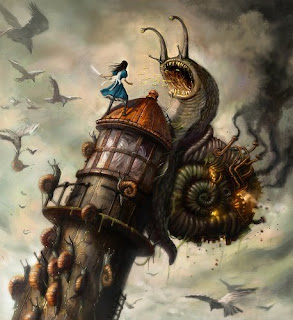 MJenks said…
Oh boy. Let's hope he manages to not eff this one up like he did Willy Wonka.
3:31 PM

Pfangirl said…
Thanks for the comments, guys.

MJenks, I enjoyed Charlie and the Chocolate Factory right up until the end when suddenly the plot veered off in an inexplicable "blah blah father son" direction that killed any chance of The Great Glass Elevator ever happening.

Seeing as Alice in Wonderland isn't actually following the novel (apparently), I think Burton has more area to move without pissing people off.
10:01 AM