I haven’t made a mistake with the title. That’s the full name for the new documentary-style satire from Sacha Baron Cohen. Most people will know Cohen as his Ali G persona, but here he plays his other famous character (my favourite) - bigoted, sexist and wonderfully naive Kazakhstan journalist, Borat Sagdiyev, as he tours the United States.

The film was a smash hit at the Toronto Film Festival a few months or so back. And this trailer is absolutely hilarious - the funniest trailer of the year. Borat opens in South Africa on 17 November 2006. And I'll be there opening night! 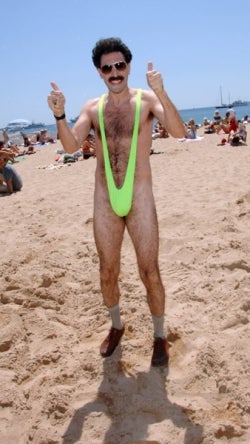 Dante said…
Wasn't a big fan of borat in the beginning but he does grows on you. Movie looks fun.
10:27 AM