After 3-6 months of exposure to the banner ads for free online game, Evony, I could no longer resist drawing an Evony-themed Girlz 'N' Games comic.

So what's the issue, you say? Well, Evony is worth a bit of commentary because of its online advertising... it's highly misleading advertising.

You see, Evony is a strategic civilisation sim in the mold of Civilization and Age of Empires. You start with a medieval town, and assorted basic resources, and over time try to develop your settlement into a mighty economic and military power, while all the while defending against attacks from other players. It all sounds simple, straightforward and pretty damn derivative if you've ever played a similar turn-based or real-time strategy game before. Over time Evony's online advertising has become increasingly sexually explicit, and irrelevant to the game - as this blog entry makes resoundingly, and amusingly, clear. Underwear, titties and pseudo-porn! Come on, guys, don't tell me that's all that's needed to sell you something? 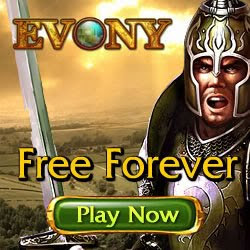 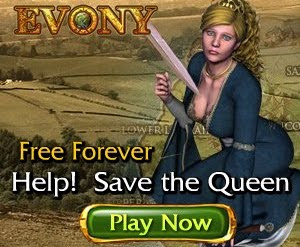 You could argue that Evony's advertising campaign has garnered a lot of attention for the game, as well as click-throughs to the site. But surely generating all this excitement is a waste of time when the potential player gets to the site and realises they've been duped? Arousal turns to annoyance, and a hefty chunk of bad feeling develops towards the game, which in turn translates into mockery and much non-playing. So congratulations Evony on your Epic Fail!

As usual, if you like my latest Girlz 'N' Games comic, please forward it on to your like-minded friends. You can also show your support by joining the Girlz 'N' Games Facebook group, which is open to all. The big advantage of joining is that you'll immediately receive an email notification every time a new comic is uploaded.

If this doesn't suit you, you can also follow me on Twitter - I tend to tweet when a comic is in production, as well as provide a heads up when it's about to debut online.
Books and comics Fun Gaming

MJenks said…
Actually, I've read that Evony was developed by one of those Chinese gold farmers from WoW and other MMORPGs. That's why, in order to do anything in the game, you have to buy stuff. Oh, yeah, it's "free", but then you have to buy accessories in order to up your production and farms and building queue. Oh, and to chat. What? Yeah, you get like twenty free chats, and then it's time to pay up.

Worse, apparently, since it runs in your browser, the Chinese goons have it set up to start digging through your hard drive once it's up and running. Nice, huh?

I played it for a while, because I like turn-based strategy games. Than I started reading about it and then I got hammered by a couple of stupid in-game rules that allow someone 100 x stronger than you to magically poof their village next to yours and start taking everything.

There's another game that they've made called Napoleonic Wars or something (I got invited to the Beta) that is the exact same thing. I don't think they bothered to change the pictures much or anything. So, to that end, expect to see similar advertising campaigns for that any day now.

Pfangirl said…
Wow, thanks MJenks. Nice to hear commentary from someone who has actually played the game. Apparently many of those so-called "free games" basically force you to pay for game-improving content, lest you be at a major disadvantage, which is such a con.

Really, forgetting the cheesy ads, the whole situation sounds really crappy and exploitative. I'll be sticking to WOW thanks, which at least us run with utmost professionalism by Blizzard.

Tim said…
So the guy next to me at work plays Evony while the rest of us play WoW during our lunch-hour - I'd ask him what got him playing it, but I'm not sure I'd get an honest answer; I don't know him that well.
6:22 PM

Pfangirl said…
Well, Tim, whether or not you know him that well I think we can assume that your colleague is definitely a breast-man as opposed to an ass-man ;)
1:26 PM