- October 29, 2009
Seeing as it's something of an unofficial Vampire Week on my blog in the lead up to Halloween, I thought you might be interested in this short Wall Street Journal interview with author Anne Rice. 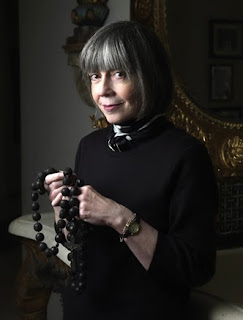 Rice, of course, is the grande dame of 20th Century vampire fiction, injecting the genre with gothic opulence and gender bending eroticism long before Stephenie Meyer had Bella hanging out at the Cullens' mansion and making goo-goo eyes at Edward. The most famous of Rice's Vampire Chronicles is the first book in the series, Interview with the Vampire, which in turn was adapted into one of my favourite ever vampire movies, starring Brad Pitt, Tom Cruise, Kirsten Dunst, Antonio Banderas and Christian Slater.

I must confess that although I loved her earlier work (I gave up on the series after The Tale of the Body Thief) I always thought Anne Rice was a bit of a loon. This seemed confirmed when she converted back to Christianity and Roman Catholicism in 1998, vowing to forever turn her back on writing dark and despair-filled vampire fiction in favour of Christ-centric literature that "honors Him as Our Maker and as Our Savior."

The interview linked to above shattered my conceptions! For one thing, Rice scores points for admitting that she's a big fan of TV series True Blood. For another thing she's a remarkable erudite and perceptive woman. Take, for example, her comments about the current Twilight phenomenon.

Have you read any of Stephenie Meyer’s books?

No, I haven’t read any of the Twilight series, but I did see the film. I felt that it reflected the deep desire of young women to have the mystery and protection and wisdom of older men. I think many girls mature much earlier than boys, and they are frustrated when they approach young boys for love or protection. Hence the fantasy of a wise and protective vampire coming into the life of a young girl who, of course, appreciates him in a special way.

So check out the very interesting and enlightening interview.
Books and comics Film Television