You Rock! and other weekend pop culture

- October 19, 2009
In terms of pop culture consumption these past few days, it was Gaming that dominated over Film Watching and Reading. This said, I did finish The Savage Tales of Solomon Kane by Robert E. Howard this weekend. However, I enjoyed this collection of short stories, poems and unfinished fragments so much I think it deserves a full review (i.e. its own blog post) later this week.

Anyway, in terms of Film Watching this past week I was disappointed by 2 films I had always been intrigued about, and finally ended up catching on TV. Both were visual treats but something just felt "off" about them.

The Fountain, from Requiem For a Dream's Darren Aronofsky, is a trippy fantasy/sci-fi flick meets love story. In 3 related story arcs - involving an conquistador adventuring in South America, a contemporary medical researcher and a hairless Tai Chi-practicing astronaut who floats in a bubble - a man (Hugh Jackman) struggles to save his dying love (Rachel Weisz).

Frankly it's weird stuff, to the point that I found the unusual story structure and visuals detracting from the central romance. Despite some excellent acting from Jackman (who proves here that he is completely capable of serious drama as well as breezy blockbusters) I wasn't moved at all. For a supposedly powerful tale about love, loss and immortality, the whole thing just felt muddled. Such a pity for such a pretty movie.

I planned to watch Speed Racer drunk, but it turns out I wasn't nearly tipsy enough to appreciate this high octane family film from the Matrix's Wachowski Brothers. Perhaps I should have been taken hallucinogens instead?

Based on the Japanese animated series which I, admittedly, have zero familiarity with, Speed Racer focuses on a close knit family, and racing team, who compete as underdogs against corrupt corporate racing teams. In terms of plot, I didn't find the movie to be too silly and in its favour the film has a great cast (Emile Hirsch, Christina Ricci, John Goodman, Susan Sarandon, Matthew Fox), even if some of the talent is underused. However, in replicating the look of anime, Speed Racer has a colourful, highly artificial approach to its aesthetics, which takes getting used to. Of course it's intentional, but the racing scenes feel like a kiddie video game or a Hot Wheels commercial. Honestly I didn't have a problem with this though. What I found more annoying was the general stupidity of the characters, and the innumerable scenes devoted to Speed Racer's irritating, chubby, little brother. Argh!

In terms of Gaming, the annual Halloween-esque 2 week Hallow's End festival kicked off yesterday in World of WarCraft. The festival celebrates the day the "good" undead, the Forsaken (of which my warlock is a part), broke free from the Lich King's dominance and regained their free will under the leadership of banshee queen Lady Sylvanas. Achievement junkie that I am, I've been participating in all kinds of quests and challenges - including taking on the Headless Horseman who rises from his grave every year at this time to terrorize Azeroth with a streak of arson attacks. 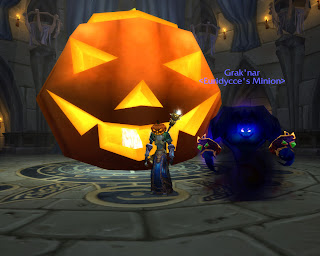 Anyway, WOW playing only happened yesterday. The major gaming experience of the weekend was a 7 hour unbroken stretch of Guitar Hero 5 at a friend's flat on Saturday evening. Now that we have access to all the peripherals (drum set, microphone and 2nd guitar) we made it more of a collaborative band experience, trying to work through the campaign mode, unlocking new tracks, venues, character avatars and outfits along the way. I was on vocals (Medium difficulty), the bf on drums (Medium difficulty) and our friend on guitar (Expert difficulty).

And I'll say that out of the different modes - I didn't try base playing - drums is the closest in the game to the real thing. You need serious, almost intuitive, co-ordination (which quickly ruled me out), as well as a hefty amount of stamina in your arms and pedal foot. I happily returned to my mic and the occasional stint on the guitar for the rest of the evening. 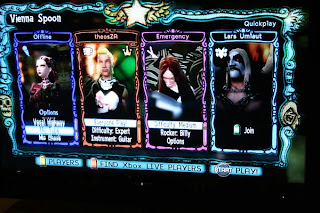 Our band, Vienna Spoon, and its avatar members.

Anyway, the new Guitar Hero features 85 new tracks by 83 different artists, with a wide selection of rock songs that includes classic tracks, current hits and, of course, the usual unknown up and comers (which are a bitch to sing when you've never heard them before!). Some of the memorable tracks we've already performed include the Gorillaz' Feel Good Inc, Billy Idol's Dancing with Myself, Kings of Leon's Sex on Fire, Blur's Song 2, the Rolling Stones' Sympathy for the Devil, Queen's Under Pressure and Bob Dylan's All Along the Watchtower. Along the way, we also unlocked the Shirley Manson (Garbage) and Matthew Bellamy (Muse) characters while playing tracks from those bands. Alas, we haven't yet found Johnny Cash, Carlos Santana or Kurt Cobain.

Oh, and for the record, you can import tracks into the game from any of the other recent Guitar Hero title you own, extending the song choice even further. 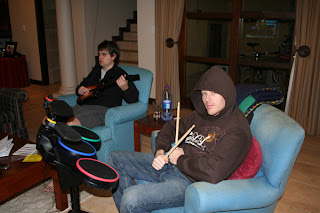 Anyway, the song that we most successfully performed on Saturday night was Duran Duran's Hungry Like the Wolf. It was certainly my best vocal performance of the evening. One of the nicest things about Guitar Hero 5 is that when you are playing with multiple members, you can "carry" struggling band members. If your friend bombs out, you can rescue him, and return him to the game, by performing really well and winning over the crowd. This new gameplay feature means you have a better chance at playing a track to completion. 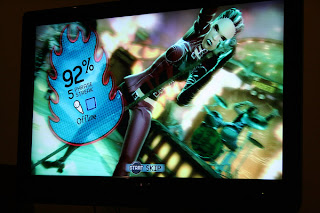 Other notables in Guitar Hero 5 include its multiple new competitive modes. Clearly a great deal of thought has gone into them, allowing players of different competencies to still play against one another without any great advantage or disadvantage.

We didn't try out all the competitive modes, but had a great deal of fun with "Momentum," where players start at Medium difficulty but then find themselves moving up and down in difficulty depending on how successfully they hit the notes. "Do or Die," meanwhile, rewards accuracy, with players who miss 3 notes in a song section "striking out" and being forced to wait until the next section to re-enter the competition and attempt to accumulate points.

We ended the evening well past midnight with sore wrists, stiff limbs, as well as husky voices to rival that of the Cell C lady. Good times! 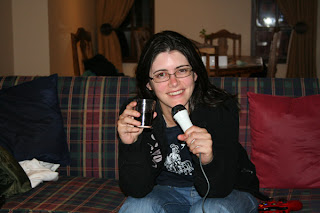 Tara said…
The Fountain is actually one of my favourite Sci-Fis BUT I can completely understand why some people don't completely dig it and, like you, find it muddled.

Sounds like a damn good weekend geek wise though. Colour me jealous.
2:01 PM

Pfangirl said…
Hey Goblin, I love fantasy-infused love stories (things like What Dreams May Come) so I was hoping to be seriously emotionally moved by The Fountain. I just wasn't. I think if they dumped the floating in space stuff and just had the researcher and conquistador storylines I probably would have enjoyed it more.

It was a stunning looking film though, with so many memorable shots. The Tree of Life stuff just blew me away...
12:24 PM