Clash of the Titans: New images

- October 07, 2009
Hard to believe it but it's less than 3 months until the start of 2010. When it comes to next year's film releases, so far only a handful are pulsing persistently on my radar. So far, my must-sees for 2010 include Prince of Persia: The Sands of Time, Alice in Wonderland, Iron Man 2 and, much later in the year, Harry Potter and the Deathly Hallows: Part 1.

There is one final film to add to my 2010 High Anticipated List and, as a total mythology slut, I've already blogged quite extensively about it, here, here and here. And that's Clash of the Titans, a loose remake of the 1981 film of the same name.

If you, like me, are a Child of the 80s, or at least spend a lot of time watching TCM these days, chances are you've seen the original - which has young Perseus, son of Zeus and a mortal, embark on a dangerous quest to stop his love, princess Andromeda, from being sacrificed to the Kraken. This involves consulting with the 3 Stygian Witches, who share a single eye, and decapitating Medusa, the hideous gorgon whose mere glance can turn men to stone. Helping Perseus on his quest are the gods, who provide him with assorted magical equipment. With it, Perseus is able to capture and tame the winged horse Pegasus, who provides an invaluable advantage in completing his mission.

Now, Empire Magazine has just run a cover article (worth a read) on the Clash of the Titans remake, releasing with it several exclusive new images from the film. And, yup, it comes through loud and proud that this Clash of the Titans will be a lot more gritty, dark and combat orientated than the original. Let's conduct a little comparison shall we...

Here we have Harry Hamlin's original Perseus alongside the new Perseus, the apparently always intense Sam Worthington (who impressed in Terminator: Salvation earlier this year, and is also the lead in James Cameron's Avatar, out in December). This time around, Perseus resists his destiny, and only takes up the challenge when his human family is murdered. All this ancient world Charles Bronson wants is revenge, and if that means killing a god, then so be it. 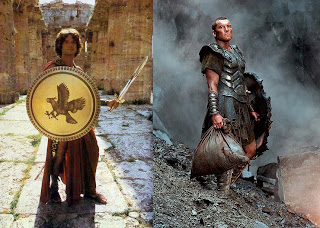 The Stygian Witches have also had a major overhaul, looking now less like something from Shakespeare's Macbeth and more like something out of a Silent Hill video game:

The new Clash of the Titans has a considerably different plot from the original. Instead of rescuing a princess, Perseus is roped into a war between the Olympian gods. Hades (Ralph Fiennes), lord of the underworld, is intent on seizing power from his older brother, and king of the gods, Zeus (Liam Neeson), and should Hades be successful, hell will be unleashed on Earth. Given this emphasis on battle, it's no surprise that the gods in the remake have ditched their togas and laurel leaves for full plate armour. Zeus' gold getup in this behind-the-scenes image makes me think of Gary Oldman's ultra-styled armour in the opening scenes of Bram Stoker's Dracula. Oh, and it's nice to see the little models on the floor by Zeus' feet - they played a major role in the original Clash of the Titans, with the gods quite literally toying with humanity.

Perseus' role in the new Clash of the Titans is to assemble a group of warriors (one of whom looks suspiciously like a supernatural being) and descend into the underworld to defeat Hades. In the process, Perseus and his friends pass through forbidden worlds and face all sorts of demons and fearsome beasts.

For more pics from Clash of the Titans 2010, head here to the Movieweb gallery. Although there is plenty of evidence that Medusa will still be in the film, I've yet to see a single sign of Pegasus. Here's hoping the winged horsie makes it into the film because the little girl inside me would be very disappointed if Pegasus was dumped for something more "badass" to fit with the film's darker tone.

Clash of the Titans is set for release, hopefully worldwide, at the end of March.
Film

MJenks said…
Reading that recap...I just threw up a little in my mouth.

Leave it to Hollywood to take a perfectly good story, like Perseus, and ruin in it utterly.
3:17 PM

MJenks said…
I'm sure Pegasus will be in the movie, even though Pegasus' only role in the story was to spring from Medusa's severed neck.

The original movie was bad enough. This has trainwreck written all over it.
3:19 PM

Pfangirl said…
Yeah, I must say I've never understood the need to fiddle with the original story. It's pretty damn cool as it is... although a proper Jason and the Argonauts adaptation would be even better.

For whatever reason Hollywood has never been quite sure what to do with these stories.

And at least the video games Age of Mythology and Titan Quest could make the distinction between Olympian gods and their Titan forefathers. Hollywood just doesn't grasp that basic concept at all.
7:33 PM

Goblin said…
Man I was pretty bleak when I heard they were remaking this but changing the story up too?

Makes me wonder what they're going to do with the Poltergeist remake - No no guys, we can't hurt little blonde girls anymore, let's rather have the ghosts come and bake cookies.
8:09 AM

MJenks said…
You're right. It's sad when video game writers, who I'm guessing get paid less, are miles better than Hollywood writers.

That also reminds me, I need to add Titan Quest to my Christmas list.
3:44 PM

Anonymous said…
I agree with mjenks, this story is stupid. There are no titans in it and it has nothing to do with Perseus.
4:49 PM

Pfangirl said…
MJenks, curiously though, Titan Quest was actually written by a Hollywood screenwriter, Braveheart and We Were Soldiers' Randall Wallace. Perhaps then it's the studio execs and not the writers who are mutilating myths and legends according to their warped perception of what film audiences want to see.

But yes, Titan Quest is definitely one to add to your gaming list if you like the style of play of things like Diablo II. It was marvelous fun running around slaughtering mythological beasties and meeting everyone from Leonidas (granted, a real world figure) to Orpheus.
12:24 PM

MJenks said…
You're right about the studio execs getting their hands into it. All they want is to make money and don't care about how braindead the product is that they're putting out there. So, I wrongfully pointed the finger at the writers for the movies for being the worst of the offenders, when it's only partially their fault.

Fun fact for you: did you know Perseus' grandmother's name was Eurydice? Not to same Eurydice that was Orpheus' bride (if you can call her that), but it was the same name.

Bringing up Orpheus sparked that little memory in the back of my mind.
3:40 PM

MJenks said…
Actually, anon, there was one Titan in the story of Perseus. Perseus, after killing Medusa and coming around the edge of Africa (then considered the edge of the world), sought shelter from a storm in the lands of Atlas. Atlas, most likely because of Perseus' parentage (Zeus being his father), didn't want Perseus around, so he tried to kill him. Eventually, Perseus showed Atlas what was in that pouch on his hip and turned Atlas into the mountain range that bears his name to this day.

However, you're right. Clash of the Titans could focus on just the story of the war between the Olympians and the Titans, and it would be a pretty awesome movie.
3:45 PM

Pfangirl said…
Whenever Titans feature in "new" stories about mythology today -well, in video games at least - there's normally some villain intent on releasing the older gods from their underworld prison.
3:20 PM