- June 25, 2009
If you’re looking for a fun, light-hearted movie to fill a few hours then stay well away from Blindness, the latest drama from acclaimed filmmaker Fernando Meirelles. With Blindness Meirelles, who was responsible for the multi-award winning City of God and The Constant Gardener, has created a dark, frequently disturbing film about how fear and trauma can strip away man’s compassion towards his fellow man, and just how easily catastrophe can trigger a complete social breakdown. In an age of global terrorism and Swine Flu paranoia, Blindness is a highly relevant, and interesting, film. 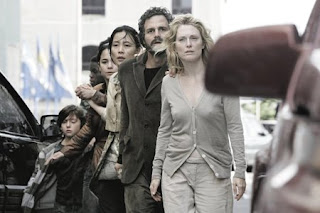 Blindness, based on José Saramago’s novel of the same name, has a fascinating premise. When the inhabitants of an unnamed city are struck by the White Sickness, a mysterious, highly contagious blinding disease, the sufferers are rounded up and quarantined in a rundown institution. Among the first of the inmates are a sightless eye specialist (Mark Ruffalo), and his loving wife (Julianne Moore), who seems inexplicably immune to the disease but refuses to leave her husband's side.

Initially the doctor, his wife and the small group of first infected cope admirably, coming together as a tight family unit to survive. As more and more sufferers are jammed into the institution, however, the facilities degrade, ford shortages become commonplace and, worst of all, the arrival of the self declared King of Ward Three (Gael García Bernal) and his ruffians, triggers a violent power struggle within the institution. 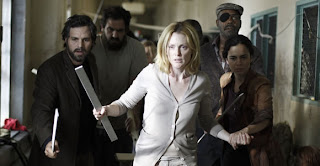 Blindness is a multi-layered film, touching on multiple issues, particularly the effect that helplessness has on the human psyche. There’s depression, passive acceptance, frustration, anger, and cruelty for cruelty’s sake. Feeling weak and emasculated Ruffalo’s doctor loses his sexual attraction to his wife, who he can no longer see as anything but a 24-hour nurse. Moore’s wife meanwhile is increasingly worn down by the strain of caring for so many vulnerable people, literally leading them around the filth-strewn hallways.

Then there are the social issues that the film explores: how the importance of appearance falls away in a sightless world, how people no longer care about their looks, and how easy it is to hurt others when you don’t have to look in their eyes and recognise their humanity. Blindness features one particularly harrowing rape sequence, made even more disturbing by the passivity of the affected women. It’s one of Blindness’ more squirm-inducing scenes, along with a groping, claustrophobic supermarket riot to rival anything in a zombie horror flick. 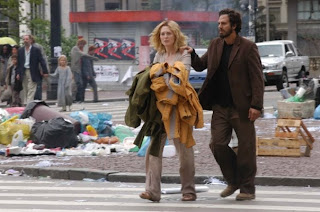 Blindness is cleverly shot and edited, highlighting the confusion of the newly blind and the white haze in which they must now live. Many scenes are overexposed, with the actors looking appropriately worn and washed out by their experience. Blindness is certainly no vanity project for any of the performers involved. Still though, for all the stylish cinematography Meirelles uses, very often it’s the simplest shots that are most memorable and emotionally affecting: An overweight middle aged woman flaked out naked on a bed; a once clean passageway smeared in human excrement and strewn with trash.

Blindness does overstay its welcome by 15 minutes or so, and could have been tauter towards its conclusion. The film could also have done without Danny Glover’s narration that comes and goes inconsistently and adds little to proceedings. Still though, Blindness is thematically ambitious and thought-provoking. Just brace yourself for a pretty bleak cinema experience, that has little positive to say about human nature. 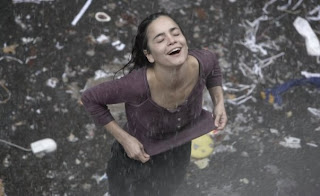 MJenks said…
Wow. This sounds good. I'm going to look for this at some point in the future.

Also, I know it was a typo, but "ford shortages become commonplace" made me giggle, given the state of the US auto market recently.

Oh, and, welcome back. I hope that you get through the changes and challenges you're facing in the near future. We're all pulling for you.
2:56 PM

Pfangirl said…
Lol, that is a hilarious type-o. I kept thinking there was something wrong with that sentence but I just couldn't put my finger on it. Guess my proofing skills are slipping:P

Once again, thanks for the well wishes. Blogging may be a little inconsistent for a while, but I'll do my best to get stuff up.