The hills are alive…

- October 21, 2008
If the Rhine Valley in Germany was picturesque, Austria, with its snow-capped mountains, thick forests and wooden cottages set against a backdrop of green green fields, is absolutely majestic. This is after all the land of the Sound of Music! Again, after the craziness of Oktoberfest, our day in the Austrian Tyrol was a chance to unwind and enjoy the fresh, clean, country air. 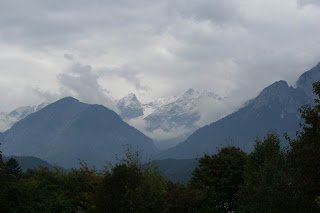 Communication
Communication with locals, who speak a dialect of German, is on a par with Germany, really. You can get by with a few basic phrases. Politeness is important here.

Activities & Attractions
We were in the Austrian countryside so I can’t comment on all the cultural and historical sights of Austria’s capital Vienna. Away from the city though, it turns out that Winter is peak tourist season in Austria. Skiers and other snow sports enthusiasts rush to the region. In fact, the city of Innsbruck (which we passed at least 3 times) has hosted the Winter Olympics twice in its past, and it’s impossible to miss its massive ski jump on one side of the city.

We spent the night at a guesthouse in the tiny town of Hopfgarten. Major attractions here include a beautiful, high ceilinged church (once again with a gold-decorated skeleton inside, but this time of a child), and a meander down to the river where you can fish for your supper. It was a pity but we missed a traditional cow festival by one day – all the cattle are brought in from the fields for Winter, and to celebrate they’re paraded through the town and dressed up with silly hats and headgear. 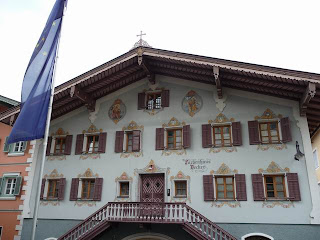 Contiki Optionals
White water rafting – While on a Contiki tour in the Summer months you can don a wetsuit, helmet and life jacket and head down the river with a trained instructor. I had a cold at the time so I wasn’t really up for braving waters as cold as in the Drakensberg, but everyone who did do it (including the bf and one of our friends) had a great time – even though I know there’s much better, much more exciting white water rafting in southern Africa. 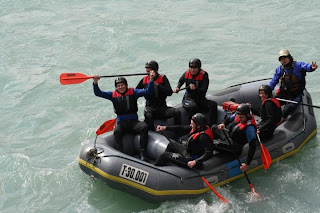 Swarovski Crystal World – I’d put this under Activities & Attractions as well, but for fans of sparkleys (I’m not one of them), you can visit the home of Swarovski Crystal and their arty museum, complete with a light and laser show. We skipped the museum, but got to check out the artsy-fartsy landscaped grounds, complete with hand-shaped hedge maze, and the scarily expensive Swarovski store. If you’re ever there and visit the store, make sure to use the restroom, just for the novelty… the taps produce LED-lit water. 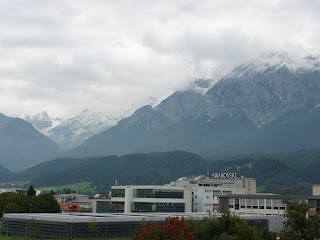 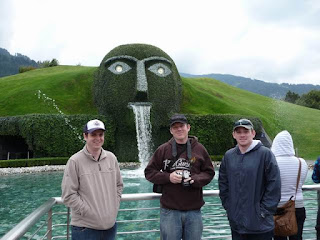 We had to take this photo below in the Swarovski Crystal World grounds because this "artwork" reminded us of the giant turd that featured in the South Park Season 11 episode entitled “More Crap”. 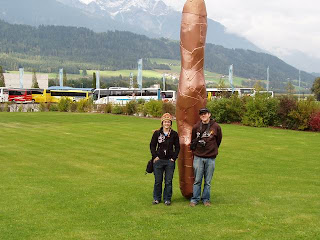 Anyway, while on the topic of Swarovski, I was stunned during my trip just how prevalent Swarovski Crystal stores are in Europe. I think we saw more of them than Starbucks outlets!

Food & Drink
Just as in Germany, it’s a case of meat and potatoes in Austria. Things we got to sample while we were in the country included:

Schnitzel
Spicy sausage
Goulash
Apfelstrudel
And, of course, Schnapps (we even picked up a bottle at the local Spar, which we were very amused to find). Just remember to hold your schnapps glass the traditional way – between thumb and pinkie – when taking a shot.

Impressions & Interesting Facts
Austria is a European nation that I would definitely re-visit, especially since we didn’t get anywhere close to Austria’s stunning capital city, Vienna. It’s a beautiful, clean and peaceful place. 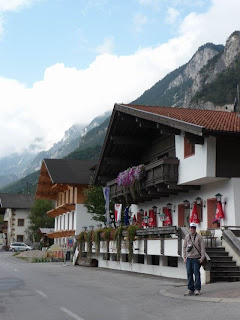 Out and About Personal Television Travel