- February 04, 2010
I'm back, having jetted back into South Africa from Egypt on Tuesday morning. Blogging here should return to normal soon but please don't be upset if updates are a bit spotty over the next few days as I try to get my life back in order, and make my way through a mammoth To Do list. However, I'm trying to make it up to you, my loyal and beloved blog readers, with a couple of posts today alone.

So start with - and you can be certain I will be blogging about my holiday in detail in future posts - here I am with an unhooded Jawa (curiously named Razor), standing in front of Egypt's oldest pyramid, the Step Pyramid of Djoser at Saqqara. This royal tomb dates all the way back to 2630 BCE–2611 BCE. That's a mind boggling 27 centuries before Christ. 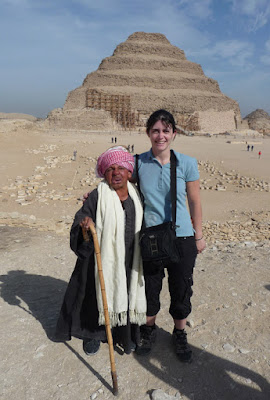 Anyway, now it's time to put on my big girl panties and make some serious grown-up decisions about my life and future. Do I put serious effort into the freelance thing? Do I do my best to secure a safe, full time job in the Durban advertising industry again? Or do I head for Europe and become a better paid wage slave there with more opportunities to travel from such a central hub? Advice is appreciated.

Also, I have decided I don't have the best luck when it comes to family affairs during my travels. When I got back from Greece in September 2007, I rushed straight from the airport to the hospital to see my grandmother when she had her first stroke (at the time thought to be a severe inner ear infection). In July 2009, the same thing happened on my return from the ICON gaming and comics convention in Johannesburg. That time though, my grandmother was not to recover from her stroke. She passed away a month later.

On Tuesday I got home to discover that my grandfather died while my sister and I were gone. Recently diagnosed with an inoperable brain tumour he was in South Africa from the UK to see everyone before his treatment began. The 12 hour+ journey, combined with his condition, and the change in weather from freezing northern England to the tropical east coast of SA took a heavy toll on my grandfather's body. He developed pneumonia, and had to be rushed to a local private hospital (without health insurance because no travel insurance company will cover someone 75+ with a brain tumour). After initially seeming to improve - which was around the time my sister and I left for Egypt - his condition deteriorated and he was moved to hospice care. Having received his wish of seeing everyone one last time, he died of organ failure with my mother and uncle at his side.

I'm now officially out of grandparents.
Film Out and About Personal Travel

The Extremist said…
Lots of ups and downs in this blogpost, don't take my silence on something you said as lack of empathy from my side. I'd like to comment on the "grown-up" decisions you need to make soon about what you're going to do for money.

I'm going to get all egocentric for a second and talk about me, because I really believe that the questions you're asking are ones we have to answer for ourselves (though we can use inputs from others, of course).

I've given immigrating/working overseas serious thought. It seemed to be the thing all middle-class white South Africans were doing at some stage :P. The way I see it, other countries and companies in other countries aren't looking for someone who wants/needs to stir things up. They want, as you so poignantly put it, a wage slave. A good worker and nothing but. Especially if you want to hold onto your identity as a South African.

If you're willing to give up your South African-ness, however, then you can become a full-blown member of the society you're working for (provided you speak the language) over time. That means you can start taking part in political discussions and maybe even getting more involved in the inner workings of the company/country you're working for.

Eventually I decided that South Africa is the place I want to try and make my mark because I realised I love the place and most of the people here. It means sacrificing the cheap, quick travel between European countries. It means being satisfied with ridiculously over-priced and underspecced "broadband," and it means living in the midst of a crime crisis(though that means you are also offered the opportunity to make a difference).

But it also means having the opportunity to have an impact on a place and a people I love. It means that for a few more years our group of friends can be relatively close to one another, and I'm close to my family. Those are the factors that swayed me.
9:44 AM

Anonymous said…
I feel I have to comment on the “wage slave” statement by yourself and The Extremist.

My personal experience is that this simply isn’t true. My previous company paid for my Master degree in an area I wasn’t even working in, they anticipated that I would move into a new field with my qualifications while still working for them, hence giving me paid time off and paying for the degree. My husband re-qualified in the UK, his company paid for it. We’ve both been on regular (i.e. at least twice yearly) training courses to stay up to date in our fields – paid for by our companies. We’ve both started at the lower end and worked our way up through either changing jobs, putting ourselves up for promotion or seeing a gap and going for it. Working hours are shorter in Europe than in SA. I don’t think we sacrificed our SA-ness (what ever this may mean) – and in fact, no-one cares if you’re from SA, because Europe is used to many different nationalities living and working together (so don’t expect special treatment because you’re from SA). It can be hard to make your mark because you’re competing against others who also thought they can get ahead of the game in their own country by gaining experience in another country.

I’m not saying it’s always wonderful outside SA. More than half our friends that worked and lived outside SA, have gone back. Speak to people who have made the move, and those who went back to SA. Ask those who made the moves what it's like and why they live where they live. Ask them what’s been good and bad.

It’s really what YOU make of it, you’ll never know unless you experience it. And it doesn’t have to be forever.

Pfangirl said…
Thanks for sharing your experience and story, Extremist:)

Sophia, thanks for your comments too.

Perhaps I didn't say it expressly but I'd use the term "wage slave" whether I was working for a big company overseas OR in South Africa. It's certainly not a comment on overseas companies. Like you said, and have experienced, many can be very good to their employees - more so than many SA companies in fact. I know this from the stories of other friends working in Europe as well.

As for the issue of sacrificing my South African-ness (raised by The Extremist), I've never been super patriotic and my heritage/cultural practices is a mix of South African and British anyway, so I don't expect I'd suffer from a major culture clash (I didn't when I was overseas in 2008), or feel my identity absorbed if I moved overseas.

I expect that if no exciting opportunity presents itself here by early April, then I will be heading for the UK - but for who knows how long? Apart from family there's not really anything tying me here anymore. Time for some new experiences methinks.
1:03 PM