Trailer Tuesday: The Book of Eli


The Apocalypse is, like, so hot right now! Forget celebrated video game Fallout 3. On the big screen in the last year alone cinema audiences have visited the bleak, not-too-distant future in Terminator Salvation, The Road and, now, The Book of Eli.

Denzel Washington is apparently channeling his inner Wesley Snipes for some blade-swinging, ass-kicking action in this action-drama about a grim loner (is there any other kind?) who wanders the sandblasted wastelands of America 31 years after a nuclear war destroyed civilisation as we know it. It turns out that unwilling warrior Eli is actually protecting something of immense value - a book that can redeem a society that has degraded into a collection of cowards, bandits and cannibal gangs. 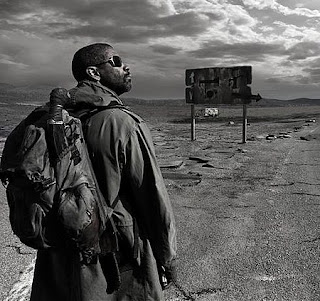 If you've watched the trailer above you'll have a very good idea what this book is. If you haven't, it doesn't matter. All you need to know is that Carnegie (Gary Oldman), the self-appointed mayor of a dangerous, ramshackle town, learns that Eli has this book and sets out to take it for his own nefarious purposes. Meanwhile, Carnegie's stepdaughter Solara (Mila Kunis) has her eyes opened to a new existence by Eli, and rushes off to join him. 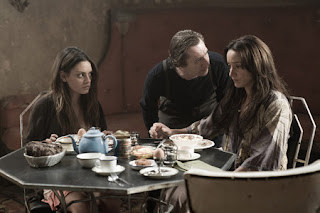 Judging by the trailer, The Book of Eli certainly isn't original. It has a strong Western vibe, and is highly reminiscent of the likes of Waterworld, The Postman and Mad Max 2 and 3 (I'm sure I'm forgetting others). This said, while The Book of Eli may apparently lack freshness, it does still look like a rousing, slickly choreographed action flick, with Washington in full badass mode.

For the record, the film comes from directing twins, the Hughes Brothers, who have proven they're not at all squeamish about violence with their previous films, Menace II Society, Dead Presidents and From Hell, the Jack the Ripper tale based on Alan Moore's graphic novel. The Book of Eli looks similarly visceral and in your face.

The Book of Eli is set for release in South Africa this Friday. It debuted in the United States on 15 January - that notoriously dead period in the North American release schedule. However, although the film didn't seize the top spot at the US box office - and has split critics neatly down the middle - it has still made over $90 million domestically. I expect the film will do similarly well in South Africa, where Denzel remains a major drawcard among all audience groups. Personally, though, I'm still unsure about rushing to see this one at the cinema. I may just wait for DVD unless my regular movie buddies are keen to make it an evening's entertainment in the coming weeks.

onelargeprawn said…
I believe "Legion" is also in the post-apocalyptic genre. It scored a paltry 17% on rotten tomatoes.
9:43 AM

Terrance said…
After seeing the trailer for this earlier this year I think I'll give it a look on release this weekend. It can't be as bad as Ninja Assassin which I saw two weeks ago after all! ;)
9:33 AM

Pfangirl said…
Ah, yes, onelargeprawn, I forgot about Legion - although if memory serves me correctly it's more literally a Biblical Armageddon than humans bringing it upon ourselves with advanced weaponry. I had no idea it did so badly - sheesh.

GreenLantern, thank you for the link. I've been meaning to see Zardoz for years, ever since seeing a pic of Sean Connery in his red diaper years ago.

Terrance, I was keen for Ninja Assassin until I saw the trailer. After some very interesting still images were released online seeing the characters in action was such a let-down. I hate CGI-enhanced hand-to-hand combat.
7:22 PM