- January 22, 2009
Yesterday 5FM and Coca-Cola made their big announcements about their annual 12-hour music festival, most commonly referred to as Coke Fest. This year it's being called Coca-Cola Zero Fest, and will be taking place at Johannesburg’s New Market Racecourse on Friday, 10 April 2009, and Cape Town’s Ostrich Farm (WTF?) on Monday, 13 April 2009. For the third year in a row we Durbanites aren't getting our own show, but that's no real surprise - I'm the first to admit our attendance rates suck when it comes to supporting these kind of events...

Anyway, although some South African support acts apparently still need to be announced, the following would appear to be the final Zero Fest line-up (unless the organisers have some surprises still up their sleeves):

International acts:
Oasis
Bullet for my Valentine
Snow Patrol
Panic at the Disco 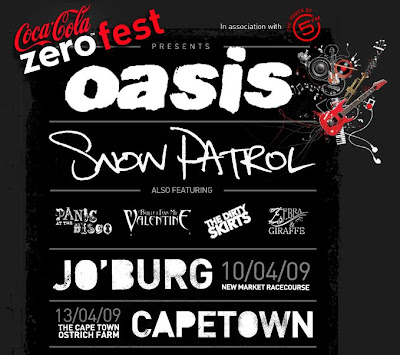 Now consider for one moment that festival draw cards in previous years included Korn, Muse, Metallica, Evanescence, Hoobastank, 30 Seconds to Mars and the Springbok Nude Girls. All of these bands have a "heavy" or "veering towards heavy" sound, and at the same time they all know how to really rock out, sending audiences wild! (For anyone interested, here's my report-back on the 2007 Coke Fest). Compare the artists of previous years to the 2009 line-up and frankly there's a striking difference in tone and energy levels.

A notable exception is Bullet for my Valentine, who are supposed to be awesomely aggressive on stage, but otherwise the 2009 international acts are a wishy-washy disappointment.

Oasis were cool maybe 10 years ago, when they had their run of hit tracks, their (What's the Story) Morning Glory? album and their famous Brit Pop rivalry with Blur. Since then though their musical impact has faded, and they've become more well known for their off-stage antics: failed marriages, drug abuse, assault charges, band break-ups and make-ups, and general arrogant, prima donna behaviour.

Snow Patrol I love listening to, but I can't imagine them being very exciting on stage. Their music is very mellow and samey - not rock concert material at all.

And as for Panic at the Disco, aren't they One Hit Wonders? I believe they have some kind of following but I hardly know them at all.

After 3 years of fantastic line-ups, Coke Fest 2009 looks to be a real dud. The name "Zero-Fest" is appropriate in more ways than one. And it seems I'm not the only one who is disappointed. Local music lovers and concert regulars are pissed off - especially since there was a big drive last year where people were encouraged to vote for the bands they most wanted to see next. The general feeling is that fans have been conned into believing they actually had a say in the process, when in actual fact South Africa has to settle for whoever they can get.

I feel sorry for people like my sister who have already booked flights to Cape Town before the line-up let-down was announced. I'm totally disinterested in Zero-Fest and if my feelings are shared by many others, the organisers can expect a much reduced turn-out this year. Dudes, you have royally screwed up...

On a totally unrelated note, my web comic Girlz 'N' Games received some love yesterday over at LazyGamer, South Africa's most popular gaming blog. Thanks for the shout-out, guys.

The next Girlz 'N' Games is in the process of being sketched at the moment, so it should be online sometime next week. Then there's the Valentine's Day edition to follow...
Books and comics Gaming Music Out and About

Anonymous said…
Ha ha, like you pointed out, maybe that's why they renamed it to Coke Zero. Zero aggression, Zero personality and most importantly Zero interest. R600 bucks for golden circle and for those acts? No thanks.

(That said, I do like Panic at the Disco strangely enough. Always makes me tap my feet and hum along to the macabre yet sophisticated fun lyrics!)
8:22 AM

Pfangirl said…
Yeah, I listened to some Bullet for my Valentine this weekend and they're not my cup of tea at all... so scratch them off my personal drawcard list.

Anyway, if 5FM and Coke couldn't get a good line-up, they should have done the right thing and just cancelled the 2009 festival like they did with Virgin Fest. That, or postpone it until good bands are embarking on their mid year tours.
9:51 AM