- January 12, 2009
This birthday weekend was one of my busiest and best in a good few years. Yay for birthdays on a Saturday! Anyway, it started a bit earlier than normal on Friday when our bosses decided to give the 20 or so people who weren't on leave that week a half-day. Hooray!

So I headed off to the Pavillion to run some errands and treated myself to a PC game birthday present: action-RPG Rise of the Argonauts. Actually I was torn between 3 games - Argonauts, the new Prince of Persia and Dead Space. POP's R400 price tag immediately ruled it out, and while Dead Space looks like it had a nifty FEAR-meets-Doom 3 horror/sci-fi premise, ultimately I couldn't resist a mythology-focused game set in Ancient Greece. Especially since they are so rare (out of interest the Look & Listen Pav store had it for R350, while all other retailers are selling it for R400).

I've yet to play Rise of the Argonauts but my understanding is that it's been racking up decent review scores in the 60s and 70s, which is good enough for me. Plus, its soundtrack has been composed by 300's Tyler Bates, so it should have a rocking score to slaughter by, even if ultimately the game is just a God of War knock-off. 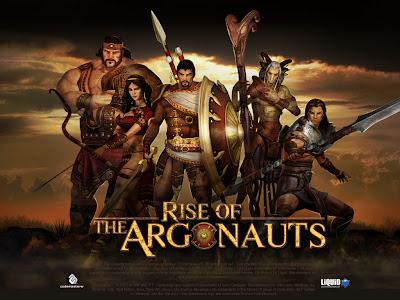 Anyway, the downside of getting out of the office early was a distinct lack of access to air-con. Friday was unbelievably hot and humid. I spent a good portion of the afternoon floating around the pool, and breezing through JK Rowling's Tales of Beedle the Bard, a collection of several wizarding world fairy tales that features prominently in the last of the Harry Potter books, The Deathly Hallows. Each of the fairy tales features a strong moral, and is followed by "critical commentary" by Albus Dumbledore. My only complaint with Tales of Beedle the Bard is that it is so damn short - I know they're simplistic fairy tales but the stories could have been fleshed out a bit in terms of detail.

Anyway, I rounded off Friday evening at the Riverside Hops where a farewell party was underway for a friend who's heading off to the UK for a few years. While we were there a major storm hit, finally cooling things down a bit.

Saturday was the big day. In terms of birthday loot, I received plenty of Pavillion shopping vouchers, which I'm to put towards a new suitcase and/or a new cellphone - both things I desperately need but both which require some serious research before purchasing.

I did receive a lava lamp though, some new sandals and this awesome, award winning Springleap T-shirt: 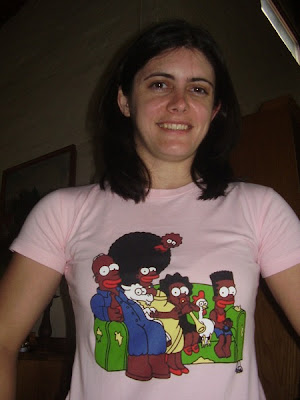 Anyway, the main activity for my birthday was heading up to Karkloof to go on the biggest canopy tour in South Africa - the Karkloof Canopy Tour. Our group of eight didn't have the best weather but it was an exhilarating, sometimes nerve wracking experience nonetheless. Basically you're all kitted up, have your body harness strapped to a steel cable, and then proceed to slide between 9 platforms of varying heights above the forest below. 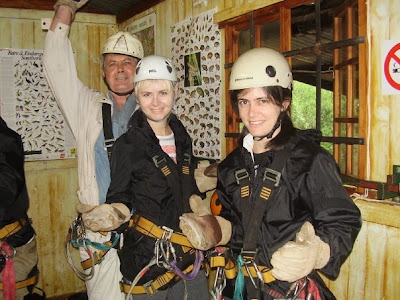 The guys took to it like fish to water. Us girls where somewhat more cautious... especially after my mother was unable to brake on the very first slide and hit the safety brake point so fast that she flipped upside down for a few seconds. Not trusting her ability to control her speed after that she then went in tandem with one of our 3 guides for the rest of the trip.

If you love the feeling of adrenalin coursing through your veins then I'd definitely recommend the Karkloof Canopy Tour. I imagine in good weather the views are quite spectacular. What was also pretty interesting as we gave a guide a lift to Howick was hearing about some of the accidents - people refusing/forgetting to brake on certain must-brake slides and hitting tree branches so hard they broke their leg in 2 places. Ow. 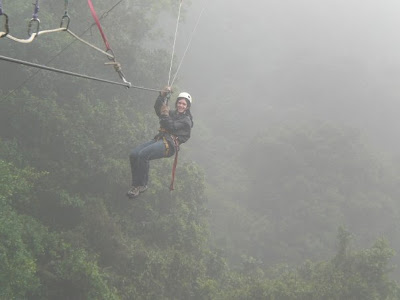 Having done the cake and presents thing, in the early evening, the bf and I went to the cinema to watch my first ever 3D-CGI movie - Bolt. Of course you can expect my full review up here soon, but if you're a pet lover I do recommend this Disney film about a Hollywood stunt dog who teams up with a cynical cat and deranged hamster to get back to the loving arms of his owner. It's mostly fluff, but it's very cute.

Afterwards we headed up to Firkin, the pub on the roof of the Pav, for drinks and dinner with friends. Seeing as the girls present had waay too many glasses of white wine, I'll leave it at that...

Sunday was a much quieter, much more relaxed day. The bf and I headed up to Kloof in the afternoon for our weekly Dungeons & Dragons session. My paladin got to dish out some serious smack-down as our little trio of adventurers took out an entire force of planar elves and celestial dire boars about to invade the town we helped set up.

Later on I rounded off the weekend with a bit of World of WarCraft - I now just have to explore 2 more areas to receive the "Explorer" title in front of my character's name. Explorer Euridycce - I like the sound of that:)

All in all, a great weekend... although I'm now suffering a bit. My crotch is bruised as if I've been in a saddle for a week thanks to the Karkloof body harnesses (guys at least get to tuck their goodies into more comfortable positions), my right bicep is killing me (I think I hyper-extended it while doing backstroke in the pool on Friday, or braking during the Canopy Tour), and I'm currently feeling very washed out - having been up since very early this morning with severe stomach cramps and nausea that are likely the result of a full weekend of eating badly. Ugh.
Books and comics Film Gaming Out and About Personal

Also, I've heard good things about Dead Space, but I probably would have opted for Argonauts, too.
4:59 PM

Anonymous said…
Remember THE MAGIC CAPE RACE, which you so loved ...? The same lot are about to inflict this on us again, this time apparently in the North Cape. SABC is broadcasting this once more.
5:36 PM

Pfangirl said…
Thanks for the birthday wishes, guys. Uh, thank you too, random Glass Repair company.

And thank you Anonymous for making me aware of the return of the Magic monstrosity. Not many vineyards in the Northern Cape though - I wonder what repetitive activities they will be subjecting contestants to week after week...
9:44 AM