- November 17, 2008
Well, in terms of what I got up to this weekend Friday evening was pretty much just dinner at the surprisingly quiet Pavillion with friends.

Before heading out for the evening I had planned to make the journey to the new continent of Northrend in World of WarCraft expansion Wrath of the Lich King - just to have my first glimpse of the island in all its frosty, battle-scarred glory. Imagine my disappointment when, having loaded the game, upgraded my account and watched the opening cinematic for the umpteenth time, I discovered there was an additional 650MB patch to download.

Anywhere else in the world this wouldn't be an issue, but in South Africa with our slow broadband and 1-3GB monthly download restrictions, every time there's a patch bigger than 100MB it becomes a frustrating issue. Normally we end up forking out for extra cap.

Anyway, as I learned later in the weekend, I already had downloaded the patch, as well as its 48MB follow-up, so all I needed to do was re-run them. While the new expansion included the big 1.3GB patch of a month or so ago, it didn't incorporate the 2 smaller ones that followed it, or register that they were already in my game folder.

So no WOW for me on Friday.

Saturday was busy. We headed up to the storm-damaged Hillcrest for our weekly Dungeons & Dragons session. Now with 3 attacks, I'm pleased to report that my paladin was dishing out damage in every direction with his greatsword, cleaving ice goblins into pieces. I really hope the rest of the party copes when I'm absent from this coming week's session - company Christmas parties take priority after all.

On Saturday evening we got all dressed up and headed off to the Durban City Hall for the 25th Anniversary of the Durban Pops, an evening of classical music performed by the KZN Philharmonic Orchestra. Since I've been seeing the bf, we've accompanied his parents to this prestigious fund-raising event, organised by the Kloof Rotary Club, almost every year. This year, despite being an important anniversary, was probably the most subdued I've ever seen the Pops. 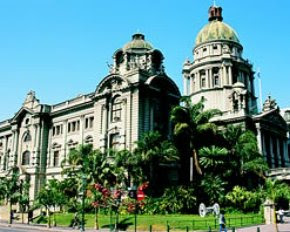 I've been trying to think of reasons for this general lack of atmosphere and drop in attendance. Of course there's the credit crunch to blame, as well as the usual lack of advertising. Then there's the age issue. In our mid-twenties, we were among the youngest people there. Looking over a sea of white hair, I'd guess-timate that the median age of Pops attendees is 60. And nothing is being done to attract younger people to replace the retirees shuffling off this mortal coil, or counting their pension pennies at home. As for the middle-aged attendees, their number drop suggests that many are hot-footing it out of the country.

Anyway, I do believe if the organisers want these cultural events to continue, they need to start catering for younger audiences (I have much the same opinion about the Barnyard Theatre). Pomp and ceremony is fine, but you have to start making things more contemporary. References to Springbok Radio? Give me a break.

My suggestion would be to increase the amount of material that has been used in pop culture. The orchestra did play a John Williams Olympic Games track, but where was Star Wars or a general tribute to the legendary composer? That would be amazing - there really is nothing like classical music performed by a live orchestra. In terms of music that I did recognise during the evening, most of it had been sampled by Hollywood, or used in high-profile theatre productions: the Sabre Dance, Victory, Lord of the Dance, O Mio Babbino Caro, Greensleeves and a Tribute to Henry Mancini.

Oh, and we also spent the evening having to endure the interrogation that is becoming all too common these days - "How long have you been together now? Oh, so when are you getting married?" Bah, what do you expect me to say?

Back home after the Pops I was feeling surprisingly wide awake, and ended up watching the excellent The People Vs. Larry Flynt until early in the morning. I'd actually never seen the film before, which is amazing because freedom of speech, anti-censorship and the right to satire are all issues very dear to my heart. The bf and I did devise a drinking game while watching the movie though - every time Courtney Love (in uber-slag mode) flashes her boobs, you have to take a shot!

Sunday was one of those stay-in-your-PJs-and-veg days. I finally got Wrath of the Lich King up and running and began questing in the Howling Fjord region. It was surprisingly quiet, presumably because the power levellers have moved onto bigger and better things. However, there were Death Knights EVERYWHERE.

In keeping with the spirit of anti-censorship, we also watched the South Park movie, Bigger, Longer & Uncut. I realised I have a much greater appreciation for it now than I did when I first saw it years ago - probably because I'm more admiring of the film's musical slant. Where else would you find such memorable tracks as "Blame Canada", "Shut Yo Face Uncle Fucka" and "Kyle's Mom's a Big Fat Bitch"? Anyway, plans for Sunday evening were scuppered when the bf had to go to work for emergency technical support. It did at least give me time to make progress with the latest Girlz 'N' Games comic strip (coming here soon!) while watching teen-centric thriller Disturbia out of the corner of my eye. I've decided I actually really like Shia LaBeouf - when he isn't swinging from vines, and trying to steal iconic hats, that is.
Film Gaming Music Out and About Personal

Anonymous said…
"began questing in the Howling Fjord region. It was surprisingly quiet"

There are 2 starting areas in Northrend. For Horde, Borean Tundra is much busier because of the zep from Ogrimmar. The reverse is true for Alliance because the Howling Fjord is by ship from Stormwind.
3:20 PM

Pfangirl said…
Ah, thanks Anonymous. Undercity is my normal city of choice when I'm in Azeroth, and the zeppelin there takes you to the Fjord.

I'll make sure to check out the Borean Tundra area before I decide which starting area I prefer questing in.
9:14 AM

Pfangirl said…
I used to think Courtney Love was a pretty good actress until I realised that very point... :P
8:44 AM