- August 20, 2012
Not only is Brave Pixar’s first family adventure with a female lead but it’s also the first film from the celebrated animation studio to fit the “magical” folk tale mould. Understandably then, expectations around the movie were high. And while Brave is certainly watchable, unfortunately it doesn’t deliver the full Pixar dazzle. 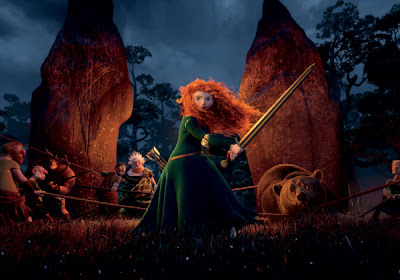 To describe it another way, Brave doesn’t display any of the Pixar inventiveness that makes you chuckle, or sends your heart soaring. You know, the intricately thought-out world creation; the surprisingly sly satire of our world; all the unexpected narratives (superheroes sent into hiding by endless lawsuits; a robot trash compactor that craves love; monsters that harvest children’s screams as a source of energy). There’s none of that engaging novelty in Brave.

Instead, the film feels more like a product of Pixar’s parent company, Walt Disney Pictures. Or, more specifically, it feels like one of those animated movies immediately preceding and following Disney’s late 80s/early 90s resurgence, which ran from The Little Mermaid through to The Lion King. Think movies like Basil the Great Mouse Detective and Mulan. They’re entertaining, but definitely flawed – often in terms of conventional plots and rushed conclusions. Brave is a similar mixed bag.

Pixar’s latest takes a while to get going. Set in the rugged Highlands of Medieval Scotland, Brave’s plot is powered by the antagonism between free-spirited princess Merida (voiced by Kelly Macdonald) and her straight-laced mother, Queen Elinor (Emma Thompson). Whereas Merida would rather spend her days climbing cliffs and practising archery, Elinor is intent on morphing her daughter into a mannered lady fully capable of handling the diplomatic duties ignored by the childish Scottish lords – including Merida’s burly but soft-hearted father, King Fergus (Billy Connolly). Matters come to a head when clan leaders Dingwall, MacGuffin and Macintosh (Robbie Coltrane, Kevin McKidd and Craig Ferguson) arrive to arrange a betrothal between their sons and Merida. Furious and desperate, our heroine turns to an unreliable, bear-obsessed witch (Julie Walters). The result is a spell that unleashes chaos. 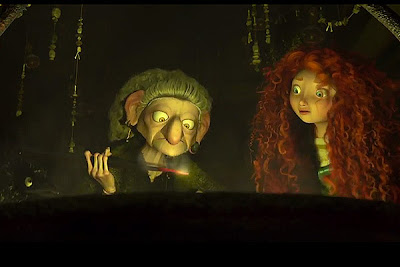 To get to this point in the film, though, the audience has had to endure a series of tedious arguments, exasperated sighs and eye rolls. And it’s not like we haven’t seen this form of teenage rebellion a hundred times before. It’s dull and predictable – especially when you contrast it with 2011’s Tangled (also from Disney) which put a much more novel passive-aggressive spin on parent-child conflict.

Anyway, once Merida’s spell is cast, Brave becomes a lot more fun and action-packed. Although the many night time scenes are a bit too dark in 3D, there’s no denying the beauty of Brave’s animation – both in terms of the setting and character design. The bear that accompanies Merida on her quest to break the spell is especially well-animated, featuring the facial expressions of a dejected, but cute, cuddly Labrador.

Unsurprisingly, once it breaks away from the clichéd sulking and outbursts, Brave also becomes a lot warmer emotionally, and more affecting. I confess that I cried at least once, although it’s barely a sniff on the Up Scale of Upsetting. 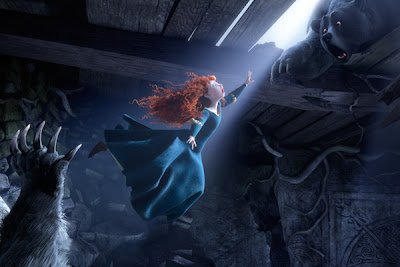 On this note though, a big problem in Brave is the time span of events. If The Dark Knight Rises (my review) felt like it was set over too long a period, here things are too condensed. Merida has less than 2 days to break the spell and restore normality. Although the character curiously doesn’t seem stressed at all about this deadline, 48 hours isn’t nearly enough time to explore the full dramatic potential of the situation. A highlight scene in the film is a light-hearted fishing sequence that suddenly turns harrowing, and Brave could really have done with more of these moments to convincingly depict the mending of a damaged relationship... while an even greater danger looms. Instead, all too soon, we arrive at the climax, and blip, it’s all over.

Even setting Brave’s events over a week would have been improved matters. Tension would build as Merida is pursued on multiple sides, and has to contend with the terrifying, flick-flacking transformation of a loved one she can neither predict nor stop. But then again, perhaps this is all a little too deep and dark for a family film watched by many young children? For the record, there are already several intense moments in Brave that could frighten the under-5s.

As a side note, it hasn’t been well publicised, but Brave’s initial (female) writer-director Brenda Chapman left the project during its development, citing “creative differences.” This departure may explain a few jarring tonal shifts in Brave, as well as a couple of intriguing concepts that are mentioned and then evidently abandoned. For example, the queen knows where the witch’s hovel is, suggesting that she too has visited the crone. However, this plot point is never explored further.

And this really is the overriding sensation you receive from Brave – that the film has consistently steered away from opportunities to be memorably stand-out and smart. Instead of being, well, brave, the film has stuck to the safe, slick, stripped-down route. And frankly that’s not enough to win the hearts of audiences, given that this mostly sober adventure is competing against the madcap, colourful Ice Age and Madagascar franchises. Brave is watchable but far from remarkable. 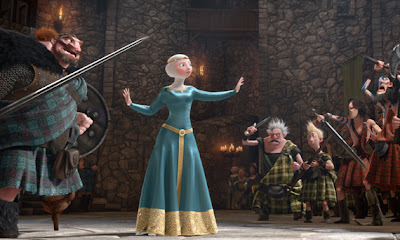 Dan O. said…
The first 30 minutes or so had me pumped up like no other but once that big twist in the story happens, it all goes downhill from there. However, kids will love the heck out of this film and you can’t go wrong with them. Nice review.
1:47 AM