- July 25, 2012
Upfront, let’s get a few important questions out the way about The Dark Knight Rises, the final film in director Christopher Nolan’s Batman trilogy.

1) Will I be able to understand masked villain Bane?
Yes, most of the time. With concentration.

2) Is Anne Hathaway’s Catwoman bland?
In combat yes. As a character, definitely not.

3) Is there an after-credits sequence I should wait for?
No.

4) Is The Dark Knight Rises as good as or better than The Dark Knight?
Unfortunately, no. Rises is very good. It’s worth watching on the big screen. But it’s not the brilliant series conclusion that audiences wanted. 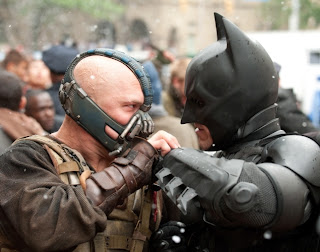 Now The Dark Knight Rises is a very different kind of superhero film to, say, The Avengers (my review). Apart from its sombre tone and commitment to deeper thematic exploration, its greatest difference is that this is a big screen comic book adaptation with something you rarely see: Finality.

In the Marvel Cinematic Universe, even though every film ends with the restoration of peace, you know that other villains are lurking, to cause more trouble for our hero in the inevitable sequel. In Nolan’s Bat Universe, things are a bit different. We’ve already seen fan-favourite villains like Ra's al Ghul and Two-Face given a few blips of screen time before being eliminated, never to return… and there’s more of that in The Dark Knight Rises. For better or worse, things conclude.

Personally I appreciate this sense of resolution, but it could easily upset some Bat purists. After all, Neil Gaiman hit the nail on the head in his tale Whatever Happened to the Caped Crusader?, where he identified Batman’s most defining feature as his tenacity – his “never back down” spirit – which is common to the character’s many, many different interpretations over the decades. Well, until now, sort of.

For the record, the other films in Nolan’s Bat trilogy have drawn a hefty chunk of inspiration from major Batman comic stories – Batman Begins contained elements of Batman: Year One, The Dark Knight felt very The Long Halloween – and The Dark Knight Rises is no different. 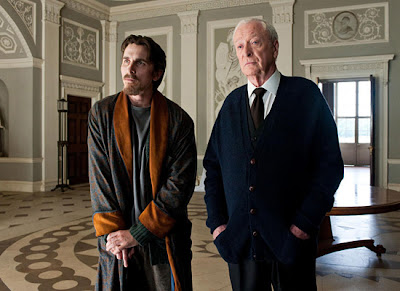 Evidently most influenced by Frank Miller's The Dark Knight Returns, Rises is set 8 years after the events of The Dark Knight and in that time Bruce Wayne (Christian Bale) has hung up his cape and cowl, and taken to moping around his mansion. Meanwhile, Gotham City has enjoyed a period of peace and prosperity but there are those, like Wayne and Commissioner Gordon (Gary Oldman), who know that the city’s eradication of organised crime is based on a lie: the martyring of district attorney Harvey Dent. Years of suppressing lies have poisoned Gordon, Wayne and Wayne’s butler Alfred (Michael Caine), and the latter, always close to tears, provides the most poignant moments of the film.

Enter hulking terrorist-with-a-cult-following Bane (an utterly unrecognisable Tom Hardy). Apart from a few origin tweaks, and the bigger mistake of being “de-menaced” at the film’s end, this is a well-rounded and satisfying interpretation of the character. Bane is out to expose every deception, and impose a new world order on complacent Gotham – dragging the privileged and powerful from their gilded towers, and creating a more equal society before blowing it all to hell.

With this threat, bam, Batman is back... much to the delight of Wayne Enterprises CEO Lucius Fox, played by Morgan Freeman with a mischievous twinkle in his eye. Freeman also gets to dish out the wittiest lines in what is otherwise a very grim-faced film.

Batman’s big return sequence is exhilarating and, frankly, it’s exactly what the character should have been doing every night since the Harvey Dent incident, instead of playing Howard Hughes. Putting his body on the line. Picking up injuries. Secretly helping Gordon. Continually saving the day. All the while dodging career-climbing cops like Matthew Modine’s character. But nope, uncharacteristically it’s taken almost a decade for the Caped Crusader to get off his ass and swoop into action again.

Still, I would have happily 5-starred The Dark Knight Rises up until this point. It’s an all-round class act, and Batman even has a new “toy” that brings an exciting aerial component to his crime fighting style. The resulting glut of Gotham skyline and overhead shots scream for the film to be experienced at IMAX. 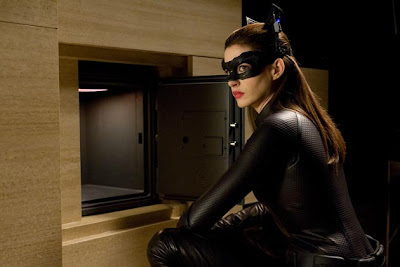 For the record, by this point in Rises we’ve also been introduced to Anne Hathaway’s Catwoman – referred to in the film’s credits as Selina, and by newspapers onscreen as the Cat. As many critics have already noted, this is a very different Catwoman to Michelle Pfeiffer’s schizoid sex kitten in Batman Returns. It doesn’t make her less interesting however.

Hathaway’s “realistic” Selina is a predator pouncing on the rich and lecherous for personal gain. Going back to the character’s Golden Age roots, she’s a consummate actress, con artist and safe cracker. But the film also acknowledges the character’s darker contemporary interpretations: Selina is a survivor with a past she’s both ashamed of and trapped by. And like a cornered feral feline she’ll just as easily betray or assist you if it will secure her freedom. As a special treat for comic fans, she even comes with Holly Robinson (Juno Temple) in tow, and has her own little slumdog defender moment.

Personality-wise Hathaway’s Catwoman is nice and layered, even if her love-hate relationship with Batman is more assumed than explicitly sexually charged, as it was in Batman Returns. It’s a pity then that combat-wise Selina is dull: neither a match for her video game counterpart nor Scarlett Johansson’s Black Widow. In fact, it’s worth noting at this point that fight choreography throughout Rises is pretty meh and unfulfilling. But then again, Nolan has always seemed more comfortable with vehicle chases than fisticuffs in close-up.

It’s around the middle point of The Dark Knight Rises that you realise what the film is missing, and that’s the sharp focus and coherence of The Dark Knight. Despite being driven by an agent of chaos, the plot of Dark Knight sprang effortlessly and logically from point to point. In Rises, there’s quite a bit of narrative straining... and incredulity. 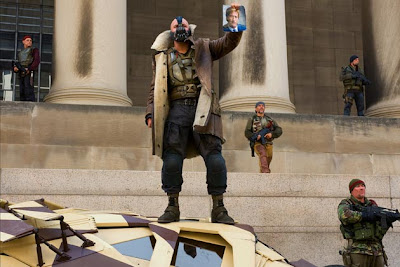 For example, just like how Idris Elba’s captain was saddled with important exposition in Prometheus, Alfred is the character weirdly assigned the task of telling Bane’s backstory to the audience (and as a side note, let’s not forget that Heath Ledger’s Joker was made all the more chilling and enigmatic for defying a set origin tale). Meanwhile, a romance blooms from apparently nowhere between Bruce Wayne and investor Miranda Tate (Marion Cotillard) – but the relationship has nowhere to go because it’s suddenly time for brute-with-a-brain Bane to initiate a terrorism scheme that makes 9/11 look about as well-conceived as a toddler’s piece of macaroni art.

The realisation of this plan is quite magnificent on the big screen, but it has a downside. Suddenly Catwoman and – worst of all! – Batman practically vanish from the film. And I’m sorry; as much as I adore Gary Oldman’s Jim Gordon and enjoy Joseph Gordon-Levitt’s addition to the cast as a courageous young cop, I’m in the cinema to watch Batman, not Gotham City: The Resistance. Sidelining the drawcard hero for a good chunk of a 3 hour film is a major miscalculation. Especially when the aftermath of the terrorist attack is so clean and controlled that it’s difficult to swallow… particularly in a film series that has always sought to bring greater realism to masked heroes. Personally, I didn’t buy what’s supposed to have happened – although it does at least include one doozy of a cameo.

Eventually The Dark Knight Rises does haul itself out of its slump, thank God, and one onscreen emergence is quite literal – Nolan’s metaphorical nod to the Lazarus Pit perhaps?


Anyway, the conclusion of Rises has no shortage of signature moments and “reveals” to delight comic book fans. There’s a lot of coolness stuffed into the tail end of the film, although the smart cinemagoer may by unsurprised by the twists – particularly if they’re familiar by now with Nolan’s cinematic sleight of hand. You know, his typical trick: throwaway lines and titbits of information that are suddenly revealed to have major significance. Then again, my ability to see past the feints may be the result of months of exposure to fan speculation. 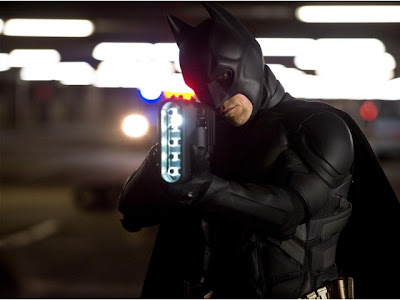 In the end, as the credits rolled on The Dark Knight Rises, I did have a smile on my face. The film gave me enough of what I wanted but I wasn’t left sideswiped by its smarts like I was with its predecessor. Rises goes bigger, but it also goes messier – and this concluding chapter, though consistently swinging its punches like its hero, still stumbles in the bloated melee… just like its damaged hero.


This review originally appeared online at The Movies.
Books and comics Film