- July 23, 2012
Toxic prolonged grief… Just like the mists that continually envelop the forlorn English village where The Woman in Black is set, the disturbing effects of pathological mourning are everywhere you look in this consciously old-fashioned horror film from resurgent Hammer Films. The movie is made all the stronger for this consistently applied thematic focus (so often AWOL in contemporary genre entries), as well as its retro approach to supernatural chills. 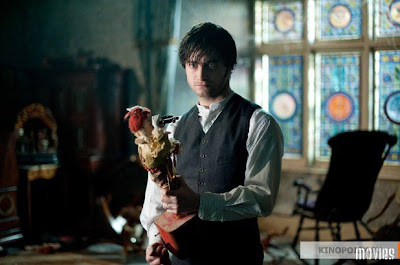 Based on Susan Hill’s popular novel and its theatre adaptation, The Woman in Black centres on young Edwardian Era solicitor Arthur Kipps (Daniel Radcliffe), who is still brooding over his wife’s death in childbirth 4 years earlier. Arthur is so distracted in fact that his job is at risk, so he certainly can’t refuse the task of trekking off to remote Eel Marsh House on the English coastline and wading through piles of paperwork to wrap up the estate.

Making Arthur’s work even harder is the hostile local community, sent sullen and distrustful by decades of child suicides. Even the welcoming Sam Daily (Ciarán Hinds) and his wife (Janet McTeer) have suffered tragedy, but Sam is dismissive of “superstitious” claims that sightings of a woman in black precede these awful occurrences. Without Twitter and Facebook for procrastination purposes, afterlife-obsessed Arthur starts investigating every noise, locked door and vision at Eel Marsh House for an explanation of events.

In terms of comparisons to other films in its genre, The Woman in Black is probably closest to historical horrors The Others and Haunted, a little-seen novel adaptation starring Aidan Quinn and Kate Beckinsale. It’s also got elements of contemporary-set Darkness Falls and Dead Silence.

Vengeful spirit tales are nothing new, but The Woman in Black goes the classic, classy route, eschewing special effects, gore and gimmicky last-minute twists for skin-crawling atmosphere instead. Why blow your budget on overblown CGI-effects when close-up shots of mottled 19th Century toys will do instead, particularly when these glass-eyed creations seem to come to life by flickering candle light? Director James Watkins and cinematographer Tim Maurice-Jones have certainly not skimped on visually memorable moments in The Woman in Black. The child deaths are particularly mesmerizing. 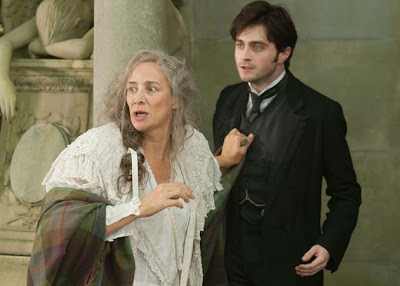 In fact, I’m hesitant to rate The Woman in Black too highly because despite how much throwback fun it is, and how much it gets right, the film is VERY obvious – and resorts too often to repetition to generate scares. Plot-wise, meanwhile, the movie even feels vintage. On occasion it even comes across as less of a horror tale and more of a mystery thriller from, say, Sir Arthur Conan Doyle (who actually gets a brief mention in the film as a high-profile paranormalist of the period).

For the record, in terms of performances, Radcliffe does fine. It’s admittedly weird to see the 22 year old former Harry Potter star playing dad to a 4 year old, but he’s definitely the character of Arthur Cribbs here, and not simply The Boy Who Lived transplanted to 1908. The most poignant moments in The Woman in Black though are reserved for veteran talents Hinds and McTeer, whose characters’ grief-stricken behaviour feels more real-world than most, and actually explores the impact a child’s death can have on a marriage.

This granting of breathing space for characters to emote, mysteries to resolve and, most importantly, tension to build, is one of The Woman in Black’s greatest pleasures. Combined with a satisfying ending and a final understated shot that makes one helluva impression, the end result is a good old fashioned ghost story. It may be pretty bloodless, but that doesn’t make The Woman in Black any less enjoyable or effective. The faint of heart, beware! 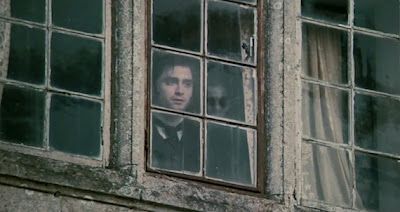 Anonymous said…
ITS JUST LIKE THE FILM UP BUT NOT AS SCARY
11:30 AM

Anonymous said…
Not as scary as UP but still good
11:32 AM

Anonymous said…
I think UP is acctually a shit scary film!
11:39 AM