- July 11, 2012
Pretoria locals had their chance to geek it up at UPCon back in April. Now it's the turn of the Joburgers to rock out with their... uh... D10s out. Because, yes, this coming weekend (13 - 15 July) is the 21st annual ICON Games and Comics Convention. And although the entire set-up would likely fit into a single panel hall at Thee Almighty San Diego Comic-Con, ICON is South Africa's biggest convention of this type. 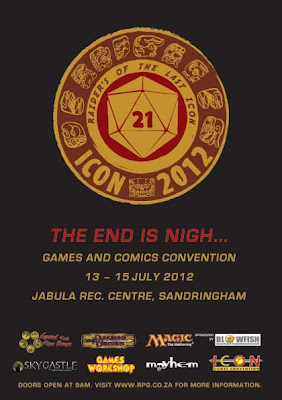 Everything you need to know about ICON 2012 can be found in this PDF brochure.

In a nutshell though, the 3 day event is taking place at Jabula Recreation Centre in Sandringham. Entry is R20 per day, or R40 for the whole weekend.

(For the record, this year's theme "Raiders of the Last ICON" is referencing the supposed Mayan Doomsday prophecy and doesn't mean 2012 will be the final ever event).

Anyway, at ICON 2012 There will be tabletop role-playing, board games, wargaming, assorted card games, anime screenings, evening LARPs, a miniatures painting demo, cosplay competition as well as national tournaments for Magic: The Gathering and Settlers of Catan. Whether you're a competitive gamer, casual player or just curious, you're catered for... and if you just want to wander around the venue and inhale the atmosphere there will be dozens of exhibitors peddling their geeky wares - ranging from comics, cards, figurines and wargaming accessories to handmade geek plushies and elf ears. Food and drink is on sale all day.

Now this is all fairly standard content for a gaming and comics con. ICON 2012, however, also offers a comedy fest on the Saturday night for all your pop culture giggles (brace yourself for Cthulu jokes!), as well as a 3-course dinner on Sunday night to cap off your ICON experience. And this year there's even 2 workshop sessions on sex and sexuality-related issues when role-playing.

If that wasn't enough Exclusives is also running an ICON 2012 competition with 2 video gaming(!) hampers worth over R2 500 up for grabs.

If you are in Joburg this weekend, I heartly recommend that you make an appearance at ICON. A gaming and comic con is something you have to experience at least once in your life, and the local community - though small - is very friendly, candid and welcoming.

You can read about my experiences at ICON 2009 here and here for a better sense of what to expect.

Out of interest, Cape Town's big gaming con takes place next month. Those locals who are more geek than hipster can hit Dragonfire 2012 at the University of Cape Town from 9 - 12 August, around the time of the Women's Day public holiday.
Books and comics Film Gaming Out and About