- July 26, 2010
During March last year I blogged gleefully about the announcement of video game sequel American McGee's Alice 2. Now I'm pleased to report that there's been a fat batch of new information and images released relating to Alice 2, including the revelation of the game's official title, Alice: Madness Returns.

The video game - for PC, Xbox and PS3 - is the long-awaited sequel to 2000 action-adventure American McGee's Alice. As with the first game, Alice 2 is designed by American McGee (and developed at his Shanghai studio Spicy Horse studio), while Electronic Arts is the game's publisher. 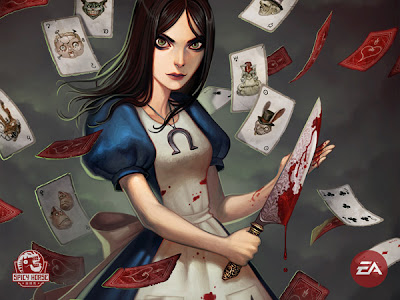 The original American McGee's Alice was a macabre take on the beloved characters created by Lewis Carroll, pushing the Alice mythos into nightmarish territory that Tim Burton didn't even get close to touching in his recent film. American McGee's Alice ran with the premise that sweet, innocent Alice survives a fire that kills her entire family. Shattered by guilt, Alice ends up catatonic and suicidal, confined to a mental institution. Ten years later, teenage Alice returns to Wonderland only to find it - as a representation of her damaged psyche - dark and twisted. To restore order to the world, and free herself from grief, Alice has to combat her inner demons, embodied by some of the most disturbing and evil of Wonderland's inhabitants.

Although American McGee's Alice certainly wasn't a perfect game, it oozed atmosphere and has gone on to become a cult favourite due to its distinct gothic aesthetic. And if you visit this blog frequently, or just so happen to glance up at its image header, you should realise that I am a huge Alice fan. I've used American McGee's Alice as my avatar on forums and Twitter for years now - and even cosplayed the character once. But enough of my dorkiness... 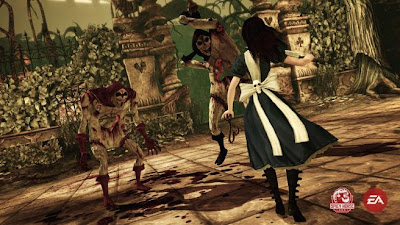 The storyline of Alice: Madness Returns is as follows:

Eleven years ago a horrific fire took Alice’s family from her and left her terribly burned—and her mind terribly scarred. Afterwards she was confined to Rutledge Asylum, struggling to come to terms with her demons by slipping into her fantasy world of Wonderland. Now, after ten years, she has finally secured her release--yet she still bears the heavy psychological burden of that tragic event.

In Alice: Madness Returns, Alice is released from the asylum to a London psychiatrist’s care. As nightmarish hallucinations continue to haunt her and invade her reality, she seeks to understand her torment in order to recover herself. Her mind in tatters, she is unable to resolve the fear and neuroses prompted by her strange memories, dreams, and visions. Her relocation to London seems only to add to their number and intensity.

Perhaps she’ll do better in Wonderland. She always has. She travels there, seeking what the “real” world can’t provide: security, knowledge, and the truth about the past. But in her absence, Wonderland too has suffered. Something has gone horribly wrong, and now a great evil is descending upon what once was her beautiful refuge. Can Alice save Wonderland—and herself—from the madness that consumes them both?

There are a few things that are immediately obvious about Alice: Madness Returns.

1) The game really takes advantage of the graphics card evolution experienced over the past decade. Alice looks beeeyoootiful in comparison to its admittedly dated-looking, ten year old predecesor.

2) Alice: Madness Returns is definitely a game for adults only. If the hideous skeletal playing card guards in the screenshots weren't enough enough of a clue, there's also the teaser trailer below... which is guaranteed to give you the heebie-jeebies.


As a final note on the game, kudos to EA for choosing The White Rabbit as the "face" of their Alice Twitter account. It's very clever that we, like Alice, get to "follow him" in order to stay up to date with developments related to the game.

Alice: Madness Returns is currently set for release sometime in 2011. I'm really looking forward to it. 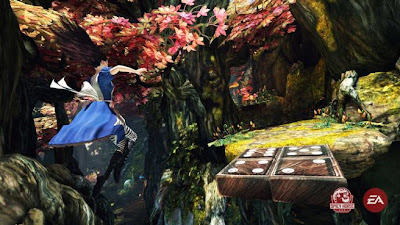 Terrance said…
You should give Tim Schafer's Psychonauts a try as well. Its got a lot of similarities to the twisted world of Alice and coming from the guy that Made Full Throttle, Monkey Island and Grim Fandango its fantastic as you'd expect.
11:54 AM

Pfangirl said…
Oooh, thanks for reminding me about Psychonauts, Terrance. I bought it ages ago for my PS2, having only heard outstanding things about it - as well as being a huge Shafer fan. I just haven't got around to playing it yet.