- July 12, 2010
This is a better late than never review, especially since this film can now be hired from DVD/video stores, and will be available for purchase in South Africa from August.

The Road is just one in a recent batch of films set in a bleak, post-Apocalyptic future. The difference though is that The Road isn’t a rousing, stylised blockbuster, such as Terminator: Salvation or The Book of Eli. It isn’t about explosions or gun fights as the main characters wander across decimated landscapes. In fact, of all post-Apocalyptic movies, The Road is arguably the most serious, realistic and prestigious – seeing as it is based on Cormac McCarthy’s 2007 Pulitzer Prize-winning novel of the same name. Unfortunately though, The Road doesn’t live up to its highly acclaimed source material, and the end result is a disappointment.

Set in the near future, after an unexplained cataclysm charred the earth and blocked out the sun’s rays, The Road centres on an unnamed father (Viggo Mortensen) and son (Kodi Smit-McPhee) who are roaming the grey, freezing wasteland that is the American east. The human race is nearly extinct and those people who are left are starving, ragged scavengers. Some are good. Some are cannibals. But nobody is to be trusted, and everyone is on their own. Although he feels increasingly hopeless, the father is intent on living as long as possible, while he instills values and a sense of humanity in his son – who was born in the aftermath of the cataclysm, and therefore knows no other world. At the same time though, the father carries a gun with two bullets for the inevitable day when their meagre food stores run out and they can go no further.

The Road has a really interesting premise, but unfortunately it’s not enough to save the film. Of course it’s all quite depressing, but it’s not the unrelenting bleakness that hamstrings the film adaptation. Rather it’s how surprisingly uninvolving the whole project feels.

Performances are not at all to blame for this, however. Although Smit-McPhee lacks the emotional impact required of him as a child who represents wisdom and hope for humanity’s future, Mortensen is quite brilliant – and award worthy – as a resourceful, clearly cultured man driven to perform heart-breaking, frequently feral, acts out of love for his child. Charlize Theron and Robert Duvall are also both excellent in small supporting roles, where they respond less selflessly, and far more understandably, to the doomed world in which the characters find themselves.

What apparently is responsible for sapping all emotional investment from The Road then is the film’s episodic approach to storytelling. Father and son meet a traveller on the road. He moves on. Father and son find a food store. They load their cart and continue. The boy gets sick, but recovers. The father is injured, and treats his wounds. Etc, etc. Although such a plodding story structure is lifted straight from McCarthy’s novel, it does not translate well to film. It’s worth noting at this point that much of the book’s emotional impact came from its simple prose, which describes in minute, often step-by-step, detail what father and son do to survive. This kind of immersion is impossible to bring to the big screen without a tedious voiceover – which director John Hillcoat fortunately avoids.

Still though, it is criminal to take a tale of family love in such traumatic, unusual circumstances and make it so dull and emotionally disengaged. There is perhaps one brief moment, when father and son are trapped by cannibals, when the viewer tenses. Otherwise, unrelated events simply unfold one after the other, producing no response whatsoever from the audience.

The Road experienced mass walkouts when it screened in South African cinemas earlier this year, making it one of three films recently to suffer such a rejection by moviegoers (the others were The Men Who Stare at Goats and The Hurt Locker). Despite how gloomy it is, The Road is not a terrible movie. What makes it a disappointment though is just uninvolving it is – especially when you consider that it’s based on a powerful novel that gains its impact through an understated expression of emotion. 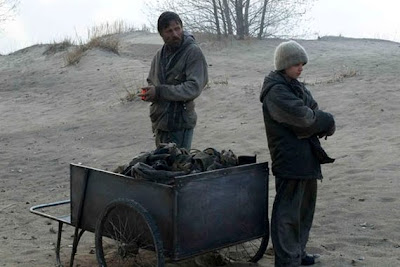 Cleric said…
Hmm. Sounds like something to watch... when there is nothing else to watch :P
11:32 AM

Chelsea said…
Hi Noel. I've visited your blog (obviously) and your website. Your blog's name is pfangirl, but I don't see anything about Michelle here. Your site hasn't been updated for years. Wow, this starts to sound like an attack! LOL, it's not. I wanted to ask, are you still a Pfan?
Chelsea
9:24 PM

Hey Chelsea, I'm still a pfan. I was in the cinema both opening weekends for Hairspray and Stardust:) I just don't have time to run this general movie/pop culture blog AND the Michelle site any more, and seeing as Bond and co. are doing such an awesome job with Pfeiffer online news, it was my Michelle site that I stopped updating. Keep the pfandom strong, and have a great day!:)
10:00 AM

Chelsea said…
OK, I'm glad you're still a Pfan. too bad abouit your site though, especially now that Pfeiffertheface has stopped posting Pfeifferstuff. But I understand. Good luck with your blog :D
Oh, and if you want, visit my blog: pfandom.blogspot.com
It's about Michelle ;)
Chelsea
12:31 PM