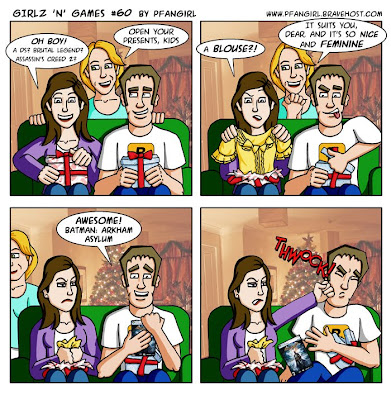 I think this Girlz 'N' Games comic will probably have more significance for the geeky gamer girls out there. I don't really know if guys are ever in the situation depicted above unless they receive "sensible" gifts like socks, deodorants and neck ties. Blergh.

Anyway, I'm sure I'm not the only woman out there to have had this Christmas morning gift-receiving experience. Some people just do not "get" how a woman can enjoy supposedly masculine things like gaming and hi-tech gadgetry. These people have a built-in resistance to giving us anything technological, with the end result being that we receive toiletries, hair clips, frilly tops and assorted other girlie crap while the guys get all the good stuff!

The natural response to this situation is seething jealousy. Or the hijacking (at least for the day) of the much more interesting gifts that the men and boys received. Graphic novels and comic treasuries, DVDs, remote control helicopters, MP3 players, figurines, camping accessories... mmmmmm. 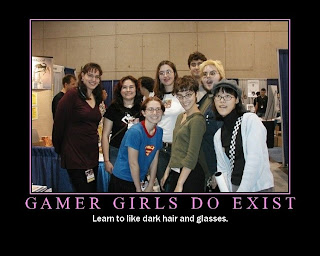 This comic was a long time coming. I actually came up with the idea for it around Christmas 2008 but decided to keep it in reserve until the 2009 festive season. By then though, I'd already thought up the Christmas themed Girlz 'N' Games #59. Still though, I couldn't bear to put the concept back into the unused ideas folder - I thought it was too good and identifiable not to share right now. So I drew it up anyway. After all, in 2008 I ran 2 Christmas themed Girlz 'N' Games strips - #35 and #36 - back to back, and that worked out fine. 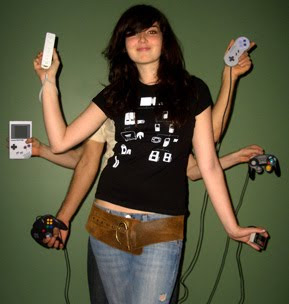 amok.leonard said…
They're not going to buy gifts that they themselves do no understand.
10:15 AM

Dante said…
Yes well, part of being a chick means that you can just take what the man got. So really, don't think of the cooler gifts men get as "theirs". Think of them as "mostly yours"
12:41 PM

Pfangirl said…
Good point, Steven! And good point, Richard... although ultimately you only really get to play with their toys. It's not really fair to lay claim to them;)
4:50 PM

amok.leonard said…
Well I scored big brownie points when I got my missus her own power kite to fly ;)

I just have to avoid setting a precident since my toys are expensive.

MJenks said…
My parents were kind of like this. "Hey, I'd really like Castlevania 3" "Merry Christmas, here's a shirt. You'll look so nice in it."
6:35 PM

MJenks, judging by some of the comments I've been reading about the comic (here, on Facebook and over at LazyGamer.co.za) it seems like you guys can have it just as bad as us girls. Sensible presents for the loss!
12:55 PM