This week's profiled trailer comes from supernatural/sci-fi action comedy R.I.P.D, which can probably best be described as the hybrid offspring of Men In Black and Hellboy. In fact, just like those 2 films, this one is loosely based on a comic book series as well.


When they die in the line of duty, the world's best lawmen are recruited for the Rest In Peace Division, a group of undead enforcers who protect the world of the living from demons and other afterlife trouble-makers. Ryan Reynolds is a promising young police officer who becomes the latest rather unwilling R.I.P.D. inductee. He's in turn paired with Jeff Bridges's flamboyant cowboy ghost. From the director of RED,  the film also stars Mary-Louise Parker and Kevin Bacon. 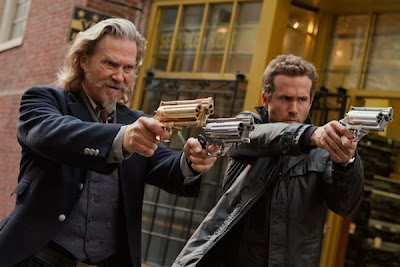 It's honestly going to be very tough for R.I.P.D. to escape the MIB and BPRD comparisons. However, despite the blatant similarities - even the demons look more like aliens - I'm certainly game. I'm sure R.I.P.D. won't revolutionise the future of cinema but it does look like fun, with a very strong pairing of leading men who definitely won't be taking things too seriously.