- May 02, 2012
At what point do you stop fighting and accept what Fate, or God, has intended for your end? It’s strange to find such a heady question in a film where the hero straps shattered bottles to his fists before charging a wolf that puts The NeverEnding Story’s Gmork to shame. But that’s the unusual nature of The Grey, a gritty survival thriller that alternates action and philosophy for an exhilarating adventure that’s more cerebral – and severe – than most. 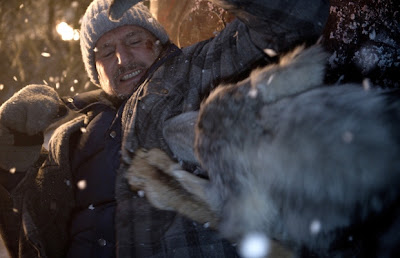 The Grey centres on John Ottway (Liam Neeson), a sharpshooter hired to protect oil workers from animal attacks in frozen Alaska. His beloved wife has left him and he’s on the brink of suicide… but then his returning flight to civilisation crashes in the wilderness. Miraculously John is one of the only 7 survivors, but the situation is more complicated than simply holing up and waiting for rescue. The plane crash has dumped the men inside the territory of a wolf pack that views the humans as a threat. Suddenly it’s a case of kill or be killed, with the survivors facing the additional threats of the merciless Northern Winter, and dissention within their own “pack,” as loudmouth rebel Diaz (Frank Grillo) challenges John’s “Alpha” position.

The Grey’s pacing is like an ECG heart monitor, continually spiking and stabilising. The dramatic spikes are the action scenes and the straight lines the quieter, contemplative scenes typically devoted to character development. For a movie that pretty much follows the “band of men picked off one by one” narrative formula, The Grey actually lets you learn more about the survivors. They’re not fleshed out completely (Dallas Roberts's perceptive Hendrick could have done with more back-story) but they nonetheless feel like real people instead of scripted types – with posturing Diaz the only exception. The men of The Grey have families at home, and dreams, and they respond with obvious grief to the loss of their friends. Muscle-flexing, fearless machismo has no place in this film. Even Neeson adds a hefty chunk of vulnerability to his usual sombre, unassuming but still deadly action hero persona. 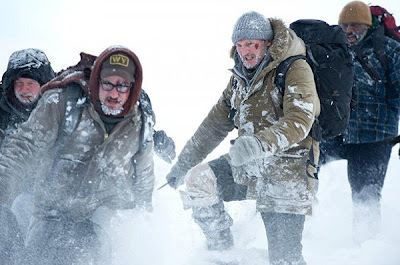 The best thing about The Grey is its immersive surges of action, which frequently race out of nowhere just like the attacking wolves. The “subjective” shaky cam cinematography style is very well utilised here, plunging the viewer right into characters’ heart-stopping, but still believable, situation. The plane crash and treetop traverse are especial highlights. And overall, the result is one of the most involving, truly edge-of-your-seat films you’re likely to watch.

As already mentioned, The Grey is a highly sober film, perhaps more so than audiences would expect from the same directing and producing team responsible for the consciously overblown silliness of The A-Team film (my review). This said, The Grey’s seriousness didn’t seem to detract from viewers’ enjoyment at the screening I attended. What the audience did sound audibly disappointed about though was the film’s ending. No spoilers, but some may consider the climax to be an abrupt cop-out. Personally though I felt its ambiguity fitted with the film’s tone. And on that note, make sure to stay in your seat for a brief post-credits sequence that provides a tad more resolution. 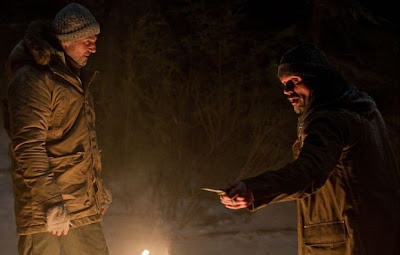 In the end, The Grey is a rewarding actioner for thinking adults – a survival adventure with the similarly poignant self-evaluation and striking cinematography of 127 Hours (my review), but without its genre predecessor’s queasy gore. Recommended. 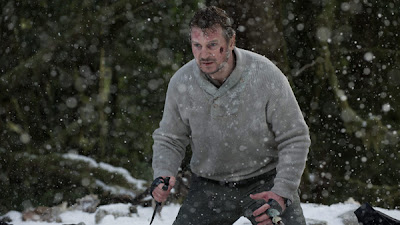