Girlz ‘N’ Games #80 is the second of this comic’s own little Millennium Trilogy – based on Stieg Larsson’s bestselling books, as well as their Swedish film adaptations.

This new strip follows on from The Girl Who Toyed With Lesbians, here, and basically gives Larsson’s work the video game treatment. Just what would a Girl with the Dragon Tattoo game be like… apart from motorcycle chase sequences and hacking mini-games? At the same time, I couldn’t resist highlighting the weird similarities between troubled series heroine Lisbeth Salander (Noomi Rapace in the movies) and The Bride (Uma Thurman), from Tarantino's Kill Bill.

You’ll have to wait until early January for the concluding instalment in the Girlz ‘N’ Games Millennium Trilogy. Before that though there will be a special Christmas strip next week, just in time for the 25th. Enjoy! 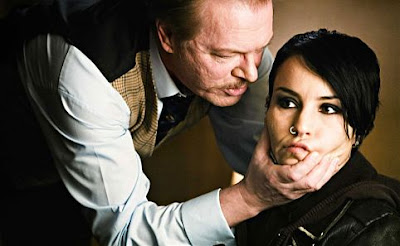 If this doesn't suit you, you can also follow me on Twitter - I tend to tweet when a comic is in production, as well as provide a heads up when it's about to debut online.
Books and comics Film Fun Gaming

Anonymous said…
Hi pfangirl, I've just come across your blog after doing a google search for all things Pfeiffer.
I really miss your Noelle's Michelle Pfeiffer web page but now I can see what you've been busy with in the intervening years, your blog is superb.
It's a shame theres so little Pfeiffer related stuff to blog about nowadays but I have tried to cover some of her older films on my blog over the last few months.
I don't know how much longer I'll carry it on but I'll definitely drop by your blog again and I'll be joining the Facebook group.
See you later !
11:23 PM

Pfangirl said…
Hi Paul, thanks for taking the time to comment. And thanks for the kind words about this blog:)

I understand your problem exactly. It's one of the reasons I stopped working on my Pfeiffer site - once Michelle entered semi-retirement, it became difficult to stay motivated, find interesting news and continue writing about her and her projects. I ended up just moving onto other interests, although I obviously remain a pfan.

Good luck with your blogging, and see you around online!:)
4:05 PM