Every time a popular new superhero film comes out, geek debate flares. Is the film true to the comic book source material? Is the film better than other entries in the genre - or series, if the movie is a sequel? Is the superhero at the centre of the new film cooler/better/stronger than other tights-and-mask-wearing avengers?

Because most people have short memories, normally it's the superhero star of the just released film that scores the most votes in online polls asking the very questions mentioned above.

Anyway, if there's one thing that can be said about comic book enthusiasts and pop culture geeks, it's that they love a passionate, well-substantiated debate about fantasy hypotheticals. In fact, I'd say they love it as much as rolling their eyes at "uncool" Twihards for engaging in much the same behaviour. I know sometimes it's irresistible to tease the Twi's - especially when they do stuff like this - but come on, guys, they're just a different breed of geek.

So, yeah, my new Girlz 'N' Games comic is gently poking fun at hypocrit geeks. And for the record, the strip is based on a true story - and actual arguments I've encountered online since the release of Iron Man 2. I'm actually quite proud of this comic in terms of how the regular cast came out. Their facial expressions; their outfits; the consistency of their looks etc. appear in the finished drawing exactly like I envisioned in my mind... which as any artist will tell you is definitely not a given when you put pencil to paper. 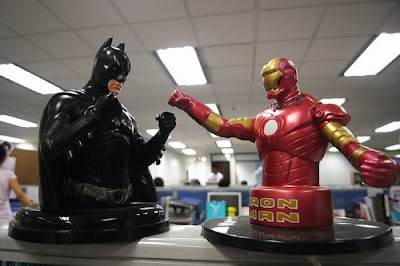 As for the Batman Vs. Iron Man debate, GO TEAM BATMAN! Erin's argument above is the exact one I've been using - which does kind of make sense seeing as she is based on me.

Anyway, a comparison between DC's Bruce Wayne and Marvel's Tony Stark is inevitable. Both heroes are vulnerable human beings without superpowers, both are billionaires (heading arms development companies) and both have some of the coolest techno-toys in comicdom at their disposal.

Still though, I think that in a fight, Batman would have the upper hand. As the world's greatest detective and an accomplished, highly trained hand-to-hand combatant, he is not nearly as reliant on technology as Iron Man. Batman is also mentally far more focused than Iron Man. As Bruce Wayne he has adopted the persona of an alcoholic playboy. Meanwhile, Tony Stark IS an alcoholic playboy. Also, along with his psychological vulnerabilities, Tony Stark has a particularly large and obvious physical weakness - the arc reactor in his chest. Batman need only distract Iron Man with a bottle of Jack Daniels, yank out the magnet thing protecting his heart (and powering his suit) and it would be game over for Mr Stark. Add to the mix the fact that Batman sometimes has his own powered exoskeleton suit (plenty of interesting armoured Bat pics here), and well, I think it's obvious who the winner in a Batman-Iron Man face off would be...

And if you think otherwise, you're a dumbass! ;) 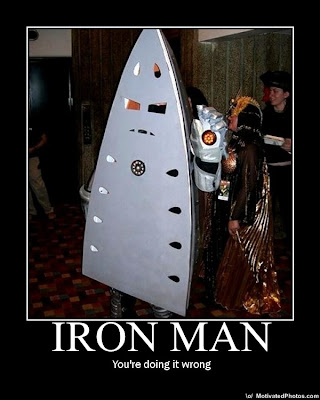 MJenks said…
I'd pull for Batman, too, but didn't Batman exploit Superman's weakness to kryptonite each time he defeated him?

Does Stark have a kryptonite? Aside from acid rain?
2:41 PM

Gareth said…
Don't really agree that Twihards are just another brand of geek.

In the same way that is a difference between being a fan of a band's music, sticking their posters on you walls, and someone who has posters of the lead singer of that band plastered on their wall and who stares dreamily at him every day.

Then again, there may not be a difference in the mushy female mind :P
8:10 AM

Pfangirl said…
MJenks, I actually don't know if Batman has always used kryptonite to defeat Superman. He may have concocted some "red sun" ray generator as well, although I can't confirm. As for Stark's "kryptonite", how about a bottle of Johnnie Walker, a pretty girl and that big bloody magnet by his heart?

I disagree, Gareth. How many geek guys have sat seriously lusting over Princess Leia in her slave girl outfit? It's the same thing. These 2 groups are admittedly on the extreme side of geekdom in terms of their passion levels but they're cut from the same cloth, despite one being male and the other female.
12:12 PM

Gareth said…
Lust is purely superficial though, appreciation of form. I could understand if the girls were simply oggling ripped vampire/werewolf abs, but I think it goes further than that in many cases into a sort of dreamy, teenage crush on the characters themselves.