Seeing as the Easter long weekend was rather craptacular in terms of new movie releases, and I had otherwise seen everything I was keen for at the cinema, my film viewing Friday to Monday was of the DVD and "finally on TV" variety.

I had been meaning to watch The Spirit for ages. Based on the groundbreaking Golden Age genre-blending comic, The Spirit is the directorial debut of comic book writer and artist Frank Miller, the man responsible for The Dark Knight Returns, Sin City and 300 among other projects. The Spirit was panned on release, and I was always worried it was just going to be a Sin City knock-off, but I was actually pleasantly surprised.

I'm not denying that The Spirit is a heavily flawed love-it-or-hate-it film, but I must confess I found it quite charming. Samuel L. Jackson was uncomfortably over the top as the villainous, egg-hating (?!) crime lord, the Octopus, but the film is a campy mix of noir, romance, action-adventure, superheroic fantasy and even a bit of Greek mythology. Tonally it takes some getting used to but I think I enjoyed it more than that other "weird" pulp period homage, Sky Captain and the World of Tomorrow.

I was especially amused that The Spirit is the Joey Tribbiani of masked heroes. Literally he'll be talking to a woman - the film's curvy female cast includes Scarlett Johansson and Eva Mendes - and start flirting over her shoulder as another woman walks past. Although, I must say that Gabriel Macht, an unknown as far as I'm concerned, is damn sexy in the film in a clean cut Jamie "Apollo" Bamber kind of way. (See The Spirit all buff & shirtless here).

On Saturday night I finally got around to revisiting Robin Hood: Prince of Thieves in preparation for Ridley Scott and Russell Crowe's film in a few months' time. A few things struck me while watching this fun romantic adventure.

1) The rousing Robin Hood main theme is still used is a backing track for many movie montages.

2) 20 years ago Morgan Freeman was still the wise sidekick to the hero... except 20 years ago Freeman wasn't simply the kindly old man in the background. He was a badass warrior, swinging a scimitar.

3) He's been playing slimy, sneering Severus Snape for so long now - 9 years in fact - that it's easy to forget that once upon a time Alan Rickman was not so restrained when it came to embodying villainy. He dominates Robin Hood: Prince of Thieves. And in the Extended Cut, which is what I was watching, pretty much all the extra scenes are of him hanging out with his witch adviser, berating his scribe and dealing with his fellow devil-worshiping barons.

Guy of Gisborne: Why a spoon, cousin? Why not an axe?
Sheriff of Nottingham: Because it's DULL, you twit. It'll hurt more. 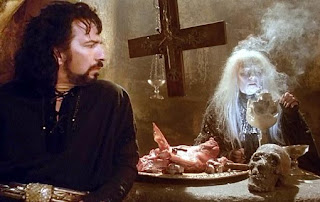 Something, Something... covers the events of The Empire Strikes Back, just as Blue Harvest tackled A New Hope. I actually can't remember Blue Harvest well enough to properly decide whether Something, Something is funnier... but this newer special hour-long episode of the TV show certainly has many laugh out loud moments. My personal favourites tended to be the lines that point out the many inconsistencies and bizarre logic of the Star Wars universe. E.g. On Hoth: "I like how all these electrical cables are just nailed to the ice; that's probably safe."

Of course, it's worth pointing out that to really enjoy Something, Something... you need to be both a Star Wars enthusiast AND Family Guy fan. The one won't do without the other here; otherwise you'll miss out on a lot of the jokes and visual gags. 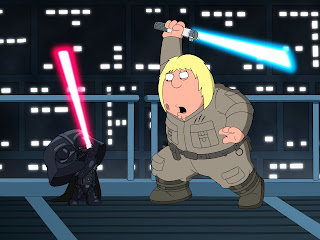 Reading-wise, this last weekend I finished the second of the Sookie Stackhouse supernatural mystery books, entitled Living Dead in Dallas, by Charlaine Harris. Living Dead in Dallas is, of course, the basis for the Season 2 storyline of everyone's favourite smutty vampire TV series, True Blood.

This said, it's early on in Living Dead in Dallas that the novel and TV show start parting ways. Many of the book's fundamental elements have carried through to the small screen - an orgy-loving maenad, the vampire hating church known as The Fellowship of the Sun, tattooed vampire Godric, a boozed up Andy Bellefleur and much more. However, without resorting to too many spoilers, there are a helluva lot of changes as well. The TV show has pumped up the roles of several minor characters in the book, kept a few popular figures alive (who were killed off in the novel) and even introduced one completely new vampire.

Not that any of this is really a problem. The novel and TV series can easily exist as separate entities, growing bit by bit apart. Although, I must admit at this point that I did prefer True Blood Season 2 to its literary source material.

I'm now a few chapters into Club Dead, the third Sookie Stackhouse book (there are 9 in the series so far), and I'm actually really enjoying not knowing what is going to happen; getting ahead of True Blood S3.

It's taken me quite some time, but I finally finished watching Battlestar Galactica on Good Friday. Four seasons of viewing later and I was at the double-length finale of one of the finest television shows of the last decade, or, arguably, of all time. Forget that it's technically sci-fi, which can easily put off a lot of potential viewers. BG is masterful television: well written, thematically dense, and packed with complex characters the audience really cares about. I know people were divided by the events of the final episode but its multiple character partings repeatedly had me in tears. And I have high praise for anything that can turn me into an emotional ragdoll like that.

Battlestar Galactica is definitely one to add to the "TV series on DVD" collection. 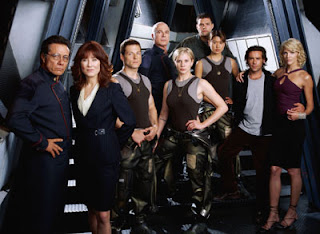 I always kind of secretly scoffed at hardcore World of WarCraft players who sit discussing step-by-step combat strategies, and analysing printed stats of the Raid boss they're about to tackle. This week I have joined these hopeless geeks... not in WOW, because I'm on a break from the game, but rather in terms of my 3 year Dungeons & Dragons pen-and-paper role-playing campaign. There has been quite a lot of discussion via email this week among the players.

You see, tonight the final battle kicks off, and it's do or die time for our band of 3 very disparate heroes: Herkon the Paladin, Micha the Battlemage and Kalanae the Rogue-ranger. We squeezed in 2 role-playing sessions during the Easter long weekend to get us to this point in the campaign. On Monday we defeated an Ash Dragon, followed by a hideous Angel of Decay as we strove to make contact with the king of the blue dragons. As it turns out Nymphain the Blue Dragon was lying dead on his treasure hoard, and the news of this brought his kin to our side. Now we and our allies - including the most powerful mages from the 4 magical orders - wait in 'our' town of Confluence for the arrival of dark god Veccna, the mind-controlled dragon lich Misherak, and a massive force of undead soldiers (many of whom are corrupted celestials). We're talking about a battle at Lord of the Rings levels of epicness here, people.

Please hold thumbs that it goes well for us... 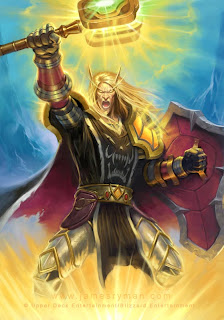