Originally posted on my web comic, Girlz 'N' Games.
The Justice League are back... in a strip that could also be called the Justice Out of Your League!

So by now most of you will be aware of the latest attention-grabbing stunt direction-change happening at DC Comics as part of their New 52 universe overhaul. Human partners are out and superhero hook-ups are in! Dumping those too-vulnerable mortals, Superman and Wonder Woman are the new bulletproof power couple – beginning their union officially in Justice League #12 with some skybound make-out and bondage sessions. Kinda. 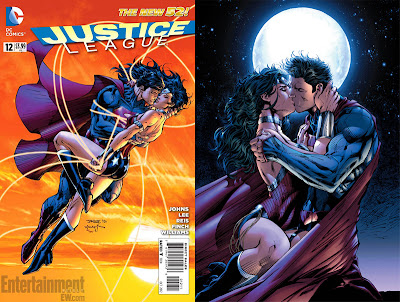 I’m still in 2 minds about the latest twist in the never-ending super soap opera. On the one hand there is definite dramatic potential to be mined. Wonder Woman and Superman may both be super-strong “aliens” in Man’s world, but Kal-El has at least been raised as a human with Midwestern values, whereas Diana is a complete outsider, entering society with unbridled Amazonian spirit. She’s a passionate warrior-diplomat who doesn’t pull her punches, whereas Superman is very specifically anti-hurting people. The clash, within a relationship, of such different beliefs and behaviours could be very interesting. But at the same time, I do wonder if Alan Moore and Dave Gibbons didn’t hit the nail on the head with this extract from classic Superman fantasy fulfilment tale, For the Man Who Has Everything? Pairing the most powerful man and woman in comics is a bit too obvious. 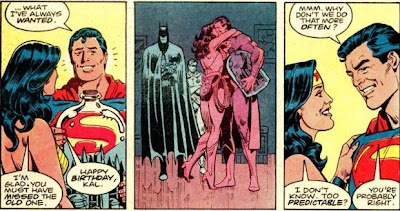 There’s no denying it. The union of Superman and Wonder Woman comes with a cost. Out the window goes the idea that these “gods” could find love with us mere squishy mortals.

For example, there’s Superman existence as a Christ archetype: despite being well aware of our sins and weaknesses, he loves us unconditionally and makes sacrifices to save us. His relationship with journalist Lois Lane nicely encapsulates this concept. Lois fawns over Supes when he’s in costume, but treats her colleague Clark Kent (Superman’s alter ego) like dirt. At worst she sneers at and abuses timid nobody Clark; at best she just ignores him. Superman sees Lois at her fickle worst, yet he still adores her.

Wonder Woman is in an even more complicated position relationship-wise. She’s always been far more powerful than her handful of human lovers – the most famous being pilot Steve Trevor. Gender issues come to the fore as Diana and her partner struggle to find a sweet spot in their relationship: where the expected gender roles aren’t simply flipped; where he doesn’t feel emasculated and she still needs him despite her own  strength and self-reliance.

Maybe that’s why I’ve always liked the speculated pairing of Wonder Woman and Batman, because it treads the tightrope of mutual respect and capability without losing the physically vulnerable human element. Certainly the duo’s evil counterparts worked well as a couple in Crisis in Two Earths.


But anyway, regardless of what happens with Superman and Wonder Woman’s relationship, the Justice League is sure to be shaken, and the couple’s fights – when they inevitably occur – are guaranteed to be spectacular.

For the record, you can read a fantastic article on the various kisses of Kal-El and Diana over the years right here at Comic Book Resources... with a similar article and more comic panels here.