- June 04, 2012
From Universal Pictures and toy makers Hasbro comes a big budget blockbuster based on a board game. With such a stupid concept what could possible go right? Well, a surprising amount actually. By no means is Battleship great, but as a popcorn flick – particularly when you enter the cinema with rock-bottom expectations – it delivers the crowd-pleasing goods. It’s silly but not overbearingly stupid. 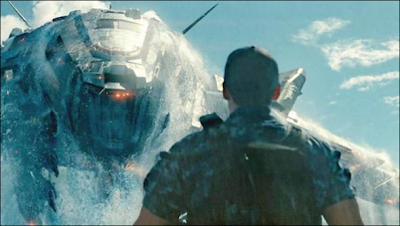 From Hancock and Friday Night Lights director Peter Berg, Battleship is closer to Independence Day and Pearl Harbour than Transformers (also from Hasbro), and about a hundred times better than the latter… mostly because it doesn’t feel like it’s targeted solely at 11 year old boys. There are a lot of laughs in Battleship – well, at least until the alien attack turns everything too serious – but it’s not Transformers’ juvenile “fast talking, clumsiness and body function” style of humour that the filmmakers go for.

For the record, the plot of Battleship centres on cocky, impulsive Alex Hopper (Taylor Kitsch) who, against the odds, has risen through the US Navy’s ranks due to the influence of his straight-laced older brother (Alexander Skarsgard) and supportive girlfriend (Brooklyn Decker). Meanwhile, six years after Earth’s scientists shot messages into deep space, aliens answer with the first wave of an invasion. While they consolidate their position and prepare to relay communications of their own, the ETs erect an impenetrable force field around the Hawaiian islands. Only Hopper and the crew of 3 destroyers are left inside the shielded zone and it’s up to them to stop the invaders before it’s too late. 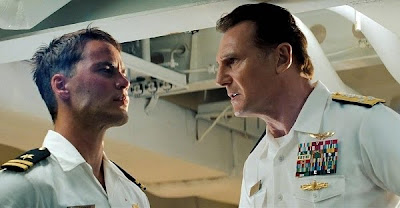 And that’s it, really. Battleship is a lot more self-contained and focused than you’d think, for better or worse. I admit I was looking forward to a massive battle with dozens of international navies collaborating to take out the aliens, but the action is localised and limited – with the exception of a few scenes depicting urban destruction on a 9/11 scale. The downside of this approach? Liam Neeson’s role as a gruff admiral is nothing more than a glorified cameo.

Speaking of performances, although characters are confined to cliché types, Battleship features a likeable cast, with real-life double amputee Gregory D. Gadson an especial standout in a role that would normally go to the likes of Ving Rhames. Rihanna, meanwhile, in her feature film debut, is certainly committed, and like the rest of the cast, she gets to temper her feistiness with believable moments of fear.

There are some nice touches in Battleship. The aliens are appreciably humanoid – making for a fairer movie fight than usual – and the sequences that replicate the random targeting of the Battleship game actually have a pleasing tension to them despite their contrived “hopping” spacecraft set-up. 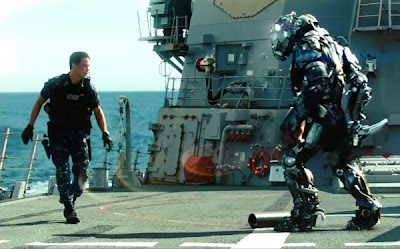 There are obvious weaknesses in Battleship as well, the chief of which are the lack of character development and a strong sense that quite a bit of footage ended up on the cutting room floor.

Still, it’s a pleasure to watch coherent battle scenes for a change – particularly those that (Michael Bay take note!) don’t maintain the same tedious pacing for 45 minutes straight. The final battleship vs. battleship confrontation is particularly well handled and by then I was fully rooting for the human underdogs.

Battleship certainly isn’t highbrow entertainment, but it’s also not just some Transformers clone, which is what the film’s marketing material would have you believe. I got through this one without developing a headache, rolling my eyes or zoning out once, and that was a very pleasant surprise. The biggest guilty pleasure of 2012 so far. 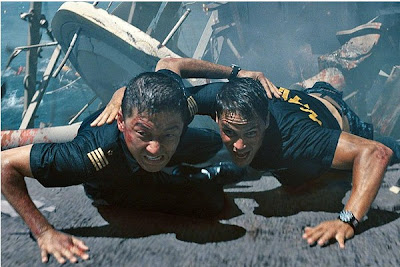