- March 22, 2012
Trying a little something different on the blog here, with my impressions of certain high profile board games that I’ve had the privilege to play ...

The best board game adaptations of pop culture properties capture the tone and energy of their source material. That’s certainly true for Fantasy Flight’s Battlestar Galactica: The Board Game, which has swiftly become my favourite tabletop game of the past 2 years. 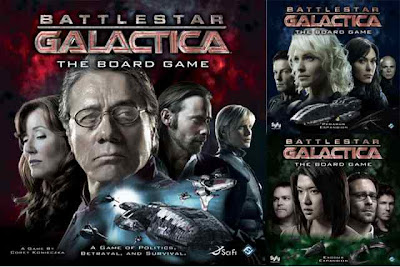 Battlestar Galactica may be a tad on the complex side for board gaming "noobs" whose only experience with the pastime is featherlight party games like 30 Seconds and Cranium, as well as simple throw-the-dice-and-move titles like Monopoly. However, Battlestar is one of those comfortable “learn as you play” games, and if at least one member of your gaming group is an experienced board gamer with a grasp of strategy – or, better yet, has played Battlestar before – play should proceed pretty smoothly.

Battlestar Galactica is a chiefly co-operative game for 3 to 6 players (ages 10+). Players pick fan-favourite characters from the sci-fi TV series, each of whom have different strengths and weaknesses and each of whom have a primary role (pilot, politician, military commander, engineer). As per the first season of the TV show, your goal, as the last remaining members of the human race, is to reach the planet of Kobol, from which the 13 tribes of humanity originated. Every turn during the game you hope for an icon that means you can teleport one step closer to Kobol. 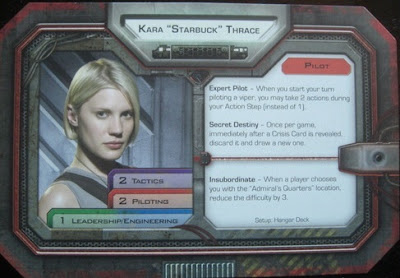 Of course, the reason military vessel Galactica is travelling through space with a fleet of civilian spaceships is because of the Cylons. Created by Man, the Cylons are sentient machines intent on exterminating the human race. During the game, Cylon base stars, raiders and heavy raiders are continually attacking Galactica and the civvie ships.

Of far greater concern though is the fact that typically during a game one or more of the players is secretly a “skinjob” – a Cylon who looks completely human. Twice during the game, players draw random Loyalty Cards which they keep hidden. These cards will determine whether the player is working to save Mankind, or undermine humanity’s efforts.

This is where the board game is massively enjoyable because players have to work out who, if any, is a Cylon traitor. There’s deceit, there’s accusation, there’s secret alliances and there are characters confined to the brig, from which they have to plead for release. Brig the wrong person at the wrong time (e.g. a pilot when the Cylons are staging a massive assault) and the human race is in deep trouble... which is exactly how the Cylons want things.

Cylon players have to walk a fine line of cunning: deflecting suspicion while subtly sabotaging and undermining trust. Humans win the game by reaching Kobol, but the Cylons win if any of the following happen:

1) Any of humanity’s resources (Fuel, Food, Morale, Population) hit zero.
2) A heavily armoured Cylon Centurion manages to board Galactica and advances unstopped for a certain period.
3) Galactica endures too much damage in combat and is destroyed.

Read the rulebook for Battlestar Galactica: The Board Game online here. 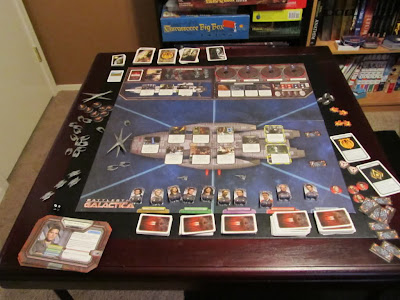 Mirroring the atmosphere of the TV series, Battlestar Galactica: The Board Game is a high stress game, with the players battling paranoia and growing despondency as their situation rarely improves. Every turn a random Crisis Card is drawn (e.g. a water shortage, riots, Baltar requesting 1 of your 2 nukes) and must be resolved. To resolve a crisis, players contribute from their hand of skill cards. Failure typically has debilitating consequences. No guesses as to what crisis outcome the Cylons want.

Each game of the basic Battlestar Galactica board game is different. Some may be combat-heavy; others may leave you with more breathing space to improve your odds of success through politics. If you are a fan of the 2004 TV series, the game is exceptionally fun to role-play. But even if you’re unfamiliar with the show, you may still find yourself unconsciously mimicking the behaviour of the various characters.

Battlestar is not a quick game, it’s important to note. Of course things can go horribly wrong – particularly if you have multiple Cylons on board from the game’s start – which will end a game quickly. However, for the most part budget 3 - 4 hours per game. For the record, the optimal number of players is 5, while 3 is definitely too few, sapping suspicion from the game and stretching players too thin to successfully ward off Cylon attacks... and stand a chance of victory.

There are 2 expansions currently available for Battlestar Galactica: The Board Game.

Pegasus introduces a second battleship (the Pegasus), and its ruthless human crew, as well as a Cylon Leader character option, and a new setting, in the form of unrest-riddled New Caprica.

The newer Exodus expansion, meanwhile, adds 3 significant new elements to the game, along with (like Pegasus) new skill cards, crises and playable characters. These new elements include:

1) The Cylon Fleet game board, which makes space combat a richer experience.
2) Conflicted Loyalties Cards, which contain goals and instructions for individual players, but also have horrible penalties for Mankind if revealed or left unaccomplished by the game's end.
3) The Ionian Nebula gameplay option, where you try to manage the attitudes of player characters and new non-player characters alike in response to trauma. This option also alters the end objective of the game.

You can choose to include all 3 elements in your game, or selectively integrate just one or two of them with the original gameplay. 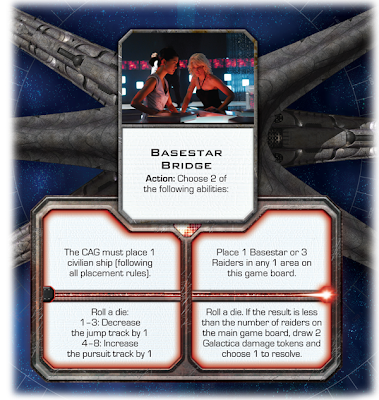 We didn’t have the courage to try the notoriously complicated Ionian Nebula during our first game with the Exodus expansion. And while Conflicted Loyalties didn’t noticeably affect play, the Cylon Fleet certainly proved to be an interesting, worthwhile addition… making some major improvements to the original game.

For the record, Exodus is supposed to make the game considerably more challenging for humanity. It certainly makes having a pilot in your party vital.

Crucially, the Cylon Fleet makes being a revealed Cylon or Cylon Sympathiser more fun by expanding the options available during the player’s turn. With the original game, once you are revealed as a Cylon, options to negatively affect the game are severely curtailed. For these revealed players, then, most of the game’s original enjoyment is lost. Exodus rectifies this failing of the original board game, making the expansion a highly recommended buy once you’ve got a grip on the basic game.

In South Africa, Battlestar Galactica and all its expansions are available for purchase online via Digital Sushi.
Gaming Television

Craig Lotter said…
But it's the "featherlight" boardgames that provide far more fun and laughs I find! :)
10:18 AM