- October 17, 2011
Relax, guys. This isn't going to become a regular week-starting feature on this blog. However, these fans snapped pics from the set of new Superman movie, The Man of Steel, were too delicious not to share. So I dub this "Manly Man Week" on Pfangirl Through the Looking Glass! 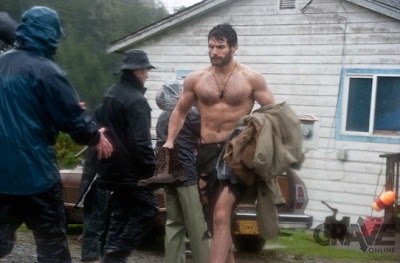 The full original set of images originally appeared over at CraveOnline, and depict Henry Cavill (AKA Stephenie Meyer's first choice Edward Cullen) as the world's most iconic superhero... at his most unusually hirsute. Especially when you consider the super-sleek looks, and baby bum smooth cheeks, of other cinematic Supermen Christopher Reeve and Brandon Routh.

Anyway, by the looks of things, in The Man of Steel, Superman AKA Kryptonian Kal-El, is attacked while keeping a low profile as Kansas farm boy Clark Kent. These behind-the-scenes snaps also satisfy the theory that we'll get to see an ultra-buff, bare chested Superman in the movie. But then I wouldn't expect less from 300 director Zack Snyder.

P.S. Cavill has seriously bulked up for the role.

For the record, I've written a pretty extensive post on The Man of Steel here, and posted some additional images here.

In terms of newer "reveals," the first images have surfaced on the Net of Russell Crowe as Superman's Kryptonian father Jor-El - a role made famous by Marlon Brando back in 1978. For the record Angels & Demons actress Ayelet Zorer has replaced Julia Ormond as Lara, Superman's biological mother.

Anyway, as you can see from the image below, in The Man of Steel - which is looking more and more like it's borrowed heavily from the Superman: Birthright comic miniseries - Superman's costume is more closely linked to the fashions of his home world. 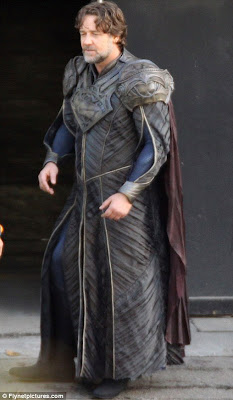 After originally being set to open at the end of 2012, The Man of Steel is now scheduled to release on 14 June 2013.
Books and comics Film