Time to Airbend some Resident Evil at SA cinemas this weekend

- September 10, 2010
Five new films open in South Africa today, and these include 2 movies with plenty of geek appeal. We'll get to those in a minute though once we've outlined the other flicks opening today.

First up is local teen comedy Bakgat! 2, an Afrikaans language tale that continues the adventures of dork-turned-rugby-star Wimpie Koekemoer (Ivan Botha) and his friends post-high school. This time Wimpie is wrestling with the decision to accept a rugby contract in England, which will take him away from his love, Katrien (Cherie van der Merwe). 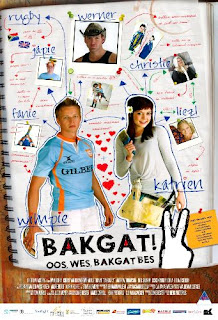 For lovers of Bollywood cinema meanwhile, there's Dabangg, a highly anticipated Hindi action film about a corrupt but fearless cop (Salman Khan) who lives life on his own terms, but comes to learn the importance of family - regardless of how dysfunctional it is.

Selected Ster Kinekor cinemas meanwhile are screening animated film The Living Forest for little kiddies. This Spanish production centres on a shy little mole who has to rescue his friends from greedy humans. The Living Forest is actually 9 years old, but it did win a handful of animation awards around the time of its original release - so here's hoping it's better than last year's horribly childish, and also Spanish-made, The Missing Lynx.

As for movies with geek appeal, my 2 viewing picks of the week are as follows:

Resident Evil: Afterlife is the fourth film in the most successful film series based on a video game franchise - although the connection between the 2 pop culture entities has grown increasingly tenuous over the years.

The writer and producer of all 4 Resident Evil films, Paul W. S. Anderson returns to direct this entry in the movie franchise - having previously only helmed the first Resident Evil. Milla Jovovich is back as genetically enhanced heroine Alice, as is Ali Larter as Claire Renfield and Sienna Guillory as Jill Valentine. Prison Break's Wentworth Miller meanwhile joins the cast as Chris Renfield, a reoccurring hero in the video games.

The Resident Evil films have never been plot-heavy, but for the record Afterlife sees Alice heading to Los Angeles as she attempts to find survivors of the catastrophic zombie plague, At the same time she seizes the opportunity to take down the sinister Umbrella Corporation - which has been using the apocalypse to its financial advantage.

Honestly though, the big draw of Resident Evil: Afterlife is that it's the first 3D film in the franchise. This said, it's important to note that Afterlife has been shot in 3D (NOT converted) using the same high definition digital camera system James Cameron developed for Avatar. I refuse to watch shoddy 3D conversions, but movies made with the format specifically in mind tend to be very visually impressive, if nothing else.

Resident Evil: Afterlife apparently hasn't been pre-screened for critics, given that the film is still sitting without a rating score on review aggregator site Rotten Tomatoes (the movie opens in the US today as well). This isn't a good sign in regards to the film's quality, but it's also no real big surprise for video game adaptations - which are traditionally mediocre to crap. I also don't know how accessible the film will be for anyone who hasn't watched the other Resident Evil films, but damn, the trailer makes the film look stylish if substance-less. Then again, it's possible I'm being emotionally swayed by the A Perfect Circle track used in the preview.

The Last Airbender is a live-action film adaptation of the 2005-2008 Nickelodeon animated series, beloved among children and adults alike. I've blogged a little before about the film, the TV show and the movie trailer, but what you need to know is that this family fantasy film is set in an Eastern-style world divided between 4 kingdoms: the Water Tribes, the Earth Kingdom, the Air Nomads, and the Fire Nation. In each kingdom live magically gifted people who can control or "bend" the element their people are associated with. And in every generation there is one bender who is the Avatar, with the ability to control all 4 elements and draw upon the combined knowledge of all previous Avatar incarnations.

12 year old Airbender Aang (Noah Ringer) is the current Avatar, but he's been frozen in ice for a century - until being discovered by teenage Waterbender Katara (Nicola Peltz) and her brother Sokka (Jackson Rathbone). Despite his youth and need to master the other elements, a massive responsibility falls on Aang's shoulders: to restore peace to the world, which has been ripped asunder by the fearsome Fire Nation.

By all accounts you're probably better seeking out the animated series than watching this film - which is screening in conventional format and converted 3D. Adapted and directed by M. Night Shyamalan, who was also of course also responsible for The Sixth Sense, The Village and The Happening, The Last Airbender is just 7% Fresh on Rotten Tomatoes. Now I'm aware that critics love to gleefully slam anything Shyamalan does, but at the same time, when trawling through the reviews - moderate and extreme - the consensus still comes through that The Last Airbender is a disappointment. Wooden performances, clunky exposition and general dullness sink the project. Worst of all, the cartoon's infectious glee and sense of humour have been sucked from the big screen adaptation, leaving proceedings generic and joyless.

Having been very impressed by the animated series, I am still curious to watch The Last Airbender. However, my viewing is definitely going to be on a budget movie night and definitely in cheaper 2D. If you're similarly keen to watch the film, I advise you to do something similar.

Pfangirl said…
Thanks for the review link, Amaresh:)
4:33 PM