There's not much to explain about this new, straightforward Girlz 'N' Games comic. Basically it's a bit of commentary about the backlash that highly successful, female-orientated entertainment is often subjected to.

These days the 2 pop culture femme franchises that provoke the strongest reaction are Twilight and Sex & The City. Having both originated on the printed page, these series leaped to the big screen as massive commercial hits. In 2010, movie sequels for both will be, or have already been, released.

Now I'm not saying that either Twilight or Sex & The City are outstanding (although I was a huge fan of the excellent S&TC TV series). They're average to bad cultural products in fact. I'm just disturbed by the amount of vitriol splashed in their direction. Sometimes it's pure, rabid hate. And come on, are they really any dumber than "guy" franchises like The Fast & The Furious?

What are people, particularly guys, so upset - or insecure - about that they have to shred them? Is it because both Twilight and Sex & The City are entertainment specifically designed for women (and gay men in the latter's case)? To me the reaction looks just like the usual dismissal of "inferior amusements for women." It's like the longstanding nose thumbing that hardcore gamers give to The Sims. Lots of girls and women love it, so therefore it is beneath the guys.

Perhaps someone out there has the answer for me? 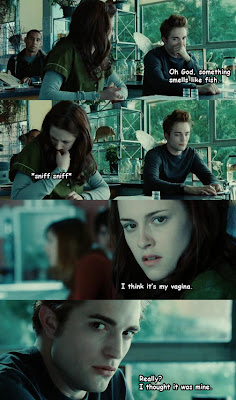 Anyway, as a sidenote, I was very happy about how the Edward Cullen (Robert Pattinson) and Carrie Bradshaw (Sarah Jessica Parker) caricatures came out in my new comic. Oh, and although #69 is more film-centric strip than a gaming focused one, I did include a small gaming reference in the last panel. I'm sure many of you will be able to identify it though.

If this doesn't suit you, you can also follow me on Twitter - I tend to tweet when a comic is in production, as well as provide a heads up when it's about to debut online.
Books and comics Film Fun Gaming Television

MJenks said…
I think your version of Sarah Jessica Parker looks much better than the real version.

Like I said on the group site, I rag on Twilight because it's a terrible story. I'm strangely ambivalent and apathetic toward Sex in the City.
4:22 PM

Pfangirl said…
Hehe:) Thanks for commenting, MJenks. Great to hear your explanation. I do think Twilight does still top Sex & The City in terms of the hatred directed towards it.
3:38 PM

Gareth said…
I've yet to see much actual hatred, more eye-rolling, scorn or mockery. Which I see (and have personally) directed toward The Fast and the Furious, too, if not to as great a degree. It's more of a mockery of the fans and how worked up they get (SQUEEEEEEEE) over something so (as you said) average to just plain bad. Men rarely get that worked up by things that aren't sport. Or at least I haven't seen fans of F&F displaying the kind of reaction Twilight gets.

It's like how girls used to scream and faint around the Beatles. Don't remember any reports of guys being quite so crazy in quite such numbers hey.

(Personally, I direct the same scorn to people who get that emotional about sport. OMG, a bunch of sweaty men kicked a ball into a net, let me act as if Angelina Jolie just gave me a BJ!!! Hooray, I can experience excitement and elation by living vicariously through my heroes!)
6:55 PM