- November 27, 2009
As the holiday season quickly approaches, 6 new films open in South Africa today, offering a little something for everyone - from the kiddies to the lovestruck tweens; from the baby boomers to the cultural elitists.

The obvious first pick for the week is fantasy romance The Twilight Saga: New Moon, although I'm sure by now all the local hardcore fans have already been to at least one of the almost daily preview screenings that kicked off last Friday.

What you need to know about this adaptation of Stephenie Meyer's bestselling novel is that it ups the stakes (hah!) in teenager Bella Swann's (Kristen Stewart) relationship with vampire Edward Cullen (Robert Pattinson), and introduces a romantic complication in the form of buff werewolf Jacob Black (Taylor Lautner). The film also flaunts its larger budget with location work in Italy, and increases the Twilight series' star power with Michael Sheen, Dakota Fanning and a bunch of up-and-coming teenage actors joining the cast.

The Twilight Saga: New Moon is currently shattering box office records left, right and centre. Obviously it's pleasing a lot of teenage girls, and older women with romantic yearnings, but judging by the film's 30% Fresh rating at Rotten Tomatoes it's more for the passionate Twilight-initiated than casual viewers. That applies specially for straight males.

My second pick of the week is Cheri. Now I'm sure many of you reading this have never heard of the film, and are unlikely to seek it out (as it's showing in limited release) but I'm in the mood to celebrate the return of Michelle Pfeiffer to the historical romance genre where she has always demonstrated her acting chops to much praise (e.g. Dangerous Liaisons, The Age of Innocence). In fact it's worth noting that Cheri reunites Pfeiffer with her acclaimed Liaisons director and screenwriter, Stephen Frears and Christopher Hampton respectively. Pfans are mildly hopeful that this previously winning combination will finally land Michelle her long-overdue Oscar.

Anyway, Cheri is based on the 1920 novel by French author Colette, and focuses on an ageing French courtesan (Pfeiffer) who begins an affair with the much younger son (Rupert Friend) of a rival (Kathy Bates) in 1900's Paris. What starts as casual sex and companionship develops into love, which is in turn complicated when the young man, Cheri is forced into an arranged marriage.

The film Cheri is apparently quite lightweight; more charming and witty than heavy and melodramatic (think last year's The Duchess). It's strengths are its performances while the credibility of the romance, as well as the plot, apparently let the movie down. Cheri is 54% Fresh at Rotten Tomatoes. 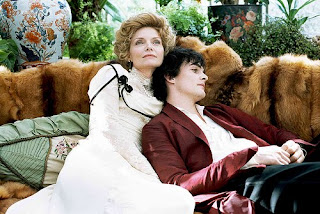 Other films opening this weekend are:

Old Dogs - Sure to be a hit is this comedy starring John Travolta, Robin Williams, Seth Green and Bernie Mac. Probably easiest to describe as a pseudo-sequel to Wild Hogs, Dogs centres on 2 self absorbed middle-aged men who learn the importance of family when the one discovers he has 7 year old twins. A pitiful 8% on Rotten Tomatoes!

De Dana Dan - Bollywood comedy starring Akshay Kumar, Katrina Kaif and Sunil Shetty. The film centres on broke best friends who embark on an audacious get-rich-quick scheme after their girlfriends give them an ultimatum regarding their financial situation. Cue misunderstandings, kidnapped dogs, dead bodies and an assortment of weird and wonderful characters.

Aida - Recording of the celebrated opera, starring soprano Violeta Urmana, as well as Marco Spotti and Ildiko Komlosi. Written by Verdi, Aida examines love, war and political intrigue against the backdrop of Ancient Egypt. Screening at Ster Kinekor Cinema Nouveau cinemas for a limited time only.

Garfield's Pet Force - CGI-animated movie for the kids starring that lasagna-loving fat cat. This time Garfield, Odie, Nermal and Arlene are transformed into superheroes. This was actually written by Garfield creator Jim Davis, who clearly has forgotten the simple formula that made his beloved character so popular in the first place. 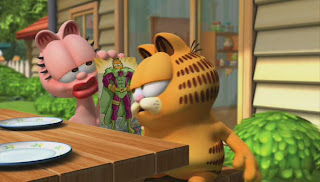