- September 10, 2009
It’s a shame that the recent Durban run of theatrical comedy Noises Off will probably be best remembered for its “obscene” posters, and the scandal they generated, rather than the fact that the production is one of the funniest and frenzied to hit the city’s theatres in a long time. 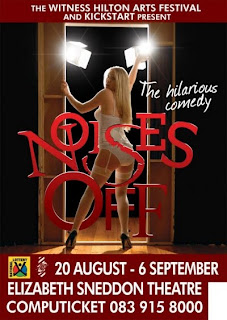 A farce about putting on a farce, Noises Off is written by British playwright Michael Frayn and focuses on a touring theatre company whose new show, the terribly cheesy (and sardine-saturated) Nothing On, is a disaster from the get-go. From the rehearsal stage to the concluding performance things go from bad to worse, particularly as the troupe’s relationships disintegrate behind the scenes.

For those unfamiliar with theatrical farces, think Fawlty Towers – ridiculous situations complicated by mistakes, misconceptions and missed opportunities to resolve the situation (and restore normality), all of which leave the main characters constantly teetering on the brink of a nervous breakdown. Typically the cast of a farce run around breathlessly, slamming doors, falling down stairs and losing clothing, and Noises Off is no exception.

This said, Noises Off has a surprisingly complex, and mentally gratifying, structure which serves to enhance the humour. Staged in Durban by the KickstArt theatre company, the play is divided into three Acts, each of which show the same opening scene of Nothing On, but from three different, increasingly comical perspectives. The first Act centres on an error-riddled dress rehearsal, the second Act focuses on a mid-tour matinee performance but flips the scene to reveal the chaos and confusion backstage, and the third Act returns the action to the curtain front, for a final performance in which the cast is completely burnt out, and everything that can possibly go wrong does.

For the audience most of the fun comes from recognising the differences between what should be happening on the Nothing On stage and what the characters are forced to ad-lib in an attempt to salvage the production. And as Noises Off progresses the humour becomes more physical and enjoyably exhausting to watch.

Noises Off is clearly very demanding of its performers, in terms of stamina, timing and general comedic skills. This is especially true in the backstage-set second Act, where the frenzy is so intricately choreographed it really requires a second viewing to fully appreciate its complexity. So kudos to the talented KickstArt ensemble – and the other top-notch local performers who join them – for their work here! 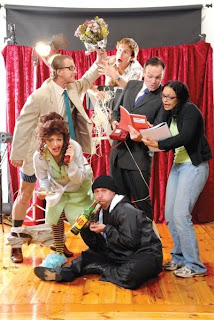 Speaking of performances, it’s actually very difficult to single out one actor as everyone does a fantastic job with their very different roles. Sticking to types rather than realistically developed characters, Noises Off features the expected theatre figures: the elitist director who would rather be working on a highbrow Shakespearean production, an overtired, overstressed backstage crew and an acting ensemble that consists of assorted idiots, busybodies and acting veterans who have had their memories scrambled by years of alcoholism.

As I said it’s difficult to elevate one performance above the others, but personally I particularly enjoyed the trio of actresses portraying the leading ladies of Nothing On. This includes Lisa Bobbert’s highly enjoyable take on a dotty, ageing star, whose decades of performing have left her completely disorientated when it comes to props and stage direction. Liesl Coppin is also a great deal of fun as an actress always knee-deep in everyone else’s business, but as a dedicated professional will do anything to keep the show going – even if it means some exceptionally hammy improvisation. Finally there’s scene stealing Roxy Nel as a blonde bimbo ingénue prone to tantrums and losing her contact lenses. Completely incapable of ad-lib, her insistent sticking to the script, regardless of what is going on around her, provides some of the biggest laughs of the final Act.

If I have any complaints about Noises Off it’s that I would have liked some actual resolution in the final Act, particularly since several interesting story arcs are unveiled earlier on in the play. But such is the way of farces I suppose, and the gripe is only a moderate one relating to the script.

Noises Off is a lot of fun, and is especially enjoyable if you have ever been involved in a theatre production, or worked with creatives in any form (writers, actors, designers). You will easily be able to identify with the Nothing On troupe and the situations in which they find themselves, from the fact that they become a pseudo-family unit always in each other’s faces to the bickering, boozing, “incestuous” relationships and the inevitable clashing of egos that occur. I certainly received a warm feeling of recognition watching the play.

Noises Off has just completed its 20 August – 6 September run at the Elizabeth Sneddon Theatre in Durban. Fortunately Durbanites and other KwaZulu-Natal theatre lovers who missed the play during its two-and-a-half week run have one last chance to see it. Noises Off will be opening the Witness Hilton Arts Festival on the weekend of 19 – 20 September. Catch it if you can!