I had the idea for this Girlz 'N Games comic all the way back in May when the very mediocre X-Men Origins: Wolverine hit cinemas. I didn't have time to sketch it then, but the release of the DVD this past week or so gave me the motivation to get it up once and for all, lest the strip miss its period of relevance and end up in my rather bloated Unused & Outdated Comic Ideas folder.

Anyway, when it comes to that all-important question "If you could have any superhero power, what would it be?" I've never been able to single out just one special ability. However, every time I think about Wolverine's Adamantium claws, I fantasize about the various uses I could put such indestructible retractable blades to. Even if I didn't actually use the claws for slicing and dicing, I could see their use when it comes to settling disputes through simple physical intimidation. Just shoot those babies out during a road rage incident, or when some schmuck is answering their cellphone or texting on it at the cinema, and, well, problem solved.

Moments like the one depicted in this comic would make the agonising Adamantium bonding process completely worthwhile. I think I'd try it even without super-fast healing.

As a sidenote, Wolverine and X-Men purists may notice that I have borrowed a few key details from decades of Logan lore: the "Snikt" noise that has traditionally been associated with Wolverine extending his claws, and the fact that his claws seem to be completely blood repellent (well, at least in PG-13 movies). 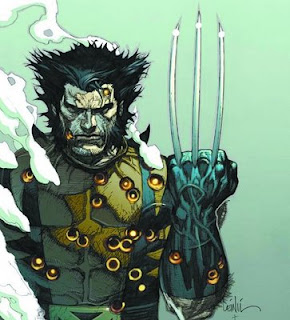 As usual, if you like my latest Girlz 'N' Games comic, please forward it on to your like-minded friends. You can also show your support by joining the Girlz 'N' Games Facebook group, which is open to all. The big advantage of joining is that you'll immediately receive an email notification every time a new comic is uploaded.

If this doesn't suit you, you can also follow me on Twitter - I tend to tweet when a comic is in production, as well as provide a heads up when it's about to debut online.
Film Fun

MJenks said…
Yeah, I always want the claws just for sheer intimidation. The healing factor that comes along with them would be nice, too.

I always fantasized about using them to open pesky bottles and such. I never really thought about punishing movie talkers. But, now I will.

Pfangirl said…
Thanks for the comment, Mjenks. Yeah, I think super healing would be awesome - there's no use having some super powers if you're so fragile you'll likely get hurt just using them.

I think I would probably most use the claws as a pedestrian who is rarely given right of way by motorists. A quick punch through the car's hood or a leisurely scrape across the paintwork would be a nice reminder of road rules.
11:44 AM