- April 29, 2009
I promise I'll get back to proper entertainment updates soon, but for today, here's a brief rundown of the little breakaway I had this last weekend. 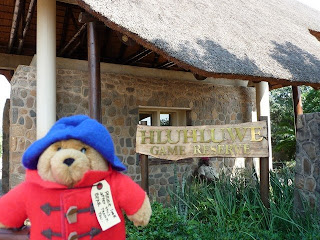 Basically the bf and I (as well as Paddington Bear on his first proper African safari) headed up the KwaZulu-Natal coast, driving 3 hours from Durban, to spend the weekend at the Hluhluwe Game Reserve. We weren't actually staying inside the reserve at the self-catering Hilltop Camp chalets, or any of the bush lodges; instead we spent Saturday night at the 3-star Protea Hotel Hluhluwe & Safaris, which is just 15 minutes drive from the game reserve.

Although our room, at the start of a corridor, was a bit noisy, our hotel experience was great. Sometimes hotels that belong to big chains can be quite soulless and generic, but Hluhluwe Protea Hotel still has a lot of charm, with African wood carvings and cast iron animal statues dotted all over the place... as well as several peacocks roaming the hotel grounds. Plus, the staff were very friendly and attentive (they fill wine glasses VERY generously), and the buffet meals, especially the dinner, were to die for. Mains included roast lamb, sweet & sour chicken, dorado and a magnificent kudu stew). Nom nom nom.

So, yes, I highly recommend the hotel to anyone wanting a bush holiday experience with some budget-friendly luxury. For R340 a person (not much for foreigners at all, really) you can even go on 3-hour tours of the game park in the hotel's fleet of elevated safari trucks, led by a knowledgeable guide. 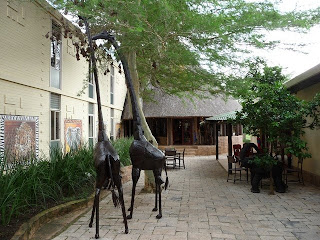 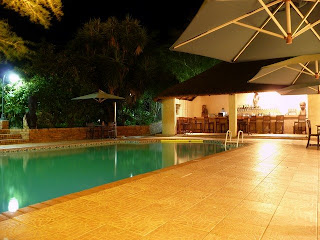 Anyway, as for our wildlife experiences inside the reserve, in our 2 days we managed to see 3 of the Big Five - buffalo, rhino and elephant. The lions and leopards were, as usual, acting like prima donnas and were nowhere to be seen. In fact, all the big cats, hyenas and wild dog seemed to stay far clear of the main tarred roads, as well as the side dirt ones. As a sidenote, you actually don't need a 4x4 vehicle to navigate Hluhluwe - the roads are all in very good condition.

One of Hluhlwe's big drawcards is its large rhinoceros population. In most game parks in South Africa you usually struggle to see any. In Hluhlwe you're doing something wrong if you DON'T see at least one. In our case we saw several, including a mom and tiny, hornless calf. This one below was sleeping in a dirt patch just inside the park entrance early on Sunday morning. 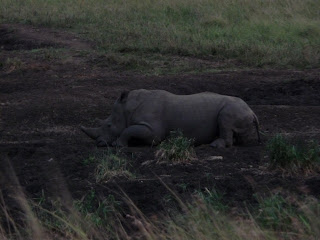 Other viewing highlights of the weekend included a troop of baboons on the move in the late afternoon, dung beetles at work, a couple of buffalo cooling off in a mudbath, a small group of zebra on the main road, nesting fish eagles and plenty of cocky, confident warthog, who are always fun to watch. Plus there were the usual giraffe, impala, nyala, and wildebeest. 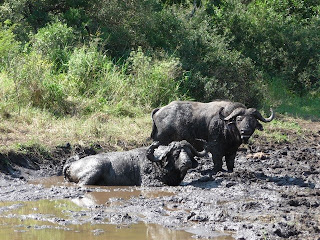 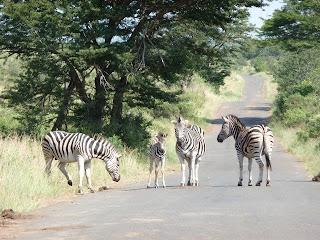 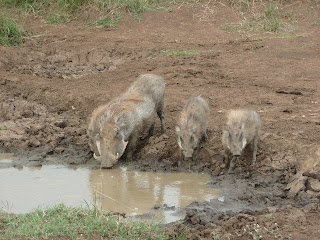 One thing you learn pretty quickly, apart from training your eyes to identify animal life in the bush, is to also keep an eye open for halted vehicles on the side of the road. Stopped cars, and safari trucks racing off in a certain direction, mean there's something good to look at. It was because of a clustered group of vehicles down in a valley that we got to see this herd of elephant trunk-wrestling and generally messing around by a watering hole on Sunday afternoon. 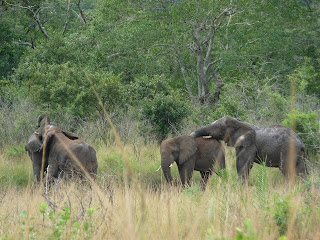 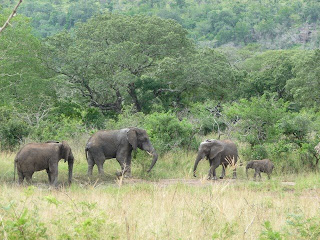 So yeah, it was a very enjoyable few days, escaping the usual routine and getting closer to nature. For the record, it's R45 a day for South Africans to enter Hluhluwe Game Reserve, and R80 a day for foreign tourists. It's also worth beairng in mind that animal sightings are generally pretty poor around midday, with your best viewing around sunrise and the late afternoon. Come midday, most people seem to have a long lazy lunch at a picnic spot, or head back to their accommodation for a snooze to pass a few hours before leaping back into their cars. 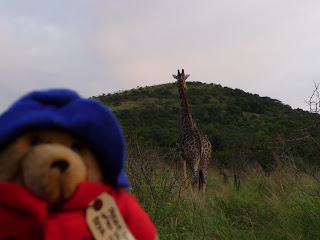 Out and About Personal Travel