The most high profile of these new releases is Monsters Vs. Aliens, which I've profiled before. Dreamworks' comic homage to old B-grade science fiction and horror films, this CGI-animated film would appear to be the big family movie for the Easter school holidays. Monsters Vs. Aliens is showing in both traditional and 3-D formats and looks like a lot of fun. The film shot to Number 1 at the American box office last weekend and is currently sitting on a Fresh 69% at Rotten Tomatoes.

WWE fans may be keen to see John Cena's latest bid for movie stardom, 12 Rounds, in which the tough guy plays a New Orleans cop who is forced to participate in a series of cruel challenges when a criminal mastermind kidnaps his girlfriend. Renny Harlin, the man responsible for Die Hard 2, The Long Kiss Goodnight and ... erm... Deep Blue Sea, is in the director's chair but although he knows how to make a rousing action film, he really hasn't made anything good in over a decade now. 12 Rounds looks like a derivative PG-13 hybrid of Speed, Saw and Die Hard with a Vengeance, but it's probably a perfectly harmless, unchallenging way to pass a few hours. Just be aware it scored 23% on Rotten Tomatoes.

I hadn't even heard of Soul Men until I saw it was released today. This comedy-drama stars Samuel L. Jackson and Bernie Mac as 2 estranged back-up singers from a legendary 1960s soul act. When the band's lead singer dies, these 2 very different men agree to reunite for a tribute show, and that involves a raunchy cross-country road trip. For fans of the funny man, this was Bernie Mac's last film before he died of lung disease last year. By the sounds of it Soul Men, although not especially original, is not necessarily a bad final movie to round off a filmography.

For the second time in 3 weeks, a local comedy is making its debut in South African cinemas. Finding Lenny stars South Africa's favourite stand-up comedian Barry Hilton as a man whose 50th birthday turns out to be the worst day of his life. Having lost his job, his wife and faith in humanity, Lenny has a shot at happiness when he's stranded in a remote rural village and roped into coaching a decisive soccer match between the locals and sinister property developers. Frankly the plot of Finding Lenny sounds all over the place, but who knows what the film is like? I haven't seen any reviews anywhere, but I'm sure it has more substance and makes more sense than any lowbrow Leon Schuster comedy. 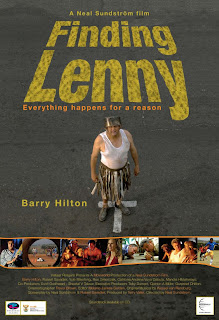